Mohsin Hamid: ‘Writing a novel is more like digging a well than climbing a mountain’

Mohsin Hamid’s The Reluctant Fundamentalist was an international bestseller and is about to hit the big screen, starring Kate Hudson, Kiefer Sutherland and Riz Ahmed. His new novel is called How To Get Rich In Rising Asia. Is it really a self-help book? Or is it a 21st-century Great Gatsby? 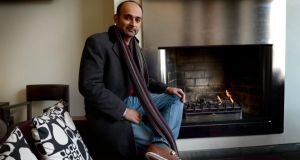 Mohsin Hamid has done it again. His 2007 novel, The Reluctant Fundamentalist, hit the zeitgeist jackpot, its apparently artless structure – just two men sharing a meal in a cafe, one of whom never even speaks – managed to encompass not only 9/11 and the war on terror, but the crisis in global capitalism as well.

His new novel, How t o Get Filthy Rich in Rising Asia – written as a self-help book with chapter headings such as “Move To The City” and “Be Prepared To Use Violence” – is so easy to read that the pages practically turn themselves. Yet it explores the ethical intricacies of bubble economies, the looming environmental catastrophe of water shortages and more besides.

How does he do it? “I try to write novels that I would like to read, and I try to write in an open way – a democratic way,” Hamid says. “Because most of the people that I grew up with didn’t read literary fiction.” He sees fiction, he adds, as play. “Novels are make-believe and play for adults.”

Hamid has found himself a wide and varied readership. Shortlisted for the Man Booker prize, The Reluctant Fundamentalist was a huge success in his native Pakistan and is a book-club favourite in his adopted UK. It is a staple on reading lists for Irish secondary schools; and a clutch of US colleges gave free copies to new students “to offer a common topic for discussion and focus energies on reading and intellectual debate”. One reviewer, meanwhile, has compared How t o Get Filthy Rich i n Rising Asia to The Great Gatsby.

But if Hamid’s novels are easy to read, that doesn’t necessarily make them easy to write. Each book takes about seven years from start to finish.

“It’s about digging a hole and seeing what fills it,” he says. “So it’s about solitude and time and nothingness. For me, writing a novel is more like digging a well than climbing a mountain – some heroic thing where I set out to conquer. I just sit quietly for a few years, and then it starts to become something.”

Before he was a writer, he was a reader. “As a child I read all kinds of stuff, whether it was Asterix and Obelix and Tin Tin comic books, or Lord of the Rings, or Frank Herbert’s sci-fi. Or The Wind in the Willows. Or Charlotte’s Web. I was an omnivorous reader – and so it was obvious to me that there were lots and lots of different ways to tell stories.”

Masters’ voices
He also studied creative writing with Joyce Carol Oates and Toni Morrison. “It was amazing, and they were very generous with me,” he says. “When writers of that calibre are reading your work on a weekly basis and responding to it, talking to you about it, you begin to think that maybe you can do this.

“When you’re starting off, the idea of one day writing novels, publishing novels – maybe making a living out of it – seems so improbable that it’s a huge blessing to have that kind of experience. I look back today and think, I would never have been a writer if not for them.”

Hamid’s deceptively effortless fiction is actually a stew of influences and ingredients. The modernism of Camus, Calvino, Borges and Nabokov fuelled his interest in formal experimentation. The Sufi poetry and song of his childhood provided the example of apposite second-person narration – as did the 1970s computer game Dungeons and Dragons . “It’s a text-based, role-playing game which is all about stories. ‘You’ do this, ‘you’ do that. And then, of course, as a child, I was running around pretending to be an island or a boat.”

Learning and forgetting languages
At the age of three, a fluent Urdu speaker, he had to learn English in California. When he returned to Pakistan he had to relearn Urdu once more.

“I’m not sure that I have really a language of my own,” he says. “I think that even now I gravitate to speaking like the people around me. So I don’t feel that I have a voice, in that sense. The English language is the English language, but there are a million permutations of it – so that makes me inclined to finding the right voice for each novel, as opposed to trying to find my ‘own’ voice.”

As a novelist, he adds, a blurry sense of self can be an advantage. “What we call ‘the self’ is a story. The story that I went to America at three, and I lost my language, and then I went here, and . . . it’s a story. The actual biochemical construct that is sitting here, opposite you, is not a perfect match for that story.

“Often times I’ll do things and I’ll say, ‘I’m not myself today’. Or, ‘That was a really unpleasant thing to do’. But it’s not that I wasn’t myself. It’s that the story-that-is-myself isn’t entirely true. Or doesn’t entirely describe who I am. I think there’s a natural link between the fact that our self is a story that we make up and that we’re drawn to stories. It resonates, in a way.”

How t o Get Filthy Rich i n Rising Asia has great fun with the tone and structure of the self-help book. Did Hamid read many of those worthy tomes, by way of research? “No. I didn’t read any,” he says. “I didn’t have to. We are immersed in a self-help discourse. So much of newspaper and magazine writing is how to have six-pack abs, how to get a good job or a raise, how to impress the woman that you want.”

How to Get Filthy Rich in Rising Asia is much, much more than the book it starts out pretending to be. It’s a funny, sassy book – but also a heartbreaking one, not just for its portrayal of the teeming cities of southeast Asia but for its moments of improbable tenderness. Its author has described it as “a secular Sufi poem”.

“I did want to write a book that, in a way, was a guide to getting filthy rich,” he insists. “But along the way, discovering that that isn’t what it’s all about.”

How to Get Filthy Rich in Rising Asia, by Mohsin Hamid, is published by Hamish Hamilton


‘THE FILM IS A STATEMENT FOR WORLDVIEW THAT I BELIEVE IN’
With the big-screen version of The Reluctant Fundamentalist opening here on May 10th, Mohsin Hamid is not just enthusiastic about the film itself – “I think it’s wonderful,” he says – but about the whole world of film: the scale of the enterprise; putting a movie together; being on the red carpet .

Could there be a novel in it? Hamid laughs. “There might be,” he says. He is, however, unusually clear-eyed about the differences between the sort of storytelling that takes place on the page, and that which takes place on screen. “The Reluctant Fundamentalist, is about ambiguity,” he explains. “You have one half of a conversation – which is a very destabilising position to be in, as a reader – and so you spend the entire novel standing on one leg, trying to balance yourself.

“At the end of the novel you’re still standing on one leg. It just ends. It doesn’t say, ‘Okay, put your foot down – we’re done’. And so you’re left not only destabilised, but just standing there waiting for something. And whether you’re curled up into a ball or with your arms spread wide – whatever position you took reflects who you are as a human being.

“In the film, that ambiguity is resolved. But the film offers something the book can’t – which is an Indian director (Mira Nair) casting A-list Hollywood actors (Kate Hudson, Kiefer Sutherland and Liev Schreiber) supporting a British Pakistani leading actor (Riz Ahmed). The sheer generosity and internationality of that means that the film is a statement for a kind of worldview that I believe in. That’s what makes the film special. But it’s something very different from what makes the book special.”