Mick O’Farrell: writing about the Rising

‘If you love research, then not only are you lucky, but your book is half written already’ 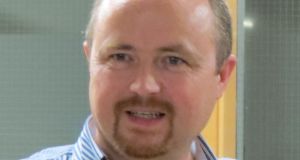 Mick O’Farrell: “it worries me that physical books are now referred to as the “traditional version”, which seems to give them a sort of quaint, archaic, air, as though to handle a printed book is already to touch something from the past”

Mick O’Farrell has been studying the 1916 Easter Rising for 20 years, and writing about it for over 16 years. His first book was published by Mercier Press in 1999 – A Walk Through Rebel Dublin 1916. His latest, The 1916 Diaries of an Irish Rebel and a British Soldier, is based on the personal diaries of two ordinary men fighting on opposite sides of Ireland’s Easter Rising.

In my early teens, I picked up a small almanac kind of a book – an attractive pocket-sized book, full of information on tides, distances, feast days and the like. I wish I could remember its name. It also had a section of quotations and sayings, one of which has stuck with me ever since – see below.

Nurseryland Annual 1970 – a book of rhymes and poems, brilliantly illustrated by Anthony Hutchins. (I had to do a lot of Googling to put a name to the memory!)

Very hard to choose – as a collector of books on 1916, my latest acquisition is usually my current favourite.

Charles Dickens’s Jacob Marley – particularly as portrayed by Frank Finlay in the 1984 movie adaptation of A Christmas Carol.

Definitely printed books. Watch someone when they pick up a new book and look at how they run the palm of their hand across the cover – printed books have a tactile attraction that has no digital equivalent. Nevertheless, it worries me that physical books are now referred to as the “traditional version”, which seems to give them a sort of quaint, archaic, air, as though to handle a printed book is already to touch something from the past.

Typeset book: A Folio Society edition of The Twelve Caesars by Gaius Suetonius. It’s a handsome slip-cased edition from 1964 – not valuable and not particularly beautiful, but it was a special gift, so it has a special place.

Handwritten book: The tiny 7x6cm diary that Volunteer Seosamh de Brún kept while under fire in Jacob’s during 1916.

Oh, to have a “writing space” and a “writing time”! I write wherever I can, whenever I can. Although, if a deadline is approaching, then you’ll most likely find me at the kitchen table late at night, listening to crooners on internet radio, cold and uncomfortable, but typing and happy.

Cormac McCarthy’s All the Pretty Horses.

I discovered Seosamh de Brún’s diary in 2006, and it took me till this year to get it into print. The research wasn’t constant, but did span eight years. If independently wealthy, I could have done it in eight months (well, I’d love to try).

Tolkien’s The Lord of the Rings.

1. If you want to write, and think you have something to write about, then write. Don’t wait – don’t think you need a certain amount of free time, or a comfortable desk. You don’t – just write whenever and wherever you can. However, if free time and a comfortable desk come along – grab them!

Unfortunately towards the digital end of things, with printed books becoming curiosities. Hopefully we’ve got another couple of decades before the tipping point, but I fear that may be optimistic.

The importance of good punctuation.

The value of research – as a writer on history, research is obviously vital, but the benefits to be gained from a bit of research and fact-finding for other aspects of life can be surprising!

Hard to choose from the many within Hunter S Thompson’s Fear and Loathing in Las Vegas.

They say “write what you know”, and I know 1916, so the book would be centred around the rebellion that year. As for the figures involved, I’d write about some of the real, but larger than life, civilian eyewitnesses to the rebellion, whose testimonies I included in my 1916 – What The People Saw book last year.