Michel Faber: ‘For a long time now, I’ve despised literature for its impotence to change the world for the better’

Michel Faber’s latest book was written while caring for his wife, Eva, who was dying of cancer. He calls it ‘the most deeply instinctive novel I ever wrote’ 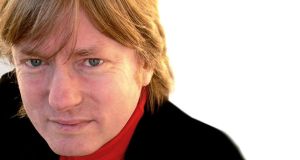 ‘I don’t see the point of dutiful adaptations. I want a movie to be a great piece of cinema in its own right.’ Michel Faber, author of Under The Skin

Over the past 20-odd years, Michel Faber’s writing has been anything but predictable. His first novel, Under The Skin, examined life along a remote Scottish motorway from the perspective of a dog-like alien who had undergone extensive reconstructive surgery. His second, The Crimson Petal and the White, was set in Victorian England and investigated class, sex and the moral issues of the time.

Born in the Netherlands, but raised in Australia, Faber has lived in the UK since the late 1980s and his eye for noticing the uncanny and strange hidden beneath the everyday habits of British culture has helped to give his books both keen insight and a wry sense of humour. His latest novel, which he claims also to be his last, is called The Book of Strange New Things and it follows a Christian missionary named Peter as he attempts to bring the word of God to an alien people on the other side of the universe while his wife, Bea, deals with the world falling apart back home. Written while caring for his own wife, Eva, who was dying of cancer, Faber’s final book is a heartbreakingly intimate look at love, faith and what matters in cases of life and death. Ahead of his appearance on Sunday at the West Cork Literary Festival, he discusses why he loves unfaithful adaptations of his work , his struggle with religion and the overlaps in his life and work.

‘The Book of Strange New Things’ is apparently going to be your last book, and it seems to share some themes with ‘Under the Skin’, your first. Like, how painful it can be, but how necessary and rewarding too, to ask what it is that make us “human”, and what’s a life worth caring for? Did The Book of Strange New Things feel in any way like a return to the ideas that had been in your head during ‘Under The Skin’?

There are connections between Under The Skin and The Book of Strange New Things, and not just the obvious ones that might occur to a casual reader like aliens and the sci-fi setting. In much of my work I’m tackling alienation and the various gulfs – cultural, sexual, political, generational, linguistic, historical, etc – that make it difficult for one human being to understand another. But in this book I got back to the essence of it. It wasn’t a planned approach. This book was the most deeply instinctive novel I ever wrote. And the fact that my wife was terminally ill throughout the writing of it had a huge effect on it.

It seems there’s a doubt about writing which is really central to The Book of Strange New Things. All the letter writing, the focus on the bible. All the time, we’re reminded that Peter is best just speaking, being with someone physically, otherwise the distance gets too much. Do you doubt the power of the written word to bridge the gaps between people?

For a long time now, especially since the Iraq and Afghanistan wars, I’ve despised literature for its impotence to change the world for the better, its inability to dissuade or enlighten the people who do harm. Sometimes I think that language as a whole is an irrelevance, that all the true motivations are non-verbal. (I was writing about this as far back as 1996, in a story called The Tunnel of Love). But language is all we have. And although The Book of Strange New Things expresses that despondency and frustration about communication, it’s a kind of love song to intimacy and good intentions as well. And good humour. At one point, Peter laments to Bea that he would need to have the skills of a novelist to describe to her what he’s seeing and experiencing. The reader can relish that, because you’re experiencing everything in technicolour and sensurround via my prose, while Bea has to make do with Peter’s absurdly crappy letters. The gulf is terrifying but also funny.

How did you feel about the translation of Under the Skin to the screen? What was it like for you to see the ideas in the book handled so differently?

I loved it. And the ways in which it diverged from my book and jettisoned my material in favour of Glazer’s own vision were my favourite things about it. I don’t see the point of dutiful adaptations, especially if the book has a rich internal consciousness which is impossible to convey onscreen. I want a movie to be a great piece of cinema in its own right.

A story of mine called The Fahrenheit Twins – very tranquil, eerie atmosphere – got adapted for stage by a company called Told By An Idiot, and they did it as a knockabout, almost slapstick play. The actors were in constant motion, it was very high-octane. I loved it.

My positive feelings about the Under The Skin movie are partly because I was so relieved that my wife got to see it before she died. She’d been waiting for it for 10 years and was already in hospital when I took her out to the premiere. If it had been faithful but mediocre, she would have been very disappointed.

Religion plays a central role in the new book. Has that element of your work changed over the years?

So much of my work tackles the religious impulse. My favourite character in The Crimson Petal, Mrs Fox, is a very devoted Christian. I’ve always been ambivalent about all that. I lost my faith at a young age and went through phases of being extremely angry with religion. Nowadays, I’m overwhelmed by the sadness of human vulnerability, the burden of grief and loss we have to bear. If religion can help people through that stuff, it deserves respect. We need to find the strength to behave with grace and kindness, and it’s not for me to judge or dictate where people should find that strength.

You have taken a fairly hands-off approach to publicity over the years. Is this a way of trying to let the work stand for itself?

This is a complicated issue. Maintaining a respectful distance between life and work is more important for a writer like Hanif Kureishi, say, or James Joyce, because there’s so much overlap between the author’s autobiography and what gets recycled in the fiction. I don’t have to worry about those boundaries being misunderstood because my work doesn’t exploit my life in that way. It’s perfectly obvious to anyone that I’m not a 19th century teenage female prostitute or an extraterrestrial predator.

On the other hand, I’m writing about real feelings and insights that are deeply personal to me. In your questions, you’ve been careful to focus on the work rather than on the circumstances under which I wrote this novel – caring for my wife as she was dying. I don’t actually object to such questions, as Eva was hugely important to me and The Book of Strange New Things tackles a lot of the issues that we were dealing with as she was preparing to let go of her body and leave the planet.

On the other hand, I do get fed up when an interviewer engages me in literary conversation only to publish a predominantly personal piece. I felt embarrassed recently when someone from The Observer interviewed David Mitchell and me together. David has very interesting things to say about the process of writing; he’s a very thoughtful and insightful man. But when the feature was published, its focus was very much on the “human interest” angle of me and my loss of Eva. A missed opportunity, I felt.

Michel Faber is at the West Cork Literary Festival on Sunday at 3pm. westcorkmusic.ie