In his new novel, the author of The Hours set out to avoid the tropes of fictional drug-taking. He talks about how Aids created new gay families, the power of three, and why he loves Joyce’s The Dead 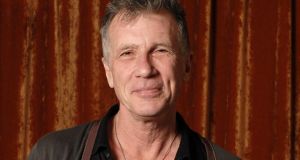 Michael Cunningham: ‘There’s only one story about people’s relationship with drugs: that it’s foolish, that it’s about escaping from reality, and you have to stop right now.’ Photograph: Ulf Andersen/Getty Images

In the mid-1990s Michael Cunningham began working on the kind of book that makes publishers smile dutifully and sigh. The story centred on three women of different generations, all connected by Virginia Woolf’s book Mrs Dalloway. One character is Woolf herself, as she descends into mental illness, and the book – The Hours – ended up winning a Pulitzer Prize in 1999, and was made into an Oscar-nominated film starring Nicole Kidman.

Sitting in a small, chic London hotel on a leather couch, Cunningham smiles broadly as he recounts the story. “My agent and editor said to me that this was going to be my ‘arty little book that would sell a few thousand copies’, and after submitting it, I promised them that my next one would be a commercial bestseller. But it just goes to show that you can never know what readers will go for, so you might as well write the book you want to write.”

Cunningham is tall, tanned and speaks in slow, lyrical cadences. He thinks about everything he says for a moment before answering, and as writerly a tic as this is, his artistic ambition when younger was to be a painter. The visual appealed to him, but something about the act of painting “didn’t feel right”. (He later wrote about an art dealer in his novel By Nightfall.)

“For some reason, it wasn’t holding my interest and I kept not wanting to paint. I asked myself, why is that? What’s up? So then I took a writing class. I didn’t feel especially good at it but almost immediately – and this has remained true for decades – I was bottomlessly interested in the proposition of trying to approximate life by only using ink, paper and words.”

As part of the acclaimed MFA programme at the Iowa Writer’s Workshop, Cunningham wrote short stories but quickly realised the form didn’t suit him. His first novel, Golden States, appeared in 1984, but it was 1990’s A Home at the End of the World that made people notice his work. (Interestingly, the book’s final chapter is actually his short story White Angel.)

Examining the latter book from the vantage point of 2014 reveals how progressive a narrative it is. It tells the story of a burgeoning friendship between two teenage boys, which becomes sexual. They are reunited years later and Bobby becomes involved with Jonathan’s flatmate Clare. It’s a complex exploration of how we define family units.

“That book really came out of my life then as a gay man who survived the Aids epidemic,” says Cunningham. “One of the revelations about all these people getting so ill was the fact that some people’s biological families came through for them, and some hung up the phone and never spoke to their sons or daughters again. So we formed these ad hoc families out of necessity. Suddenly the family wasn’t mom, dad and siblings – it was a couple of disco bunnies and a drag queen.”

Cunningham lost friends to the illness and the sense of loss was catastrophic for the gay community. “It became clear that these families held together as well as a biological family. We did all the things that only parents would do for you: we argued with doctors, sat in hospitals, made funeral arrangements, and it occurred to me that someone should be writing about these kind of families. I wanted to acknowledge them but not romanticise them.”

Cunningham’s work has often focused on a small group of characters, frequently a trio. He likes the potential for conflict that three provides. “Two people are symmetrical; there’s a direct line, whether they’re sitting beside each other on a sofa or in different continents. Three is there in the Holy Trinity and the three acts in a play. It just keeps coming up. It’s my favourite number.”

His latest novel also features a compact cast and three interconnected lives. In The Snow Queen, Tyler is a fading musician who cares for his terminally ill girlfriend Beth. His younger brother, Barrett, also lives with them in Brooklyn, and his life hasn’t amounted to much. The novel opens with Barrett experiencing a vision he believes is a catalyst for him to change his life. Tyler has a cocaine problem, which he partly justifies as a coping mechanism due to the demands of being Beth’s carer. One motivation for this book was the one-sided nature of drug-taking in fiction, ie the ubiquitous cautionary tales of depravity and ultimately death.

“There’s only one story about people’s relationship with drugs: that it’s foolish, that it’s about escaping from reality, and you have to stop right now. Drugs are enormously popular, and people have different relationships with them,” says Cunningham. “People seek altered states for all kinds of reasons – what about Cocteau, or Carlos Castañeda? I wanted to write about a character whose relationship to powerful substances wasn’t just the trope.”

He also says that, although he doesn’t usually base characters on real people, Beth and Tyler are versions of two individuals he knows (he showed them the manuscript and they were fine with it). The book’s title – which the writer says came to him right away – is borrowed from Hans Christian Andersen’s dark fairy tale, but it’s not a reboot or reimagining. “I told [my editor], ‘Look, if anyone brings the book back to the bookstore and says it’s not Hans Christian Andersen, I’ll repay them myself.’ ”

When it comes to literature and snow, it’s difficult not to think of James Joyce’s The Dead. Cunningham starts to quote the “snow was general all over Ireland” line, and, given his immortalisation of Woolf in The Hours, it’s no surprise that he admires another modernist.

“Woolf hated Joyce, and I don’t know if Joyce even knew that Woolf existed. He was utterly unconcerned about her, but we can love them both. For me, The Dead in particular is one of the greatest works of art of the 20th century.”

Cunningham’s surname suggests a link to Ireland, but his father confessed the name was an invention – and not even legally changed – by his Croatian grandfather. For a storyteller, it’s a fitting synthesis of fact and fiction.

Cunningham writes consistently and says he throws away a book’s worth of pages with each novel. Does writing get easier – or more difficult – the older he gets? “It gets differently difficult but your ambitions increase, as they should. With a first novel, your main ambition is to finish the goddamn thing, and then you write another one. You want each novel to be bigger, truer, deeper than the last one. A novelist, by definition, is someone who spends his whole life trying to write a novel by writing them, and then you die still learning.

“If I was writing short stories I couldn’t bear it. I would be like, ‘Every three months you have to start over again? You’re kidding.’ How you write is down to temperament and wiring, and the kind of person you are.”

The Snow Queen is published by Farrar, Straus & Giroux