It has taken 10 years for Mia Gallagher to follow up her debut novel, but the almost labyrinthine Beautiful Pictures of the Lost Homeland is well worth getting lost in 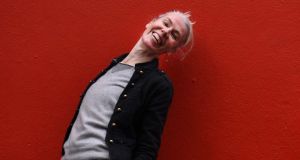 Mia Gallagher: “The imagination is a way of getting away from things that might be tough in reality.” Photograph: Clodagh Kilcoyne

Mia Gallagher’s debut novel, Hellfire, was a resounding critical success – one of the best debuts of the year, according to the Observer – which saw her being compared to Angela Carter, James Plunkett and Laurence Sterne. But that was back in 2006. It has taken 10 years for Gallagher to publish her second novel, and Beautiful Pictures of the Lost Homeland is a very different book.

“My first novel was, ‘Well, I’m asking people to get on the back of this mad horse and it’s just going to go forward’,” she says. “Whereas this one is like a strange cubist structure that I’m asking people to enter – almost like a labyrinth, but not quite – and they mightn’t know where they’re coming out.”

On top of this, Beautiful Pictures of the Lost Homeland weighs in at nearly 500 pages; even the most adventurous reader might be tempted to flee in terror. In fact it’s a book to escape into rather than from: a fully realised world, or set of worlds, into which the reader can slip with ease.

“I’m very interested in worlds,” Gallagher says. “I’ve always read a lot of sci-fi. My dad’s a real sci-fi buff and would leave his books in the loo. I’d read them as a kid. I find it very magical. For me, that’s what the imagination is: a way of getting away from things that might be tough in reality. I love this idea that you can make the world different.”

There are four distinct strands to the book. In the present – that is, recession- torn 21st-century Dublin – Georgia Madden creates a series of audio “letters” to her estranged father, David. At the same time, in the Welsh town of Aberystwyth, an elderly Sudeten German woman called Anna Bauer describes her experience of forced migration after the second World War. As these stories unfurl, another story is revealed: that of Georgia’s childhood in 1970s Dublin, and the impact of an au pair called Lotte, who is Anna’s daughter. Meanwhile, a series of catalogue entries weave through the narrative, offering a guided tour through an imagined history of Anna’s lost homeland.

Gallagher calls this strand the Wunderkammer, which is German for “cabinet of curiosities”. It might also be called “Fun with Footnotes”, as it allows the author to go a bit bonkers with that often po-faced academic form. “I enjoyed them and had a bit of a laugh doing them,” she says. “The sarky tone really did just suggest itself to me. But the history is so serious and so ghastly and so horrible that, as I explored what the Wunderkammer was doing in the book, there became deeper reasons for the tone of those sections to be what it was.

“It was something I trusted, I suppose, like I trust a voice. If a voice comes to me and I feel I can believe it, I really try and use it – because writing’s so bloody hard that whatever seems to be giving something, I’ll try and lean in to that and see where it brings me. History is ridiculous. It’s completely ridiculous and completely predictable, when you look back from a big distance in time.”

Beautiful Pictures of the Lost Homeland explores very serious themes. There’s a lot of leakage in this novel: of gender, identity, nationality, and space and time. There’s also a great deal going on: an inquiry into the building of the Central Bank; a terminal illness and death; a road traffic accident; a terrorist attack; an architect’s conference; a Paddy’s Day parade; a heatwave.

There are big sweeps of time and history, but also individual moments, focused on and finely described. How on earth did Gallagher manage to hold it all together? Did she plot it all out in advance?

She looks horrified. “Oh, no. No. I didn’t plot at all. I’m not a plotty writer,” she says. “I wrote the different strands of the book at different times, and I approached their internal structure differently. Then I put them together. There’s this pattern of the rosary beads that goes through the book, and there’s a German word, regelmessig, which means ‘regular’. So there’s a regularity in the pattern.

“But I also had a huge amount of notebooks. And I did a total rewrite, 2012-2013. I had a bible: this big golden notebook with little colour-coded sticky tabs. I think all the character ones were grey and the Wunderkammer ones were pink. And then I addressed issues as I saw them.”

Although its structure appears to be fragmented, Beautiful Pictures of the Lost Homeland is unified by its strong central characters – the adult Georgia, in particular, is a joy to spend time with – so it comes as no surprise to hear Gallagher say that, as a writer, she always begins with character. This book began as an idea for a short story about an Irish au pair in Germany.

“I wanted to write about something German because my grandmother was German,” she says. “And then I found myself getting very interested in her childhood and her background. And then that became Georgie and David and Lotte. I got really interested in this sad little nuclear family in Dublin in the 1970s.”

As for the historical elements of the book, which might be unfamiliar to many readers, it turns out they were mostly unfamiliar to Gallagher as well.

“All I knew about the Sudetenland was from school – Lebensraum and so on,” she says. “But I started digging, and became fascinated with Bohemia. In 2008 I was reading a lot around the Third Reich at war, and how people ended up in places. Then I discovered this English academic who was writing about German female migrants in postwar England. I contacted her and went to meet her in London. And I said, ‘I have this character who presents as English but isn’t English. She says she’s from Czechoslovakia, but I know she isn’t’.

“And she said, ‘You know what? In 1947 and 1948, 1,008 women from the Sudetenland, ethnic Germans, were brought to England in an operation called Westward Ho’.” Gallagher had found a real-world model for Anna. She subsequently met up with a Sudeten German woman, and borrowed some of the rhythm of her phrasing for Anna’s narration.

Gallagher clearly revels in this kind of nitty-gritty historical detail. She is also, she says, an adrenalin freak. “Action is very important to me. Something happens in every scene. There’s always some change going on, even if it’s very subtle and even if it’s an internal shift.”

This may be connected to her interest in theatre; she joined Dublin Youth Theatre in her teens and has written plays and acted ever since, one recent role being that of Rosamund Jacob in Des Bell’s TG4 docudrama The Enigma of Frank Ryan.

“The great thing with a book, as opposed to a play, is that you can put in a lot of hints and misdirection, and I really enjoy that. I’m not interested in blinding the reader, or obfuscating, but in playing – ‘Do you want to come down this way?’ – and dropping hints and stuff like that. And that’s impossible to do in theatre. You can’t rewind. You can’t turn back the pages. I love Lee Child, because the plotting is just. I mean, he puts in something on page . . . maybe 25, and you go, ‘Ooh’. And I go, ‘Great. I’m gonna be looking out for that’.”

Of all the authors in all the world, I really didn’t expect Gallagher to single out Lee Child as an influence. But there are plenty of others. “I’m a very visceral and emotive reader,” she says. “I’m also very eclectic and unsystematic. I love Haruki Murakami and Angela Carter. I adore Jennifer Egan. Kate Atkinson – fantastic writer. And I love Lia Mills’s Fallen. Beautiful book.”

And what does she wish for her own book, now that it has finally come into the world? “I really want people to read the whole thing,” she says. “That’s why I wrote it. But I don’t want to spoon-feed the reader. Or to be predictable.” There’s not much danger of that.