Men on Trial review: An effective rethink of Irish masculinity 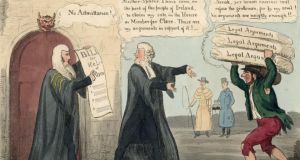 May 1829: Irish politician and activist Daniel O’Connell (1775 - 1847, centre) arrives to take his seat in Parliament after the passing of the Catholic Emancipation Act in April 1829. The act made Catholics eligible for a wide range of public offices.

The past year has provided astounding examples of men on trial: Brett Kavanaugh’s tears of outrage before the US senate judiciary committee; Conor McGregor’s defiant machismo in court for assault in New York; Paddy Jackson’s litigious fury on his acquittal. From the “good man”, to the hard man, to lads and their “banter”, what was once simply accepted as male behaviour has become increasingly visible and increasingly critiqued. Transposed to the scrutiny of the 21st century courtroom, masculinity appears a fragile, transparent performance rather than an innate manly power. The inherent theatricality of the courtroom – with its stage, audience, and critical public – illuminates the mantra of academic theorists: gender is performative.

Katie Barclay’s Men on Trial examines the ways in which masculinity was performed, assessed and produced in Ireland’s 19th century courts. Her study conceives the court as an arena that catalysed some distinctively Irish masculinities increasingly important to Ireland’s claim to independence. “Political conflict was mapped onto the bodies of men,” she writes, as patriotic plaintiffs emulated muscular virtue, and lawyers honed their gentlemanly skills.

In this account, Daniel O’Connell’s oratorical stamina, moral sensibility and manly virtue were gendered assertions of national and masculine superiority. Barclay’s approach as a historian of emotion is too rarely employed on Irish source materials. While most scholars focus on political questions, this study focuses on masculinity and gender foremost, offering a refreshing change of perspective. Examining men’s self-presentation through bodily deportment, their claims for authority, sympathy and credibility, and all the moral and class identities of those on trial and those trying them, Barclay shows how masculinity was central to “social, legal, and political power within courtrooms. Men’s performances of masculinity impacted on the justice they received from the legal system.”

Nineteenth-century law operated as a kind of manly theatre of authority, staged in Dublin’s Four Courts and touring the country in a network of provincial courtrooms and tholsels – once important public buildings in Ireland’s towns and cities. Courtroom architecture produced a specifically Irish form of justice. Fashioned by Irish architects and Irish materials, its space emphasised colonial privilege: members of the elite sat close to the judge, amplifying his legitimacy and restricting both lower-class and women’s access to justice. But courtrooms also included considerable gallery seating, placing the audience on the same eye level as the judiciary: a reminder of their public accountability. Such eyeballing mattered, especially in the political precarity of post-Union Ireland.

Men on Trial argues not only that the courtroom was a “microcosm of Irish society” but also that the press coverage of its proceedings shaped Irish national identity. Irish law was “rooted in Irish society” itself, a system modelled on the English but with distinct characteristics. Irish juries, Barclay notes, tended to acquit more often than their English counterparts, practising what David Lemmings has called “affective jurisprudence” – a less punitive form of “common sense” justice. Far from impartial, the Irish courtroom was also deeply emotional. As witnesses displayed their feelings for communal comment, in Ireland (unlike England) judges frequently wept at sentencing or during moving testimony. If stoic self-control became the dominant mode of British imperial masculinity, Barclay shows that Irish manliness retained a distinctly emotional sensibility. Displays of feeling were viewed positively as signs of moral responsibility in public office.

Barclay also finds suggestive comedy in these trial narratives. To the amusement of onlookers, in 1828 a drunken Jemmy Maguire hollers and dances with an unwilling constable. Several accused men reply to questions entirely in rhyme. Defendants could thus charm the jury to their advantage, deploying witty repartee or cosmopolitan literary references to vex professional lawyers. As Barclay stresses, storytelling and laughter could successfully register resistance to legal power.

Sometimes this was less edifying: sexual assault cases frequently occasioned derision; 1840s testimonies of sexual assault by Ann Farrell and Mary McCarthy, for example, were accompanied by court laughter. Rendered in “comic” dialect, the phonetic spelling signalled local accent but also possibly that they spoke in Irish, silently translated for an English-reading audience. The Irish language indicated poverty, damaging perceptions of witness reliability and forestalling legal compassion. Notably, masculine justice withheld sympathy to female plaintiffs who failed to conform to models of respectable victimhood. Readers recalling the laughter in the public gallery during 2018’s Belfast rape trial might wonder how far we have advanced.

Like the stage, the courtroom is a crucible of society. In its attention to local assizes and provincial newspapers, Men on Trial conveys a vivid cross section of Ireland: impecunious barristers, Dublin dandies, bankrupt schoolmasters, ascendancy eccentrics and respectable citizens all rub shoulders in this book. It thus complements Margaret Kelleher’s The Maamtrasna Murders: Language, Life and Death in Nineteenth-Century Ireland, where the bilingual courtroom’s inequities symptomise a fragile justice system broken by the land wars. By illuminating 19th-century masculinities, Barclay contributes to the vital work of rethinking the history of gender and masculinity in Ireland. Rebecca Anne Barr is lecturer at the National University of Ireland, Galway and editor of Ireland and Masculinities in History (Palgrave, 2019)