Maverick of the Russian masters

A new translation of the stories of Nikolai Leskov confirms that although different, he is the equal of Tolstoy, Dostoevsky and Turgenev 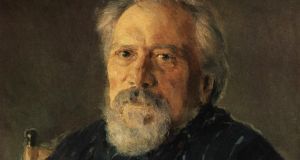 ‘Here is God’s plenty,” remarked the English poet John Dryden of The Canterbury Tales. A similar comment could apply to the work of the 19th-century Russian writer Nikolai Leskov (1831-1895), who had much in common with Geoffrey Chaucer. Both writers travelled extensively, and both were candid observers, sharing an interest in ordinary people. Most importantly, they were originals, and whatever about Chaucer being an obvious literary pioneer, living as he did in the late medieval period, Leskov, who is so often referred to as Anton Chekhov’s favourite writer – and he certainly influenced the young Chekhov – and whom Mikhail Bulgakov frequently praised as a master, is different in style and approach from all of the major 19th-century Russian writers.

There are several reasons for this, probably the most important being that he looked almost exclusively to an ancient Russia of traditional myths, fables and quasi-religious mysticism and superstition. He made inspired use of characters coming back from the dead to help drive a narrative along. The work straddles both worlds. Gorky saw him as “the writer most deeply rooted in the people” and completely “untouched by any foreign influences”. There was one foreign influence, though, and one to which Leskov himself drew attention, that of Laurence Sterne’s Tristram Shandy.

A younger contemporary of Dostoevsky and Tolstoy, Leskov is far less famous and has always seemed to drift in and out of fashion. It may be due to his penchant for unreliable narrators and his communal approach. His stories are just that: a narrator begins to tell a tale and gets prodded along the way by listeners impatient to know what happens next. Added to that is the richness of his vernacular, the wordplay and games and deliberate use of semi-literate speech.

Leskov knew he was impossible to translate, and he remains a challenge for any translator, because he set out to write the way people speak, regardless of the language in which they happen to be speaking. This is why his work is so exciting: bawdy, funny, human and shocking. What more could a reader want? All life – well, at least all ordinary Russian life – is here. To read the 17 fantastic stories in this magnificent volume is to wander freely, enchanted in the best possible way, enjoying the art of the storyteller.

“Storyteller” is the most apt word for Leskov. He does not invent so much as relate. His yarns are inspired by things he saw and heard while spending an intense two years travelling throughout old Russia as a young man. He was a natural sponge, eyes out on stalks, missing nothing and grasping the essential ambivalence of life and art. Structure and form did not interest him; his impulse was to hold an audience.

The role of the storyteller has become far more precarious than one might think, because of the way fiction has become more psychologically dense. Politics and polemic have tended to overshadow the more personal story as novelists begin to take a wider look at society and to place the individual within it rather than merely seeing it as a backdrop for the character.

Unsurprisingly, it took a reader as inspired as the great German critic Walter Benjamin to explain: “Familiar though his name may be to us, the storyteller in his living immediacy is by no means a present force. He has already become something remote from us and something that is getting even more distant. To present someone like Leskov as a storyteller does not mean bringing him closer to us but, rather, increasing our distance from him.”

Unsettling observation
Having made the unsettling observation that story is vulnerable: “Was it not noticeable at the end of the war that men returned from the battlefield grown silent – not richer, but poorer in communicable experience. What 10 years later was poured out in the flood of war books was anything but experience that goes from mouth to mouth.”

Benjamin refers to that experience as the source from which all storytellers draw. Leskov was religious yet detested ecclesiastical bureaucracy just as he resented political oppression. When his travelling came to a abrupt end – he had been working for his uncle, who could no longer afford to employ him – Leskov moved to St Peterburg and became a prolific journalist. Never the reactionary he was considered to be, he was very outspoken – as are his characters, none more so than the eponymous narrator of The Enchanted Wanderer, a sinner doomed to be dying without the relief of death.

That title piece dominates this astutely chosen selection because of its novella length and its unforgettable narrative voice of a giant man who, having killed an elderly monk by mistake when he was a boy, has endured a picaresque nightmare of a life.

Best read at a single sitting, it offers a fabulous entry not only into Leskov’s work but also into the Russia that produced him. All the energy, hunger and chaos created by the vast underbelly of a peasant population still existing within the hardship of serfdom festers though the narrative.

Elsewhere, in The Lady Macbeth of Mtsensk (1865), better known through Shostakovich’s opera, which premiered in 1935, Leskov revealed a daringly sympathetic attitude to Katerina, the young, childless wife, who, bored with her boorish older husband, takes a cheeky serf as her lover. The pair collude not only to kill her father-in-law and, on his return, her husband but also to murder a young boy who is the only heir. She is by then pregnant with the lover’s child.

The lovers are arrested, and on their way, by ship, to a prison camp, Sergei, the lover, turns against her and becomes involved with other female prisoners. She, maddened by jealousy and love, pushes one of her rivals into the sea. “Katerina Lvovna rose up almost to the waist, threw herself on Sonetka [her rival] like a strong pike on a soft-finned little roach, and neither of them appeared again.”

Staggering work
It is a staggering work, particularly for the way Leskov slyly manipulates our sympathy. It is the first story in the selection and makes for quite an opener. Also included is The Sealed Angel, as well the comic masterpiece Lefty. The most valuable comment any reviewer can offer on this volume of wonders, even allowing for the occasional modern idiom used, is an instruction to lock oneself up with it.

One of the many beautiful stories – because beauty, however unlikely it may seem, given the earthy voice Leskov has perfected, emerges throughout, such is its humanity – is The White Eagle. In that tale the narrator, a man burdened by his physical ugliness, beguiles with his kindness and his very human need for approval. He makes a comment that is true of Leskov’s vision in general and of translation in particular: “No matter how the storyteller tried to keep to the higher sphere of the incorporeal world, one could not fail to notice that the visitor from beyond the grave comes to earth in colour, like a ray of light when it passes through stained glass.”

Every serious teacher of literature advises readers to read the 19th-century Russian writers and then reread them. Leskov, the maverick, as different from Turgenev, Dostoevsky and Tolstoy as he is, with a more obvious affinity to Gogol, also deserves to be included in that immortal literary elite.