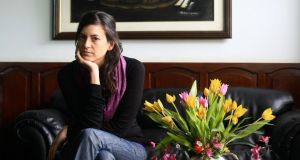 Argentinian writer Samanta Schweblin: her star is so high that her latest novel has come into English straight away. Photograph: Miguel Bellido/GDA/AP

Three years ago, Samanta Schweblin’s novella Fever Dream appeared in English and became the hit of the year for those readers who relish something nasty, brutish and short. (Guilty as charged.) It is one of those books of such an intense, disorienting atmosphere that you will always remember where you were when you read it.

Such a launch presents challenges as well as opportunities for the writer. Fever Dream was Schweblin’s first book to be translated into English but her third book overall: she had been perfecting her craft for more than 10 years in her native Spanish language by that time.

1 Quarantine process to be tightened as health officials grow nervous
2 US passengers fly into Dublin: ‘I’m here for six days. I guess I’ll have to stay inside’
3 White House turns its fire on Anthony Fauci over Covid-19 comments
4 ‘I thought it was a hoax’: Patient dies after Texas Covid party
5 Thomas Byrne denies being source of Barry Cowen drink driving story
6 Majority of employees don’t want to return to pre-Covid working patterns
7 Dirty money: How the Mafia plundered Italy’s public health system
8 Maureen Dowd: Biden has his limitations but he’s no Trump
9 High compliance with rule making face coverings mandatory on public transport
10 Back with our old friends at eir – and nothing seems to have changed
11 Una Mullally: Phoenix Park travesty is a litmus test for the Greens
12 Malachy Clerkin: Sleep well Jack, you made us all happy
13 How will the ‘Ryanair generation’ of emigrants fare post-Covid?
14 ‘People took their masks off as soon as the inspector passed’
15 Covid-19: Restrictions on travelling abroad may last several years, expert warns
16 Johnny Depp tells court he contracted superbug after severing finger
17 The $6bn judgment pitting Nigeria against Irish businessmen
18 Elvis Presley's grandson dies aged 27
19 Disease expert says jailing tourists who breach quarantine would send clear message
20 Almost 600 social and affordable houses given green light in Dublin
21 Forget bulging muscles; strength is all about nerves
22 ‘No live music’: Three words that strike at every musician’s soul
23 Number receiving coronavirus unemployment payment falls by 67,000
24 Actor Kelly Preston, wife of John Travolta, dies aged 57
25 The Offload: All eyes on Leinster’s academy intake
26 Ken Early: Another Mourinho masterclass in going through the motions
27 ‘He’s so strapping and virile’: Patrick Stewart at 80, by Shatner, McKellen, Grammer and more
28 I’m only starting to realise how much the pandemic affected my children
29 ‘It’s not normal to go to the toilet 15 times a day’
30 Live Aid: what was Bob Geldof’s famous F-word quote?
31 50 best Irish albums of all time – in order
32 Murder accused ‘at diesel laundering yard’ when detective shot
33 Homeworking is depriving me of juicy gossip
34 Quick, easy and delicious Mediterranean spiced-lamb wraps
35 If tourists are such pariahs should we not be testing them on arrival?
36 David McGoldrick reveals racist messages received online
37 Q&A: All you need to know about new face covering rules on public transport
38 First Look: Dig In, the Maser-curated ‘art diner’ that’s about to open in Dublin
39 Stunning image of comet Neowise captured over Dublin Bay
40 Keith Duggan: Bubba Wallace tweet shows just how troubled Donald Trump’s mind is
Real news has value SUBSCRIBE