Leonard Cohen’s quest for something higher

Cohen turns 80 soon, and the shelves will be heaving with newly published books about the poet of pop, which take in everything from his Jewish upbringing to the tryst behind the song So Long Marianne 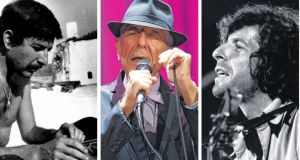 From left, Leonard Cohen working on the Greek island of Hydra; performing in Melbourne last year; and at the Isle of Wight festival in 1970. Photographs: from the book ‘So Long Marianne: A Love Story’; Graham Denholm/Wireimage; Tony Russell/Redferns

Leonard Cohen turns 80 in September: he is truly the grandaddy of pop stars. At a time when most rock stars would have long retired to their trout farms or villas, or gone to the great gig in the sky, Cohen has been touring practically non-stop, performing to rapturous audiences eager for words of wisdom from the poet of pop.

This wasn’t the way he expected things to turn out: Cohen had stopped touring in the mid-1990s, and had been spending most of his time meditating at a Buddhist retreat on Mount Baldy. But when he discovered that his former manager had stolen a huge chunk of his wealth, he was forced to come down from the mountain and go back on the road at the age of 74.

He did it with his typical gallows humour. Taking the stage at his first show, at Fredericton, New Brunswick, in May 2008, he told the audience: “This is the first time in 14 years I have stood before you in this position as a performer. Back then I was just a kid of 60 with crazy dreams.”

Cohen is taking a well-earned break from touring this year. He is rumoured to be working on a new album, so we won’t see his stick-thin, fedora-topped figure on an Irish stage any time soon. To fill the Lenny-shaped hole in our lives, we have the Leonard Cohen Festival, which runs in Dublin from tomorrow to Sunday, with a programme of music, film and readings (see panel).

We will also see a lot of him on the shelves of our local bookshop. This year, about 10 books on Cohen are being published to mark his four-score years on this Earth. April saw the publication of Leonard Cohen on Leonard Cohen: Interviews and Encounters (Chicago Review Press), edited by Jeff Burger, and with a foreword by Suzanne Vega. September sees the publication of Leonard Cohen: Everybody Knows by Harvey Kubernik (Omnibus), which charts Cohen’s life and career through the insights of band members and others who have worked with him.

The Wordless Leonard Cohen Songbook (Porcupine’s Quill) is a series of 80 wood engravings by George A Walker depicting various events and people in Cohen’s world, while On Tour with Leonard Cohen (Powerhouse) is a selection of photographs taken by his friend, bandmate and collaborator Sharon Robinson.

Few books out this year, however, will delve quite as deeply into Cohen’s complex psyche as A Broken Hallelujah: Leonard Cohen’s Secret Chord by Liel Leibovitz (Sandstone Press). Far from being a straightforward biography, A Broken Hallelujah is a trip through Cohen’s head space as he negotiates the rocky philosophical territory that comes with being a poet, musician and spokesman for a disillusioned generation.

Rather than simply chronicling Cohen’s life, Leibovitz looks at what the events in his life mean in a wider cultural context. He takes Cohen’s 1970 Isle of Wight festival appearance as his jumping-off point, chronicling the electrifying moment when Cohen sat in front of 600,000 recalcitrant festival-goers, most of whom had broken into the festival at the urging of an anarchist group, and calmed the crowd with softly spoken words of truth.

Cohen, writes Leibovitz, was not your usual priapic pop star in search of easy money, drugs and women. He was on a quest for something higher, and his work as a poet, then a novelist and finally a singer of downbeat, confessional folk songs were all mere tools in the service of a greater spiritual work. And the driving force was what his favourite poet, Federico Garcia Lorca, called duende, that deep sadness in the soul that begets great works.

Leibovitz’s account of Cohen’s teenage years reads more like a lesson in Jewish studies. We meet a confused nine-year-old Cohen at the time of his father’s death, writing a note to his deceased dad, putting it inside his father’s favourite bow-tie and burying it in the back garden of the family’s home in a well-to-do neighbourhood of Montreal. He has been looking for that note ever since, he told People magazine.

Cohen was born into a wealthy and influential Jewish family; his great-grandfather Lazarus Cohen had founded one of the city’s most prominent synagogues. Leonard was adrift as a teenager, but found a guru of sorts in his maternal grandfather, Rabbi Solomon Klinitsky-Klein, whose fiery, erotically charged readings of the prophet Isaiah had just the right mix of sacred and profane.

When Cohen started college in 1951, Canadian writing was fragmented and lacking in towering literary figures. The Americans had Thoreau and Emerson, but Canada had yet to forge something resembling a national literature. In the beat-generation atmosphere of the late 1950s, Cohen was in the perfect position to set himself up as an authoritative, hip voice in Canadian literature; his music career was still a decade away.

According to Leibovitz, Cohen’s “profoundly strange” move from modestly successful poet and novelist to singer-songwriter was prompted by the massive rise to stardom of another Jewish poet, Bob Dylan. Cohen’s songwriting style was stark, spare, in almost complete contrast to the flowery, sonically rich sound of the hippy generation, but he found a ready audience in Europe for his sparse, deeply spiritual vignettes.

A Broken Hallelujah is a rich, rewarding exploration of the ideas and ideologies that shaped Leonard Cohen’s artistic vision, and gives real insight into the creative forces that drove him onward.

The story behind the song

Cohen’s muse took him to New York, where he lived at the Chelsea Hotel, and to London, where he could, writes Liebovitz, “try to connect with the ghosts of Byron and Shelley and Blake”. And it brought him to the Greek island of Hydra, a haven for poets, writers and artists. One of those was a young Norwegian writer, Axel Jensen, who had moved to Hydra with his wife, Marianne Ihlen, and their infant son. Abandoned by the volatile and capricious Jensen, Ihlen met and began a relationship with the fascinating young Canadian writer with the gentle, measured personality.

The relationship lasted just a few years, but Ihlen became immortalised in one of Cohen’s most celebrated songs. You wouldn’t think someone could squeeze an entire book out of a rock star’s long-ago tryst, but So Long Marianne: A Love Story by Kari Hesthamar (ECW Press) is a well-drawn account of this young Norwegian’s life, peopled by a supporting cast of interesting characters. The first section feels like a long build-up to the arrival of its star character, but when Cohen finally makes his appearance, he doesn’t disappoint. This is a charming portrait of another life in another time and place.

This weekend, a biannual festival dedicated to Leonard Cohen will be coming to Ireland for the first time – but no, the man himself will not be in attendance.

The festival takes place from Thursday to Sunday at Dublin’s Liberty Hall. Among the events are: a screening of concert footage from his 2013 tour, which has been provided by Cohen’s manager, Ed Sanders; an afternoon of spoken word with John MacKenna, Dermot Bolger, Gerard Smyth, The Poetry Divas and Leif Bodnarchuk, the last of whom worked with Cohen from 2008 to 2013. Live music comes from Australian act Ali & The Thieves, along with Patricia O’Callaghan from Canada and Gerry Tully, The Van Diemens and Tír na nÓg. It’s an all-in event, which goes some way towards explaining the ticket price of €145.