Europe: A Natural History by Tim Flannery – bold and brilliant 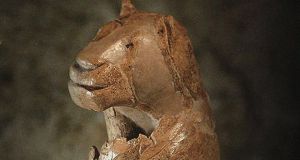 Seen from space, much of night-time Europe blazes with light, evidence of industry, urbanism and an existential restlessness that has long impelled Europeans to impose modernity on themselves and the world. Australian palaeontologist-ecologist Tim Flannery, author of The Future Eaters and The Weather Makers amongst many others, and discoverer of 29 species of kangaroo, explores what underlies the old continent’s insomnia, and the darker places between our electric islands.

He drills down through nameless, numberless layers, to expose a chthonic continent – when tectonics turned, seas dried and refilled, and centillions of alien life forms moved urgently across an indifferent Earth “without form, and void”, where “darkness was upon the face of the deep”. The world’s first coral reefs may have formed here, the first moles sifted soil, and hills were made by snails, while the earliest hominids came out of Europe before humans came out of Africa. He expertly conjures up successive exotic ur-Europes out of rare petrifactions and the cultures of the human centuries.

We “visit” Bal, Hateg, Modac and Tethys, the obscurely resonant names given to the primordial archipelago by theorists of deep time. We visualise giraffe-sized, leathery-winged Hatzegopteryx pterosaurs stalking out from Cretaceous cypresses to batten on blood, like Nosferatu – or the Langelian flood, when Atlantic waters cascaded 4km to fill the parched plain of the Mediterranean at a stupendous 10m per day, like a vision from Paradise Lost.

We reach down through rock to where we began, our faintly comprehensible antecessors who walked across a Suffolk storm beach 800 millennia ago – or, a mere 40,000 years since, ate each other in future Spain, carved the Lion Man of Hohlenstein-Stadel and the Venus of Hohle Fels, and speared or made obeisance to Transylvanian cave bears. A child and a dog explored France’s Chauvet Cave 26,000 years ago – the first unequivocal companionship of humans and canines – the adventurer smudging charcoal as they passed palaeolithic paintings to the already abandoned Room of Skulls. Great auks stood guard on Sicilian shores – cave lions’ roars split the Cantabrian night – mammoths, aurochs, giant elk and wisent made the north continent from Mayo to Masuria shake with their weight.

Europeans were becoming “the mind over their land”, and wilderness was everywhere under attack. Big and small animals fled into the margins, but even as they went left spoor in the new apex predator’s myriad mythologies. The dreamtime tale of Europa abducted by Jupiter in bull guise, or the Bronze Age bull-leapers of Knossos, borrow from ideas of aurochs (which, royally protected, persisted in Poland until 1627). Polyphemus the cyclops may have been inspired by a fabulist finding an elephant skull. Androcles’ lion was terrifying, yet noble – the leopards on Armenian drinking vessels lethal, but lovely. Even the loathed wolf – Charlemagne founded La Louveterie in 813 to wipe them out, which it essayed with efficiency until 1971 – suckled Romulus and Remus, and padded into heraldry and vexillography.

Secretive salamanders became basilisks, porcupines introduced by Moors grunted into the armorial bearings of Capetian kings, and alchemists kept toads (Europe’s oldest vertebrates) as lunar familiars. The Miocene bestiary might almost be medieval, and science could reinforce romance; 17th century clergyman Robert Plot identified a dinosaur fossil as a femur, but believed it had belonged to a giant from Albion-founding myth.

Palaeontologists were as colourful as their subjects, and good stewardship was seen in strange places. Sir Richard Owen pickled Gideon Mantell’s spine, but he also identified the largest venomous snake of all time (Laophis crotaloides – an allusion to Laocoön). Franz Nopcsa von Felsö-Szilvás loved a shepherd, aspired to Albania’s throne – and pioneered Cretaceous classifications. Romania’s bears owe their lives to Ceausescu. The Nazi-supporting Hecks saved Przewalski’s Horse. German soldiers digging an air-raid shelter in Athens found and preserved the first fossils of Graecopithecus. One could cavil about typos, or the hoary canard that medieval scholars were flat-earthers but any reservations are outweighed by bold and brilliant evocation of Europe’s forever vanished yet paradoxically present as engrams beneath our streets, in every landscape feature and wind soughing across “empty” spaces.

Flannery looks far forwards as well as back, to see how pre-prehistory might inform tomorrow – advocating updating taxonomy and laws on endangered species, restoring biomass, and sensitive rewilding. Wolves are already loping unassisted into Denmark, Flanders and Paris, and golden jackals have got to the Netherlands, as attitudes alter, and millions of hectares of farmland fall into disuse. Horace observed: “You may drive nature out with a pitchfork, yet she will hurry back”. Holland’s Oostvaardersplassen, England’s Knepp and a growing number of other places tantalise with tomorrow’s safaris, adventures to be had in a newly envisioned Europe, as new and returning species reconstitute a continent, and lay down the fossils of the future.