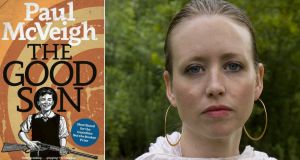 Laura van den Berg: Child narrators tend to be relatively free of, or at least less entrenched in, the self-narrating (the self-generated, and self-protected, stories of who we are and how we landed in our current circumstances) that often characterises adult life

In the world of the American creative writing workshop, I’ve encountered teachers who are tempted to place, or have actually placed, a moratorium on child narrators. Students love to write them, but children come laden with complications. How to render a young character with sufficient interest and insight. How to allow the private story of the character and the larger story of the adult world to coexist on the page. How to strike a convincing tone and voice, in an effort to avoid complaints along the lines of Come on now, would a six-year-old really know the meaning of the word proselytise? (Those are the types of comments that get a moratorium in my own classroom, but that is a story for another time).

The underlying concern, to my eye, is the worry that children, and even young teenagers, are not sufficiently deep enough for “adult” literature. Sure, children can be boring, intensely boring even – but plenty of adults are boring too, and fewer adults, I’d wager, dazzle as often with their unvarnished insights, unhinged imaginations, and intricate systems of dream logic.

Also: childhood itself is a naturally conflicted state. Children, and thus our young fictional narrators, can be at once oblivious to the precise complexities of adult life and hyper-aware, capable of viewing the world with both the deep wonder and extreme vigilance typical of people who are still feeling around for the rules of the spaces in which they find themselves, whose lives are not quite yet fully their own. They tend to be more sensitive to atmospheric shifts than duty-bound to logic.

Child narrators also tend to be relatively free of, or at least less entrenched in, the self-narrating (the self-generated, and self-protected, stories of who we are and how we landed in our current circumstances) that often characterises adult life. Children tell themselves stories, engage in self-delusion and fantasy, but those narratives are more evolving than calcified – and with that malleability comes both freedom and danger. In short, the vantage of youth can allow the work to capture a flickering corner of reality that the adult eye was always doomed to miss.

“Child narrator” is, of course, a broad term, one that covers a great deal of ground, from Salinger’s iconic Holden Caulfield to the five-year-old narrator of Emma Donoghue’s Room to one of my personal favourites, the uniquely gifted, tormented young woman who narrates Barbara Comyns’ The Vet’s Daughter (spoiler: her oppression leads to powers of levitation). For a more unconventional example, we can look to Yoko Tawada’s forthcoming Memoirs of a Polar Bear, which tracks the lives of three generations of celebrity polar bears – including the young Knut (through the eyes of an infant bear, human behavior starts to look radically strange). Jim Shepard’s most recent, and rightfully celebrated, novel, The Book of Aron, follows a young boy who, after the Holocaust robs him of home and family, finds shelter in an orphanage run by Janusz Korczak.

Into this esteemed tradition blazes Paul McVeigh’s The Good Son. From the start, Mickey’s voice is infectious, alive and uniquely his own, and also freighted with the troubles of the times: “I have very clear instructions. Don’t go to the top of the street cuz there’s always riots. Don’t go to the bottom of the street cuz there’s no-man’s-land and there’s always riots. Don’t go near the Bray or the Bone hills cuz that leads to Proddy Oldpark where they throw stones across the road from their side. Don’t go into the aul houses cuz a wee boy fell through the stairs in one and broke his two legs. I think his neck too. Ma could be exaggerating. Oh, and don’t go onto the Eggy field cuz there’s glue sniffers.”

Children exist in the worlds that adults create for them, both locally and globally, and their options are, by virture of age, often painfully limited. As a result, they tend to meet the world with both acceptance and resistance, and their straightforward rendering of dire times can newly and effectively defamiliarise those events for the reader.

Flannery O’Connor has argued that “Anyone who has survivied his childhood has enough information about life to last him the rest of his days.” Indeed. As we know all too well, our early years are formative in ways it can takes us a lifetime to grasp. Those years leave deep marks; in that way the stakes of childhood are inherently very high.

In an interview for The Book of Aron, Jim Shepard once spoke about how a compromised ability to decode the adult world is “the child’s situation all the time”. Childhood is, in other words, often less an innocent idyll than a state of perpetual bewilderment. In The Good Son, as the violence worsens, and as young Mickey’s own questions of identity and belonging grow more pressing, he turns out to be the ideal character to lead us deeper into the danger.

Laura van den Berg’s first novel, Find Me, was longlisted for the 2016 International Dylan Thomas Prize. She is also the author of two collections of stories, What the World Will Look Like When All the Water Leaves Us and The Isle of Youth. Both were shortlisted for the Frank O’Connor International Short Story Award