Review: Jay, the idealistic twentysomething at the heart of Kevin Maher’s second novel, is a memorable rogue with the best of intentions but some dodgy predilections 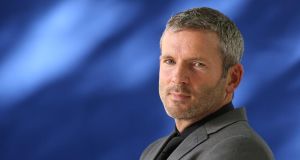 In his debut novel, The Fields, Kevin Maher took us to the Ireland of the 1970s, and 13-year-old Jim Finnegan. It’s a classic first novel, an Irish Bildungsroman, as Jim, the baby in a family of older girls, grapples with first love and his father’s cancer, not to mention predatory priests. Last Night on Earth, Maher’s second novel, is not a sequel but moves chronologically forward and has some of the same themes.

Jay, an idealistic twentysomething from Roscommon, heads for London in the mid 1990s. The reason for his departure is panicked and murky, and like many before him he finds work on building sites. Except Jay isn’t interested in backbreaking labour, and his ladder climbing involves reading and social betterment rather than struggling with a hod of bricks.

Blessed with determination, charm and chutzpah, Jay catches a further break when a TV crew shows up to make a programme about building-site life. Through a pal, Dublin Darren, and before you can say “plot swerve”, Jay lands a job making a documentary. There are dalliances with women, and then there’s Shauna, whom he falls in love with and makes pregnant.

The story is told in time shifts, from different characters’ points of view, and opens memorably, with the difficult birth of Jay and Shauna’s first child. On page 1, in 1996, Bonnie tumbles chaotically into the world; reflecting this, Maher’s prose has a frantic, uterine echo of Eimear McBride’s Girl (“birthy splatlets and baby driplets”) but quickly gives way to Jay’s voice. And what a voice: the book pivots around him, and from the moment he opens his mouth Jay is a whirling dervish of a character. Kinetic, relentlessly verbal and hard to dislike, he is a memorable rogue, a post-Ginger Man chancer with the best of intentions, mired by prohibitive flaws and dodgy predilections. His Irishness is a badge of pride, and his native language, rendered phonetically, seeps into the story. He woos Shauna with comic translations of “bookill dawna” – and she especially likes the Irish word for “word”, “fuckill”.

The struggling emigrant is a familiar fixture in the Irish novel, but Maher’s creation is no trope. Jay is flawed, burdened by his failings, but believes that retribution lies in fatherhood to Bonnie, who has developmental issues. He chatters in our ear all the way through the narrative, but Maher also uses an epistolary form to provide insight. Letters home to his mother – a stagy device – still provide some of the funniest moments of the book. They are signed “your right hand man”, a reference to the fact that his mother, who lives in a fug of dementia back in Ireland, believes Jay to be the Son of God. There are explorations of what it means to be Irish in London, especially with the on-off IRA ceasefires of the mid 1990s. Jay craves progressiveness but is happy to be quizzed on his knowledge of Catholic feast days. He plays games with Irish: translating swear words, using it during sex, even telling an irreverent story about WB Yeats, who “had an operation to insert monkey balls into his stomach to make him more attractive to younger wans”.

The book eventually shifts back to Ireland, thanks to the arrival of a tough, “well-built” female friend called the Clappers. Maher is revealing and heartfelt on the mother-son (and father-child) relationship. He also focuses on the urge to amend the past and to reinvent oneself by any means necessary, from geography to drugs.

Eventually we learn the reason for Jay’s panicked departure from Ireland, which is tenuously reconnected to the end of the story. Here the book unravels a little, with a plot-stretching fracas involving the Millennium Dome and New Year’s Eve. Shauna, Jay’s ex-girlfriend, is given too much space in the story. Although we gain insight into Jay’s mind and motivations, the reader is reluctantly moved away from Jay, the drum-beating heart of the book.

Overall, Last Night on Earth thrums with energy; the dialogue is slickly moulded, making music of expletives and colloquialisms, and may owe a debt to the fact that Maher is also a film critic. This is a very funny picaresque, unafraid of its emotional core. Jay deserves a place on the big screen.