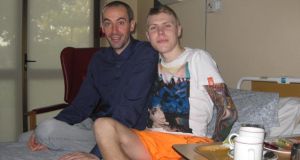 Karl on Graham Parkinson: “I wanted, as a writer, to create something beautiful and lasting in his memory”

In April of 2014, my 21-year-old nephew Graham Parkinson, died from a rare form of cancer, after a long and difficult battle with the disease, starting when he was just 14 years old. He fought it off twice, with the help of various medical interventions and treatments, finally succumbing on the third occurrence. Despite his illness, he was a promising football player, having had a successful career in youth football with Belvedere boys. He was capped for the Irish youth team, going on to sign for Bohemians FC, and there was often talk of English clubs eyeing him for a trial.

I hope we have done justice to Graham’s life, struggle and memory with something that may have a lasting appeal for others affected by the loss of someone young and dear to them

Graham was my sister Elaine’s only child, and he grew up living alongside me in the same flat in O’Devaney Gardens, on Dublin’s northside. With him being an only child, and me having no brothers, we formed a very special bond during his short life. After his death, I wanted, as a writer, to create something beautiful and lasting in his memory, and eventually wrote a long elegiac poem about his fight with cancer, and also my own grief for his passing.

I believe strongly in the higher functions of poetry, among which is the ancient and essential mode of honouring a heroic and tragic death among our loved ones. I was intimately aware of the tradition of the poem of elegy and mourning, especially from one male on the death of another male: Milton’s Lycidas for poor drowned Edward King, Shelley’s Adonais for tubercular John Keats, Whitman’s When Lilacs Last in the Dooryard Bloom’d for Lincoln, Tennyson’s In Memoriam for lost lover Arthur Hallam… these are among the greatest in that tradition, and I read and re-read those and others for inspiration and comfort.

The poem was first broadcast on RTÉ’s Arena arts show, on the first anniversary of Graham’s death, and recently published in my collection Butterflies Of A Bad Summer (Salmon Poetry). But I felt that the best way to honour Graham’s memory was to make a video poem, to take it to a larger audience, particularly those in my own community, the Dublin council estates, and inner-city working class, where to be honest poetry books are not big sellers.

This is the community in which most of Graham’s family and friends live, and many people there raised money for Graham to receive treatment outside of Ireland, last-ditch expensive treatments he could not get here. So I got together with musicians Conor O’Connor, Claus Jensen and Charlotte Hamel from The King Mob, and poet and now video artist Dave Lordan, to make the audio track and video of the poem.

The video draws on new technology and on the history of avant-garde cinema/film, especially modernist experiments of the 1920s and ’30s. It’s a 16-minute long piece in which we tried to push the video-poem tradition at least a small bit in the way of serious artistic expression. We hoped to merge the old poetic tradition of elegy and lament with the new and very exciting medium of indie video art, now open to almost any artist in the western world, at a relatively small expense, compared to what it would have cost 20 years ago. I feel, and hope, that we have done justice to Graham’s life, struggle and memory with something that may have a lasting appeal for others that have been affected by cancer, or any other life-stealing disease, or by the loss of someone young and dear to them.