Kelly Creighton on writing The Bones of It: conflict, masculinity, nature versus nurture

I wanted to write a story about two angry men, one younger and one older, and to understand where that anger is coming from 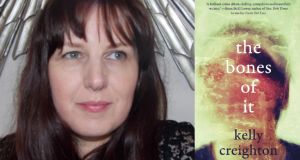 Kelly Creighton: Writing in the voice of a 22-year-old man, continually I ask myself if Scott would really say or think that. I was attracted to that part of the challenge. Who is telling the story is the only thing that matters to me, and why they are telling it to me in that particular way. Voice is everything

In my debut novel, The Bones of It, is a character named Klaudia, who Scott McAuley – the book’s protagonist – thinks will lift him out of his small, lonely life. Klaudia likes to play a game called What Would You Rather? She presses Scott to choose between two options.

When you write a book, people ask: “Which did you start with, character or plot?” Klaudia would be in her element!

This question has forced me to disentangle the end story and rewind back to the beginning: what was I trying to achieve when I started?

Character and plot are as important as each other, in my mind. I really couldn’t choose one over the other. I wanted the characters – especially Scott and his father, Duke – to feel real. The plot, of course, is integral because it’s a crime novel, and you can’t rely on beautiful language to awe the reader. Things have to happen. The reader has to want to turn the page.

I don’t see plot and character as having formed separately at all, for this project. I think they came with the dialogue braided in.

The initial seed for The Bones of It was planted a couple of years ago when I was travelling by train. A young man sat beside me and for a good hour he had a succession of heated telephone conversations. What struck me was that he wanted everyone in his vicinity to know that he was fuming. Then I got off the train and there was an older man yelling at his little boy in the street. From what I could make out, both reactions seemed highly overblown. I knew there had to be something much deeper going on. That day made me think, I want to write a story about two angry men, one younger and one older, and I want to understand where that anger is coming from. I didn’t have characters or a plot, but I had a topic to revisit.

The rest came almost simultaneously. In 2013 I’d won a bursary to attend the John Hewitt International Summer School in Armagh. The theme of the week was Living Among Strangers: the lost meaning of home, the programme chockfull of literary readings and political talks. It was a talk on the Northern Ireland Peace Monitoring Report that stood out for me. The statistics about children of the Troubles – people my age – were stark.

I wrote down the phrase, swept up by terrorism. It had me thinking about the way young people get into trouble nowadays, the different influences and if it’s any easier being a young man now than it was during the Troubles. I pictured a father and son living on two different planets.

For Scott, he was born on the periphery of peace, raised by his grandmother Isla in a scenic seaside town in Co Down. At the age of 21, he is forced to live with Duke, a counsellor and ex-paramilitary. Scott is sickened by his father’s narrow-mindedness, and Duke in turn can’t understand his son’s clean-living existence.

I spent the summer school week developing these two key characters in the playwriting workshops I was attending. At that stage I was thinking of the story in terms of a play. I could visualise the scenes. When I spoke to a dramaturg – about another piece of work – I realised that plays are time-consuming. With a young family it doesn’t suit me right now. So I had to rethink how I saw the story; all the while the characters were having a dialogue inside my head and I was making notes.

Writing in the voice of a 22-year-old man, I have had to analyse every sentence, and continually I ask myself if Scott would really say or think that. I was attracted to that part of the challenge. Who is telling the story is the only thing that matters to me, and why they are telling it to me in that particular way. Voice is everything.

After the summer school came three months of sitting on the story, wondering which angle to come at it from, I knew there was more to it than a short story. Then Nanowrimo (National Novel Writing Month) came around in November. Impulsively I went for it and got the first draft down in less than three weeks. Ultimately there was another year of work to go into the novel, between short stories and poems – and starting up The Incubator, a literary journal that concentrates on the short story – and then there it was.

The themes of The Bones of It are: conflict, masculinity and nature versus nurture. Now it’s how I always work. Whether it’s a novel or a short story, there will be the refrain of an idea that I’ll keep coming back to, even if just to stop myself veering. Any story I’ve ever tried to write that didn’t mean something important to me, has never worked. I’m definitely a planner when it comes to telling stories.