Karin Altenberg: ‘landscape in my novels is not just backdrop - it is both stage and actor’

The Orange Prize-longlisted author and landscape archaeologist, whose novels are set on Dartmoor and St Kilda, explains why setting is so significant for her 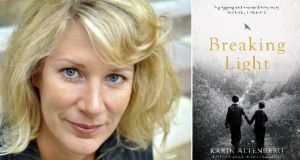 Karin Altenberg: “I believe that the actual setting a writer chooses for a narrative is related to where your sensibilities lie. I have been tuned to – and have closely observed – the outdoors since I was a child. Other writers may be more aware of architecture, interiors or urban landscapes”

The setting of a novel is just as important to me as the plot. Place is an existential concept, closely linked with our being in the world. We experience our identity as meaningful through a place and a community to which we feel that we belong: a kind of arch-home that we can forever escape from and return to. And we are all, to some extent, socialised by moving through landscapes while naming the places that are known to us – this is how we become, through a cartography of language and place. And this is to a large extent what art is trying to do – sorting out and mapping a place of existence.

I believe that the actual setting a writer chooses for a narrative is related to where your sensibilities lie. I have been tuned to – and have closely observed – the outdoors since I was a child. Other writers may be more aware of architecture, interiors or urban landscapes. I also like looking back and feel that the landscape of the past is both terrifyingly real and utterly otherworldly – a wonderful fiction.

I was never a student of literature or creative writing but always a voracious reader – of poetry and fiction mainly, but really of anything I could lay my hands on. As a landscape archaeologist I was reading the layers of meaning in the historic landscape like I would read a book. It was this second kind of reading, I believe, that led me to writing fiction. So I suppose I could say that my novels were born out of the landscape – not necessarily the landscapes in which they are set but out of my understanding of landscape.

Fiction is not reportage but an act of the imagination; it is drawn from memory and deep concentration, digested, in my case, alone and indoors. I spent time on Dartmoor and the island of St Kilda, the landscapes where my two novels are set, before I wrote a word of fiction, but I didn’t feel the need to revisit them while I was writing. The strange, evocative nature of the actual places and their historical significance had lodged in my mind and were crucial to the purpose of my narrative. This also applies to the creation of characters, when novelists harvest traits from people they know or have only met fleetingly. These observations are stored with all the others, before eventually emerging on the page as fully-formed, wholly fictional characters. Only at this point can the characters start to be useful to me as they move through the world, and help me to describe it as it really is – the reality as I see it.

In my novel Island of Wings, set in the archipelago of St Kilda in the Outer Hebrides, the islands themselves provoke a clash of opposites. The St Kildans, who had made the main island of Hirta their home for generations, had found a way to live by its seasons and weathers. The resident minister, Neil MacKenzie, however, feels a need to challenge the place and its remoteness, which, in MacKenzie’s view, symbolise moral collapse and uncivilised depravity. The island, being located far out in the Atlantic (but in the middle of this conflict) has its own weather system that seems to increase in turbulence as MacKenzie’s mind weakens.

I sailed to St Kilda from Harris, and this approach, under sail from the sea, was very important for the birth of the novel. The novel is based on historical events and people and for that reason it was necessary for me to experience the archipelago at first hand. But many descriptive aspects in the book are taken from other places, particularly islands that I have visited over the years, and especially from one off the west coast of Sweden where I spent my summers growing up. The smells and the qualities of light in Island of Wings are probably derived from this island in the North Sea where I first started to explore the world as a child.

Over 15 years ago I spent long periods on Dartmoor carrying out archaeological fieldwork for my PhD research. I was looking for evidence of how medieval settlers perceived the prehistoric settlements and monuments on the moor – how they avoided or embraced the remains of a past that would have been as much a mystery to them as they are to us.

Sometimes, when walking alone across the heather and bracken, surrounded by the coconut smell of gorse, the ancient world seemed suddenly close, as if the here-and-now was as much part of that past as the myths and legends surrounding those stone circles, menhirs, tors and rivers. This is the landscape that I returned to in my memory when writing my second novel, Breaking Light – although, as a purely fictional narrative with a fairly universal theme, I suppose it could have been set anywhere.

I knew that I wanted to set my story in a small, conventional community where foreign elements are treated with caution and even frowned upon; where uncomfortable truths may be swept under the carpet. The fictional village of Mortford is a kind of pastiche of a Dartmoor village. The villages around the moors often reminded me of harbour towns – coming off the moor on a stormy day felt very much like sailing into port. This aspect of shelter was important when I created Mortford – both in the sense of it being insular and in the sense of a potential haven. I found that I could contrast it with the concept of the moors as an unclaimed, outlying landscape where bad things may happen.

But it is also a landscape of exploration, wonder and escape. There is a passage in my novel when the boy Gabriel leaves home and comes of age – a section loosely based on English folklore. I wanted to capture that otherworldliness which you can experience as a teenager when striking out on your own for the first time. The kind of Technicolor ecstasy of meetings on an inter-rail trip, for example, or that youthful sense of invincibility when you take risks that you certainly wouldn’t take as an adult.

Landscape to me, then, is more than just the backdrop and location of my novels; it is both the stage and the actor.

Breaking Light by Karin Altenberg is out this month (Quercus £8.99)