‘Just five more minutes …’: the joy of writing for children

I’ve written for teenagers before, and for younger children, but this new series has been my most personal experience of writing for the child I once was 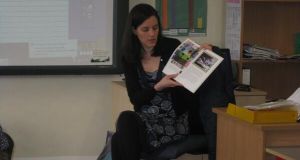 Natasha Mac a ’Bháird: passing on the torch for a new generation of readers to read under the blankets

There’s something magical about writing for 9-12-year-olds. I have loved books all my life, but it was at this age that I remember most clearly the overwhelming compulsion to keep reading, to find out what happens next, just one more chapter, just five more minutes. It’s the age when you first discover the joys of reading by torchlight under your duvet, the rest of the house quiet, hoping you won’t be caught before your hero escapes from the bad guys.

I used to read everywhere and anywhere. I remember being sent to brush my teeth and propping the book up behind the taps so I could keep reading. Getting caught with a novel under my desk in school because I was bored by the class and just had to find out what happened next.

Curled up in an armchair on a rainy day, oblivious to my sister’s pleas to come and play with her, because I wasn’t there at all. I was in a dungeon with the Famous Five, I was planning a midnight feast at St Clare’s, I was fleeing from the Nazis with the Chalet School girls, I was waiting in the wings with Pauline, Petrova and Posy, ready to go onstage. I was creeping down the stairs with Tom, hoping and praying that the midnight garden would still be there, I was roaming the prairies with Laura Ingalls, walking by the Lake of Shining Waters with Anne of Green Gables, I was sitting in Claudia’s bedroom eating junk food with the Babysitters Club.

I’ve written for teenagers before, and for younger children, but there’s no denying that this new series has been my most personal experience of writing for the child I once was. The Star Club books are about four girls with ambitions to be on the stage bringing their different talents together to put on shows. Creating characters, making up storylines and dressing up – memories of doing just the same thing with my sister and brothers came flooding back to me as I thought up escapades for Star Club.

At that age I already knew I wanted to be a writer, but I also harboured dreams of being on stage, so writing about four girls with similar aspirations gave me the chance to explore those feelings once again. Remembering how I devoured Noel Streatfeild’s books, wishing I could go to a fancy London theatre school like the Fossil sisters in Ballet Shoes or be an ice skater like Harriet and Lalla in White Boots, kept the inspiration coming.

But I can’t just write for myself, and I’m conscious when I’m writing of what will make young readers want to read on. It helps that my daughters are just the right age for Star Club, and that they have loved it from the first time I showed them a few early chapters. Knowing your editor is expecting your rewrites by the agreed deadline is one kind of pressure. Having two 11-year-olds pestering you for the next chapter is quite another.

For them, having immediate access to what I’ve written is a strange mixture of fun and torture. Fun because they get to read the stories before any of their friends and even to influence me on what happens next. Torture because they always have to wait for the next chapter, and me saying I can’t write any more because I have to make the dinner or because I’m all out of inspiration are regarded as equally pathetic excuses. But however much it adds to the pressure, knowing they are just dying to read the next bit gives my heart a lift.

Sending your new book out into the wild is a daunting prospect, because you just never know how this piece of writing which you have poured your heart and soul into is going to be received. Since the first Star Club book, Hannah in the Spotlight, was published, and now with the second one, Starring Meg, I’ve had some lovely reviews from adult readers, which is both an encouragement and a relief. But the best review of all is hearing that children couldn’t put it down.

“I caught her reading hours after I’d turned out her light,” one mother told me. “She never wants to read on her own, but she can’t put down your book,” said another. “I could never get her interested in fiction, but when I gave her your book she wouldn’t stop reading, and when she finished it she told me she was going to be so lonely without it,” another told me.

And that, for me, is what it’s all about.