Iron Gustav: Could this be one of the finest novels any of us will ever read? 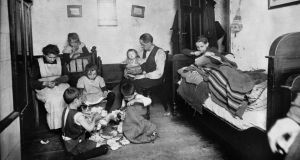 Iron Gustav is the story of one man, but it is also a vivid, atmospheric portrait of Berlin, showing how the war affected its citizens. Photograph: Roger Viollet/Getty Images

Gustav Hackendahl, former soldier and now employer, is a domestic tyrant. He runs his home in much the same way as he directs the daily routine in his successful Berlin cab business. His wife meekly obeys his every order, although she does sneak occasional cups of expensive, and forbidden, coffee, while the grown children have become increasingly resentful.

Hackendahl is known as a tough character, hence his Iron Gustav nickname. He doesn’t mind: he enjoys it. It’s the only way he has known. His home is his barracks. But everything is about to change: the children are ready to rebel, and on a wider scale the Great War is poised to destroy the old order, in an upheaval that will include Gustav’s personal empire.

Originally published in Germany in 1938, in a heavily censored version tailored to meet Nazi whims, this new “complete” edition consists of the 1940 English translation by Philip Owens, who was killed while serving in the intelligence corps in 1945. That first English edition cut about 200 pages from Fallada’s original. Those passages have been restored. It is an impressive act of retrieval.

Beyond that, there is a serious cause for celebration: one of the finest German-language works of the 20th century is now available as it was intended to be read. Yet again the achievement of Hans Fallada, born Rudolf Ditzen (1893-1947), a troubled man and a tremendous writer – one who never left Germany – must be acknowledged.

Fallada admired Charles Dickens, and throughout his fiction, particularly in the character-driven Iron Gustav – here subtitled A Berlin Family Chronicle – it is fascinating to see the ways in which the German responded to the art of the singular Victorian who broke all the rules.

Fallada, with his fellowship with Thomas Mann and Joseph Roth, shares Dickens’s humanity, realism and social conscience, yet there is no sentimentality and far less dependence on coincidence. His vision is sharper. In the domineering Gustav, Fallada has created a hard-headed and convincing, at times naive, character who never loses our sympathy. As a father he is both suspicious and bewildered by his children; his favourites – a daughter, Eva, and his middle son, Erich – both fail him and themselves, one through stupidity, the other through inherent nastiness.

Sophie, the child most like Gustav, determinedly pursues a career in nursing. Ironically, her ambition is assisted by her ruthlessness, while Gustav’s eldest son, Otto, the one who bore the brunt of his iron disciple, is a weak, artistic man, driven to hiding the fact that he has fathered a child.

Then there is Heinz, the youngest, initially carefree and quick to use his snatches of Latin. The novel’s heart, Heinz emerges as an inspired foil to both his father’s strengths and his father’s weaknesses.

The novel is the story of one man, but it is also a vivid, atmospheric portrait of Berlin, showing how the war affected its citizens, the damage done by food shortages and defeat, as well as the political and social chaos of the Weimar years, including the paranoia that followed. Iron Gustav is an Otto Dix painting come to life, while the music of Kurt Weill provides the soundtrack – not that Fallada much liked music.

Fallada’s literary genius rests not only in how he can sustain a multithreaded narrative but in how he, apparently effortlessly, develops characters through chronicling their actions. He understood human desperation. Admittedly, Iron Gustav was intended as a film script, yet, even without this, Fallada always eases his narratives through episodic scene shifts, moving from character to character.

Eva’s rebellion begins with a chance encounter that involves her in theft and binds her to a madman, although she has already been stealing from her mother. Erich’s corruption is far more complex and, initially, politically motivated. He ultimately becomes a fallen angel, devoid of pity or remorse.

Fallada could certainly tell a story, but his defining gift is characterisation, enhanced by an astute ear for dialogue, often colloquial. Throughout the novel, speech is fast and furious; some of the exchanges are hilarious, particularly when heated or, even better, as a conversation settles into a laconic battle of wits. Even the most casual remark plays a part in developing a character, driving the action.

After Gustav has lost his fortune, his unpleasant daughter Sophie remarks when meeting him after a long absence: “I haven’t been in Berlin for a long time . . . and perhaps I may be mistaken – but you used not to speak in such a . . . local way, did you father?”

Most of all, though, the book triumphs as a study of ordinary Berliners faced with dire adversity; Fallada celebrates them repeatedly, their wariness, their humour, their toughness, their blunt kindness and, above all, their conversation.

Few novels approaching 600 pages unfold with such pace. But then change is one of the major themes. Early in the narrative Fallada introduces rumours of the coming war. Gentle Otto, exasperated by life under Gustav’s regime, blurts out to his beloved – and secret – Tutti, a crippled seamstress and the mother of his child: “But if we have a war and I have to go to the Front, then I’ll pray that I lose an arm or a leg so that I needn’t work any more in his accursed stable, never out of his sight; so that I can go elsewhere, never see him, forget him.”

One of the many set pieces features Gustav, puffed up with pride, setting off to sell his fine carriage horses to the war effort. He walks away after the purchase is completed, and notices a soldier pulling too tightly on the reins of a horse with a sensitive mouth. It alarms Gustav, and he instructs his son to intervene. Fallada then adds a telling aside: “But it didn’t make any difference. They weren’t his horses anymore. They belonged to the Fatherland.”

Eva, down on her luck, dreams of pretty clothes and dancing, but she is working in a munitions factory. She wants to sleep and makes a mistake operating a machine. It causes an accident. Erich’s criminal career is an account of German history between the World Wars.

The members of the family make their ways through the mire. Old Gustav loses his carefully cultivated airs along with his fortune as his cynicism gradually supplants his disillusionment.

One of the most moving exchanges in this compelling masterwork is when young Heinz, older, wiser, sadly familiar with humiliation, visits his old classics master. The professor, who has been injured in a nasty dispute over which German flag to display, speaks to his former student: “When you get old, you begin to ask yourself: why have you actually lived? What have you achieved?”

It is a solemn, profound moment in a novel that lives and breathes and questions. Gustav, the oldest cabman in Berlin, decides to set out for Paris in a symbolic act of resilience that wins him short-lived fame and also reveals his magnificent simplicity.

An insightful introduction by Jenny Williams, author of More Lives Than One (1998, 2012), a superb biography of Fallada, examines the background to the publication of Iron Gustav. Reviews can only say so much.

This remarkable work, now complete after 76 years, could well be one of the finest novels any of us will ever read. Hans Fallada really was that most rare creature, a born novelist who was also a witness.

Fintan O’Toole on Tim Robinson: ‘One of the greatest writers of lands’
3

Bravo! The winners of the 23rd Irish Times Irish Theatre Awards are here
5