Irexit: how Parnell’s anti-imperialism sowed seeds for a clean break with Britain

In an uncanny foreshadowing of Brexit, Irish Home Rulers turned against a local elite and a distant capital, siding with Afghans, Zulus and Boers against empire-builders 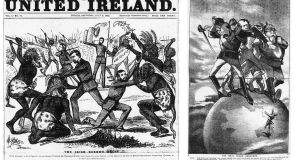 Empire building was associated at every turn with brutal or farcical themes – as a faux-patriotic, flag-waving pageant, and above all as a tragedy replete with bloody slaughter, thievery and massacre 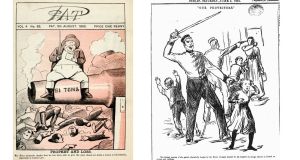 In the turbulent Irish nationalist press of the 1870s, British imperialism was routinely lampooned

Consider for a minute, this scenario.

A small constituent part of a grand political experiment in globalisation chafes at continued participation in the enterprise. Boisterous and irreverent populist voices reject continued support for what they condemn as an arrogant and self-serving project of political elites in a capital city many hundreds of miles away. They object to the ongoing neglect of local issues and priorities, and worry about the erosion of cultural identity. They reject what they characterise as condescending and alien perceptions of their best economic and political interests. They (surprisingly) reject most of their own political leadership at the ballot box when it urges co-operation and collaboration for the sake of long-term economic self-interest, and encourages them to be satisfied with patient reform efforts.

In vain does that leadership chide them for misunderstanding the trajectory of politics and history, and in vain do many insist that asserting political independence is foolish and short-sighted in an era of increasing globalisation, interdependence, and waning importance of local identities and borders. Instead, they vote for radical, unproven, largely unknown nationalistic leaders who, many warn, traffic in bitterness, half-truths and the exploitation of ancient animosities, handing over the best interests of the people, many worry, to unprepared Pied-pipers.

The dynamics of “Brexit” in 2016? Perhaps, but I am also describing how my book The Road To Home Rule portrays the “takeover” of the Irish Home Rule movement by Charles Stewart Parnell and his activist allies in the late 1870s.

Prior to Parnell, the movement was in the hands of Isaac Butt, a genial sort of political reformer (a contemporary Irish critic noted that he was a man “with almost every weakness”) who built the movement around cautious appeals to elite British political opinion and the earnest promise that a Home Rule Ireland would become the ideal collaborative partner for a rapidly expanding British Empire. The nineteenth-century empire, Butt argued, offered a bigger and better framework than the Anglo-Irish Union for equal trading rights for Irish merchants and manufacturers, while continued Irish participation in the imperial system opened doors for migrants, merchants, civil servants and entrepreneurs. Butt’s Home Rule campaign therefore acknowledged the “practical benefits” of the powerfully attractive notion of imperial partnership and of a genuinely shared imperial culture, with Ireland sharing in the co-management of the world’s greatest empire.

Parnell and his “obstructionist” allies dexterously turned these ideas on their heads, rejecting parliamentary decorum in part by undermining important imperial legislation, including supply bills related to imperial military action.

Radical Home Rule MPs argued that acceptance of British imperial activity by Irish politicians who should know better constituted an acid test of West Britonism. The Parnellites made headlines (and gained popular support) by opposing, in a flood of colourful and dramatic language, a series of imperial wars – first in Afghanistan (1877-78), and then in Zululand (1879), South Africa (1881), Egypt (1882) and the Sudan (1884-85).

As one of Parnell’s allies put it, in relation to the ongoing Afghan campaign in 1878, that effort was “odious to the Irish people”. The invasion and Irish union, both characterised by “corruption and violence”, had “the same object in view – English aggrandisement”. Both endeavours marched “to the same dishonoured victory over the bodies of brave patriots fallen in defence of their native land”. “As an integral portion of the empire”, it was a “first duty” of Irish people to repudiate from “heart and soul this blood-stained imperialism”. Parnell himself contemptuously denounced the Zulu war as a “holocaust of that imperialism which had lately become so much the fashion”.

This anti-imperial turn in Irish nationalism coincided with the rapid expansion of the Land League and the great Land War of 1879-1882. Parnell and his active allies in the press and British parliament, men like the Fenian and pioneering journalist JJ O’Kelly, AM Sullivan (the editor of the Nation) and William O’Brien (eventually the editor of the Irish party’s official organ, United Ireland) exploited imperial crises, seeing clear political advantage in presenting themselves as a stark alternative to Butt – opponents of empire-building, colonial wars, and existing imperial political arrangements.

They pointed to the Irish past in condemning the imperial present, and promised that Home Rule would end Irish complicity in aggressive imperial action. Parnell and his allies were variously motivated, but a rising tide of “jingo” imperial enthusiasm (the term was coined in the 1870s) did not translate well across the Irish Sea. O’Kelly was an ideological opponent of imperial structures and a committed democrat; O’Sullivan was inspired by religious and moral concerns about the treatment of subject races; O’Brien knew propagandistic gold when he saw it; while Parnell himself seems to have been largely driven by a genuine desire to stick a thumb in the eye of British ambition as well as by a keenly opportunistic sense of Irish public opinion.

Other influential Parnellites had more eclectic motivations – Justin McCarthy dreamed of imperial federation, but on Irish terms, a cascading flow of Home Rule inspired political reform that would usher in a free commonwealth of independent states loosely directed from London and Dublin. TP O’Connor quite simply hated Benjamin Disraeli, the Tory prime minister, and sought above all to confound his jingoistic ambitions.

From all of these vantage points, a new breed of nationalists condemned at every turn the imperial undertakings of both British parties, rejected whatever premises and justifications were offered for them, mocked imperial triumphs, and celebrated disastrous imperial failures like the fiasco of the invasion of Zululand. Indeed, in the bumptious and turbulent nationalist press of the day, imperialism was routinely lampooned. In editorials and images, empire building was associated at every turn with brutal or farcical themes – as a faux-patriotic, flag-waving pageant, and above all as a tragedy replete with bloody slaughter, thievery and massacre – all conducted under the great lie of spreading “civilisation” and “religion”.

These successful efforts horrified, but then marginalised moderate Irish leaders who condemned them as impolitic, short-sighted and demagogic. Mitchell Henry, an MP and a longtime supporter of Butt and Home Rule, lamented the rise of Parnell in the late 1870s. “Moderation and common sense,” he complained in a letter to a constituent, “are killed the moment that such men…assume such prominence.”

The O’Conor Don, another MP and Buttite, expressed similar sentiments in more frustrated terms. In a public letter from 1877, he lamented Parnell’s absurd “reckless ardour” for “imperial questions” and condemned his “irrepressible desire to save the people of some distant lands from the incompetency of her majesty’s government”, mocking “a philanthropy that knows no distinction of colour, or feature”. “I voted against this,” he despaired, “and I am, therefore, to lose my seat for Tralee, and be scowled at by the farmers of Kerry.” He did, indeed, lose his parliamentary seat in the election of 1880.

What difference did this political choice make? An interesting question my book explores, but I would argue that for Irish nationalists of that and later generations, it linked the cause of Irish patriotism in the minds of many in the country with the explicit rejection of imperialism.

Anti-imperialism, although not new, had not been nearly as integral to Irish nationalism of earlier eras, and in subsequent years many advocates, even those who wanted to re-associate the cause of Home Rule with the preservation of empire, such as John Redmond in 1914, found the linkage an awkward political liability that could not be jettisoned.

In an age of rising imperial enthusiasm, moreover, the association hamstrung those many politicians, Irish and British, who sought compromise, and mutual commitment to the evolution of a British polity that could include a semi-autonomous Ireland in the way it for a time included a semi-autonomous Canada or Australia. In the decades since independence, the Irish relationship to imperialism and neo-imperialism has remained complex, but the deep roots of both anti-imperialism and contrary-mindedness in Irish nationalism are worth remembering.

Paul Townend is Undergraduate Dean and a Professor of British and Irish History at UNC-Wilmington in North Carolina. His previous work includes a study of Father Mathew’s temperance society; this latest book, The Road To Home Rule: Anti-Imperialism and the Irish National Movement, is new from the University of Wisconsin Press’s History of Ireland and the Irish Diaspora series, co-edited by James S. Donnelly Jr. and Thomas Archdeacon. It will be reviewed in The Irish Times on December 3rd