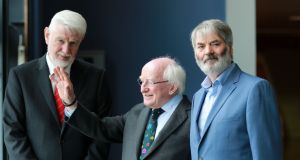 At the beginning of his impressive account of how Ireland and three other small open economies – Denmark, Finland and the Netherlands – negotiated and managed the process of Europeanisation since 1987, David Begg outlines how he gathered his evidence. He notes that by focusing on elites, there is a danger of “groupthink”.

As general secretary of the Irish Council of Trade Unions from 2001 to 2015, Begg might be considered the ultimate insider. He has also served on the boards of Aer Lingus, the Central Bank and the National Economic and Social Council, and was a governor of the Irish Times Trust. So Begg has been accused of suffering from and contributing to the “groupthink” that many blame for contributing to the Irish economic collapse.

This book is not a defence of Begg’s insider status (although he does offer one for the role of the Central Bank during the crash), but rather an attempt to explore tensions between free markets and social protection in these four small economies and assess how they managed that dichotomous relationship.

At its heart, the book seeks to explain how Ireland’s process of political economy has gone since 2008 and to offer solutions as to how public policy could be made better. To do this, Begg wisely engages in a comparative study of how different coping strategies have been used on the road to the nirvana of a prosperous and progressive social democracy.

Begg firmly places his study in the tradition of Karl Polyani and Ulrich Beck, who explored the concept of economic embeddedness 70s years apart, Polyani in 1944 and Beck in 2013. For both thinkers, the dismal science of economics could not in and of itself explain economic crises or how economies even worked.

No economy is autonomous and thus the dimensions of society, politics, religion and social relations must all be rigorously interrogated in any assessment of how the economy works. Begg, in trying to chart a way forward for Ireland’s policymakers, situates himself firmly in this tradition.

For each of his four case studies, Begg makes use of his insider status and what he describes as “networks in academia, politics, public administration and trade unions” to gain insights from policymakers. He takes readers carefully through the move from trading bloc to monetary union, and how policymakers in Ireland, Denmark, Finland and the Netherlands have reacted to the ongoing economic crisis.

Begg’s interview material certainly enriches his study, though at times he doesn’t interrogate his subjects enough. He makes much of an interview with John Bruton, who bemoans the intellectual failure at the heart of the European project itself and, more specifically, Ireland’s place in it, a failure to “grasp what the whole thing was about”.

For the former taoiseach and EU ambassador to the US, this manifested itself in a failure to explore options, even if to reject them, on the path to making policy choices.

Yet Bruton and Begg are curiously silent on why Bruton (and indeed others in Fine Gael and, for that matter, Fianna Fáil) didn’t challenge this intellectual failure that he blames for much of the calamity that inflicted Ireland and Europe, nor what the alternative ideas were.

Begg makes clear that the whole social partnership process in Ireland was pragmatic in nature and orientation. He is also surely right that the Irish version was not rooted in Peter Katzenstein’s “ideology of social partnership”, whereby in Denmark, Finland and the Netherlands it is now seen “as the first refuge in a crisis and is firmly embedded in the intuitional architecture of each country”. By contrast, he writes of how social partnership in Ireland had collapsed by 2009, unable able to survive a five-part crisis: economic, social, banking, fiscal and reputational.

Begg is not shy about wearing his social-partnership colours on his sleeve. Arguing that Europe needs to embark upon an even more ambitious phase of integration and institution-building to complete a monetary union and resolve the current crisis, he asserts that “just when it was most needed, Ireland set about dismantling its much vaunted Social Partnership model”. He also notes that “in time Ireland will have to fully rehabilitate social partnership”.

These viewpoints won’t be universally popular. Still, they are certainly plausible if, as Begg says, it is the function of social partnership to deal with distributional questions so that governments can get on with the task of growing the economy.

Ultimately, Begg, in this valuable and timely study, offers a trenchant defence for trade unions across Europe as agents of change in rescuing the continent from the “Hayekian nightmare into which it has fallen”. At a time of decreasing trade union influence on the European project, and doubts about the project itself, this might be wishful thinking.

Still, it is to Begg’s credit that he has made a cogent case. Persuading voters might be more difficult.

Gary Murphy is professor of politics at Dublin City University. His latest book, Electoral Competition in Ireland Since 1987: The Politics of Triumph and Despair, has just been published by Manchester University Press