This innovative book weaves literature, poetry and historical observations together 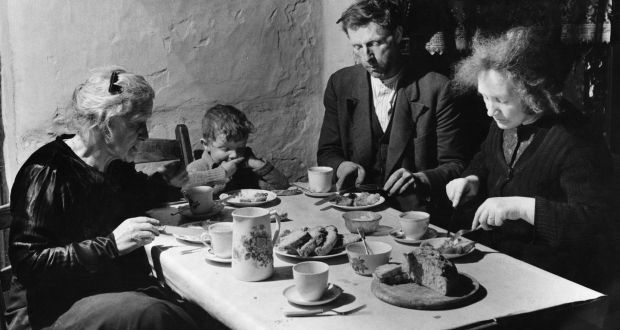 Ireland, wrote the Venerable Bede in the 8th century, “far surpasses Britain… The island abounds in milk and honey; nor is there any want of vines, fish, and fowl”. Not everyone has always shared Bede’s enthusiasm about Irish food; indeed we are often anxious that our fare pales in comparison to the great food traditions of our continental cousins.

Margaret Hickey’s beautifully written new crowdfunded book on Irish food gives the lie to such insecurity. Skilfully weaving divergent threads from literature, poetry, and historical observations into a “great tapestry of Irish food history”, Hickey shows that our “green and life-giving larder” is worth celebrating.

The backbone of Irish food for millennia has been cattle, animals that, as former director of the National Museum AT Lucas wrote, “touched the lives of everyone from sunrise to sunset and from birth to death”. It is their “white-meats”, not the red, that have been prized most: Elizabethan traveller Fynes Moryson wrote that the Irish regarded “milk like nectar”; Jacobite John Stevens that we were “the greatest lovers of milk I ever saw”.

Hickey’s recipe for buttermilk curds (one of many useful recipes throughout the book) reminds us of sour staples prized by ancient warriors and medieval monks who dreamed of “sleek pillars of cheese” and “fine beams of yellow cream”. One golden strand shines most brightly: “it is almost impossible”, Hickey writes, “to overstate the central significance of butter as we trace the history of food in Ireland”.

At times that history is a little too static. As Leslie Clarkson and Margaret Crawford chart in their 2005 Feast and Famine: A History of Food and Nutrition in Ireland, 1500-1920, the early modern period, the century before the famine, and the decades after it all saw radical transformations in Irish food and social history; a “way of life that had changed little since the Middle Ages”. Nor during centuries of British rule did “little from the wider world” touch Ireland: throughout all of that change the island was integrated into the European, Atlantic, and imperial worlds. Food is always at the heart of wider history.

Hickey, however, accesses the vital in the history of food, bringing the meals and traditions of ordinary people to life with her great breadth of knowledge. There are barley loaves, “goaty breads”, cakes of oats, and even “barm Barack” from Moneygall. Eggs – “pearls of the household” – were everywhere, with poultry a fixture on every farm and table. On her 1930s tour of Ireland the food historian Dorothy Hartley loved the sort of breakfast where one !replenished the teapot twice and politely lost count of eggs”.

Alongside eggs come cured meats, and Irish butchery was traditionally about using and preserving everything from nose to tail. Rich and poor alike shared the tastes of Leopold Bloom in James Joyce’s Ulysses, who “ate with relish the inner organs of beasts and fowls”. Offal, mutton and other meats unfashionable today were long commonplace: Hickey surveys stewed sheep’s heads (Brendan Behan recalled the eyeballs staring out from the pot); Dingle mutton pies; crubeens; drisheen; tripe and onions; spiced and corned beef. The industrial nature of modern meat production should make us reflect on the ethics of our newfound pickiness.

Our “coldest shoulder”, Hickey laments, is reserved for fish and shellfish. “The waters off the west coast of Ireland are home to some of the finest seafood in the world,” she notes, “yet most of the catch is sent crated up for export”. Herring, ling, mackerel, carp, even Molly Malone’s cockles and mussels are rarely desired in Ireland (outside of our immigrant communities), and we have lost our ancient love of seaweed. Hickey passionately evangelises for a more catholic embrace of seafood, while wisely warning of the dangers of industrial aquaculture and over-fishing.

The waters with which we have traditionally been more comfortable are of the alcoholic variety, as Hickey writes: “the Irish love of drink is undeniable”. Centuries of celebrations have been full of beer, mead, and whiskey (Queen Elizabeth I allegedly called it “her only true Irish friend”), while medieval bards recounted going from “one feast of purple wine to another”. Strong tea – “when I makes tea I makes tea”, intones Buck Mulligan in Ulysses – became popular in the 19th century, and it too has become central to our socialising. We are among the biggest tea-drinkers in the world.

Hickey shows that refreshment could come from native plants as well; the medieval poet Suibne Geilt wrote that Irish watercress was like “a drink of cold water from a pure stream”. Travellers noted other “curious salads” too of nettles, wood sorrel, wild garlic. Cabbage was omnipresent – “no wonder they took to whiskey”, sighed Jane Grigson after a week of cabbage in Donegal – but few would disagree with John B Keane that the smell of it boiling with bacon “would tear the heart out of a hungry man”.

In modern times our plant-eating became conservative, but Hickey is delighted that the Moore Street market where she shopped as a student in the 1960s is now a microcosm of Ireland’s “widening horizons”, full of aubergines and avocados. The fate of our native plants is less happy, with an alarming decline in the diversity of everything from root vegetables to apples: “much has been lost, and lost recently”, Hickey warns, detailing the vital work of the Irish Seed Savers’ Association to safeguard our heritage varieties.

One plant above all looms largest. The potato revolutionised life in Ireland, enabling an enormous expansion in population before its failure precipitated the catastrophic Great Famine. The scars on demography and development have been long-lasting, and Hickey believes famine scarred our food culture too. But our love of the potato has remained undimmed, be it boiled and tossed in the sciathóg, “beetled” as champ or colcannon, shaped into boxty on the griddle or boxty in the pan.

Hickey’s fascinating book shows that the history of our food is not just an antiquarian curiosity, but a window on the wider history of Ireland itself, “a story of what grows on her soil, the creatures that live on her hills and in her waters and the work of human hands, passing life on to the next generation”. In exploring that story, Hickey has produced an innovative book of great interest.