In the Lion’s Den: Daniel Macdonald, Ireland and Empire, by Niamh O’Sullivan review 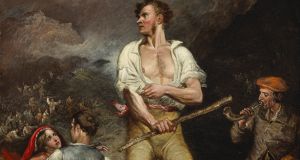 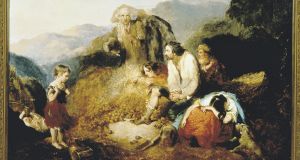 Book Title:
In the Lion’s Den:Daniel Macdonald, Ireland, and Empire

In terms of raw talent Daniel Macdonald deserves to be remembered as one of the best and most ecumenical members of the well-known 19th- century Cork school of artists. Lacking any formal training, he used his natural gifts with brush and pen to depict the realities as well as the emotions of respectable peasants and the landscapes they inhabited in south-west Ireland during the famine era. Resisting the temptation to become a fashionable portrait painter in London like his friend Daniel Maclise, he travelled through the mountainous terrain of west Cork in search of country people who were not only “racy of the soil” but also devout believers in fairies, ancient myths and superstitions. A close rival to Frederick Burton in artistic skill and devotion to the culture and society of the far west, he captured the vitality of the peasantry.

As Niamh O’Sullivan makes clear in her sterling study, In the Lion’s Den: Daniel Macdonald, Ireland and Empire, this gifted artist, who died aged only 32, enjoyed the advantages of an elite background and a brilliant father – James McDaniel – whose intellectual energy and curiosity about the mysteries of science made him one of the liveliest members of the Cork Literary and Scientific Society (founded in 1820). Chief among these luminaries,who fancied themselves the Irish equivalents of Birmingham’s much more famous Lunar Society, were William Maginn, Richard Dowden and Thomas Crofton Croker. The founding of the Cork Art Union in 1841, moreover, marked an important vehicle for aspiring and established artists, although it did not prevent some of them from emigrating to London in search of wealthier clients.

Inspired in part by the distinguished antiquarians and Celtic revivalists George Petrie and Croker, Macdonald painted several sublime scenes that conveyed the superstitious nature of the populace, for example Sidhe Gaoithe/The Fairy Blast (1842) wherein a dozen or so people flee down a mountain road pursued by “some sinister force”.

Like other painters of the famine era, Macdonald avoided depicting the realities of starved and diseased bodies thronging the rural roads and town squares in Munster and Connacht. Any such grim images would have repelled prospective buyers on either side of the Irish Sea. Instead he “book-ended” this national disaster by means of before-and-after images of the effects of the potato blight. In An Irish Peasant Family Discovering the Blight of their Store (1847) a three-generation family despairs over the loss of their staple food supply. And in the equally poignant but more action-filled Eviction (c.1850) a healthy-looking family has been driven out of its stone cottage. After tossing all the contents outside, the bailiffs have barricaded the door to prevent re-entry. To underscore the absence of resistance, the handsome farmer is depicted handing the door-key to the stern and unmoved agent. The tens of thousands of evictions during this time were bound to intensify “the rabid fury” of anyone who witnessed or heard about these heartrending scenes.

The great strengths of this lavishly illustrated volume are the emphasis on historical context and artistic detail. First and foremost, O’Sullivan provides both the background and foreground of Macdonald’s major productions. And second, her sharp eye for detail in each painting illuminates both content and meaning. The highlight of this work is undoubtedly the stunning portrait of the faction-fighting leader in The Fighter (1844). Striking a Putin-like pose with his almost bare chest, he rallies his men for the coming battle with stick or shillelagh in hand. Clearly enamoured of this macho figure, O’Sullivan devotes more than a dozen pages of text plus three full-page reproductions to this icon of Hibernian virility. In fact the close-up of The Fighter on page 63 could almost serve as a centre-fold. (One wonders if the artist used a model for this plebeian Hercules – such as Erskine Nicol’s faithful manservant – or simply unbuttoned his shirt and looked into a large mirror.) Reminiscent of Maclise’s celebrated picture The Installation of Captain Rock (1834), this painting possesses what O’Sullivan calls “a confrontational force unusual in Irish art history”. Stressing the political implications of this picture, she alludes to the legacy of the grievances endured by the Catholic majority over the centuries that Macdonald has packed into this “complex” painting.

Besides his allegorical and genre paintings Macdonald also sketched contented “characters” in town and country engaged in courting, dancing, preparing for Mass, and road-bowling. In Irish Peasant Children (1846) there are faint hints of approaching disaster in the facial expressions of at least two of these innocents. A more realistic glimpse of peasant life in the back of beyond may be found in Tasting the Poitín in Ireland (1844) wherein several men are distilling and consuming this liquid fire inside a crude spalpeen while two barefoot children look on. The taster holds a long rifle just in case a gauger or policeman obtrudes. Needless to say making poitín was not a hobby but a rent-earning operation. In sum, Macdonald’s ability to capture so many of the simple pleasures and pastimes of plebeian life makes him eligible for the accolade of “the people’s painter”. Moreover, the meticulously compiled “interim catalogue” at the end of this volume attests to the astonishing quantity and variety of Macdonald’s productions in little more than a decade.

Alas, the paucity of personal letters – not to mention the absence of a diary – whet one’s appetite for information about Macdonald’s social, intellectual and love life in both Cork and London where he died from enteric fever in February 1853. Why for example did he return to Ireland in the “Black Year” of 1847? And how much or little did he see of the famine’s ravages? Here and there we find a few tantalising clues about his private life. Moreover some readers may wish for a fuller discussion of the relevance of “Empire” to the artist’s productions. Designed to accompany a splendid exhibition of Macdonald’s paintings and pen and ink drawings, curated by O’Sullivan at Ireland’s Great Hunger Museum near Quinnipiac University, this volume stands on its own many merits. If she has used a smaller canvas than that chosen for her sumptuous study of Aloysius O’Kelly (Field Day, 2010), her portrait of this artist as a young man is a worthy successor to that magnum opus.

L Perry Curtis is professor emeritus of History at Brown University, in Rhode Island, and author of Apes and Angels: The Irishman in Victorian Caricature