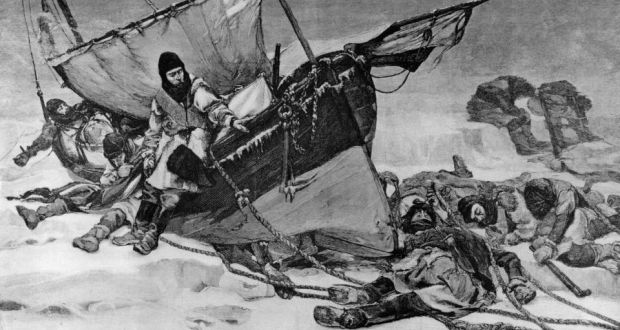 The fate of Sir John Franklin’s last Arctic expedition was the great mystery of its time, Amelia Earhart, Lord Lucan and the Bermuda Triangle rolled into one.

In her tireless search for her husband, vanished in the Northwest Passage in 1845, Lady Jane Franklin eclipsed even Queen Victoria as the pre-eminent widow of an age that fetishised female mourning. A formidable traveller, fundraiser and lobbyist, she wheedled the admiralty, and a plethora of private and state benefactors, into outfitting dozens of expeditions to search for the 129 officers and men of HMS Erebus and HMS Terror. Scores of ships were sent north and scores of books were inspired.

Strangely, the searches continued long after the puzzle was essentially solved. Nine years after the ships disappeared, local Inuit told the explorer John Rae that the vessels had been abandoned off King William Island after two winters trapped in ice.

The weakened survivors had clearly hoped to escape south along Great Fish River – now Back River – to the Canadian treeline. They all starved to death, although not before some had been driven to cannibalism.

Rae was the subject of outraged opinion, led by Charles Dickens: how dare Rae claim, on the word of mere savages, that noble English sailors could be reduced to such a state? Even after his account was confirmed by physical evidence, including a laconic note left in a cairn by Franklin’s deputy commander, the Banbridge-born officer Francis Crozier, questions continued to multiply.

Where were the logs and records of Erebus and Terror? Why had no messages been deposited along the expedition’s route to show searchers its intentions? Did some of the crew live on in the far north, perhaps supported by Inuit? Where had the ships themselves sunk or been driven ashore? Each new discovery only raised new families of little mysteries.

As in the Victorian era, so in the 21st century. In Ice Ghosts: The Epic Hunt for the Lost Franklin Expedition, a page-turning blend of dramatic history and cool reportage, the Pulitzer-winning journalist Paul Watson relates how the recent rediscoveries of the wrecks of both Terror and Erebus, the mother lode of the Franklin mystery, have blown open our understanding of what happened after the ships were abandoned.

Erebus, the flagship, found with the help of the Inuit folklore detective Louie Kamookak in 2014, was where the “Eskimos” had long since told searchers it was, 150km south of where it had been abandoned. The same Inuit had also told 19th-century searchers that white men were still living aboard shortly before it went down.

HMS Terror, found with the fortuitous help of another well-informed local Inuit, was in an even more interesting place: Terror Bay. (The name is one of those coincidences that the Arctic seems to delight in.) Clear around the southwest cape of the island from where it and Erebus were officially abandoned, it could not have been carried there by currents alone.

It seems that, contrary to the wisdom of the past 150 years, both ships were reoccupied after first being deserted, and had a tantalising chance of escape when the ice that had held them suddenly broke.

An experienced Arctic traveller, Paul Watson is writing here about what he knows: he visited the Canadian coastguard ship Sir Wilfrid Laurier shortly after it discovered the wreck of Erebus and before the find was announced.

Initial inspection of both wrecks suggests that they likely contain many more clues to the fate of the expedition; it is even possible that some of their papers survive. But with diving limited to only a few weeks in these ice-choked northern waters, any new revelations will take time to emerge.

Wisely, Watson has allowed for this in his narrative, which begins with a retelling of the epic Victorian quest to learn the fate of Franklin and his men, then moves on to the modern traders, Inuit, scientists and obsessives whose investigations finally combined to recover the lost ships.

The historical chapters breathe new life into the often-told tale of the 19th-century Franklin quest; the book is particularly good on Franklin’s widow, Jane (as Watson pointedly calls her), who emerges as a much more rounded and sympathetic figure than the Bracknellesque Lady Jane of popular history.

Watson has done a lot of good footwork and pays due respect to the intertwined spiritual beliefs, survival skills and oral traditions that allowed local Inuit to point out the locations of Franklin’s lost ships. A former senior reporter for the Toronto Star, he is himself well placed to shed light on the political intrigues and geopolitical calculations that in part motivated the Canadian government’s support for the new search.

By reclaiming the wrecks, Canada has restated its control over its remote northern archipelago, a sovereignty challenged by Russian mineral claims in the Arctic Basin and by Russian and American insistence that the Northwest Passage – soon to be ice free, due to global warning – is not Canadian territorial water but an international strait.

Built as Royal Navy warships, Erebus and Terror may yet find themselves in service again.