Hurdy Gurdy: The absurdities of the human condition in the middle of a plague

Book review: Wilson creates a rich seam of comedy and tragedy through the fatal overlap of ignorance with the fervour of the religious zealot 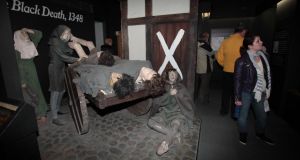 An exhibit depicting the Black Death. Brother Diggory initially believes the plague is God’s way of deciding “to rub us out and start over again”. Photograph: Brenda Fitzsimons

Now here’s a palate-cleanser of a novel for you. There’s something refreshing about a book that springs out at us unforeseen by fashion or precedent, though we might expect the unexpected from Christopher Wilson, whose previous fiction has ranged in subject matter from a zoo in 1950s Moscow to a monkey shipwrecked on an island to Victorian music-hall London.

Wilson’s speciality in his eight previous novels has been the outsider – a “gentleman cannibal” scientist (Baa); a Brazilian tribesman transplanted to London (Mischief); or a black boy in Mississippi who passes as white and can hear other people’s thoughts (The Ballad of Lee Cotton).