Paddy Hayes on Daphne Park, Queen of Spies, best known for her role in Patrice Lumumba’s overthrow, and his new insight into the killing of nine Irish UN soldiers 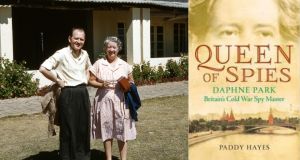 Daphne Park with MI6 colleague Hugo Herbert-Jones on route to Stanleyville (now Kisangani) in the Congo in 1960/61. Five officers in total took part in the operation, the nature of which remains undisclosed. Photograph: courtesy of Sarah Herbert-Jones

Queen of Spies is the biography of the late Baroness Daphne Park (1921-2010), a senior controller in Britain’s Secret Intelligence Service, popularly known as MI6. Park’s entry to the secret world came about in thesecond World War when she served in the Special Operation Executive (SOE) as a coding instructor and as a briefing and dispatching officer (responsible for dispatching secret agents on their missions behind enemy lines). After the war she joined MI6, serving in Paris, Moscow, Léopoldville (now Kinshasa), Lusaka, Hanoi and Ulaanbaatar. She is probably best known for her role in the overthrow and subsequent murder of Patrice Lumumba, the first prime minister of the independent Congo Republic.

From as long ago as I can remember I have been fascinated by spies. Had I been born in a different country I might even have contemplated joining a spy service but the Ireland in which I grew up did not boast of one. So I remained a close observer of the espionage world and became an entrepreneur instead, safer if not so exciting. Spying is sometimes described as being the second-oldest profession (prostitution allegedly being the oldest). Either claim may or may not be true: certainly the desire to know – usually in order to forestall – the intentions of one’s enemies is a deeply embedded desire among most rulers and it has led to the creation of what is now a multibillion-dollar global activity impacting on the lives of millions. The fascination that I (and much of the public) have with the profession is easy to understand. Spying contains all the elements of drama. It has deception, dissembling, deceit, danger and occasional dollops of sex, though practitioners will tend to play down that last aspect.

The element of espionage which most excites my passion is human spying (so-called HUMINT). This can be summarised as the recruitment by one country’s spy service of citizens of another country who are prepared to provide secret information to that spy service in return for reward. Okay, it’s a bit more complicated than that. For a start the motivation of agents can be complex. Some indeed betray for money, others for excitement, for revenge, to feel important or because they are forced to. As a former British SIS (MI6) officer told me once: “My job was to point out to the potential source the benefits of co-operating with us which includes avoiding the consequences of not co-operating.”

And it can be about more than simply providing information. An agent (agencies prefer to use the word “source”) may choose to collaborate with the intelligence service of a foreign power for a variety of reasons. They may believe that the collaboration will actually advance their own country’s interests or more usually the sectional interests of the group of which they are members or affiliates. They may be quite selective in deciding what information they will turn over and what will remain undisclosed. For that reason one of the more important classifications that spy agencies use to categorise their sources is the degree to which the agency controls their actions. “Fully under our control”; “partially under our control”; “not under our control” etc. The category “fully under our control” being by far the most preferable.

My interest in writing about Daphne Park stemmed from our meeting in the mid-1990s. With the ending of the Cold War it was decided by the British government that the Secret Intelligence Service (SIS/MI6) should be placed on a statutory footing. Human rights legislation, employment law and civil society generally were combining to make the continuation of its “does not officially exist” status untenable. As part of this process (called “avowal”) Park was permitted to provide an interview for the BBC’s Panorama programme on the work that MI6 did. It was a heavily-censored account but was still a first.

I had been aware of her existence for some time. She had become known, mainly from her role in the overthrow of the Patrice Lumumba administration in the newly independent (Belgian) Congo in 1961 (described in detail in the book). Through a mutual friend, Lord Tordoff (she was a peer by then) I got in touch with her and arranged to meet for afternoon tea in the House of Lords one sunny summer’s day. I found her to be tough-minded, quite combative, steadfast in her distrust of the Russians and totally fascinating.

Queen of Spies launch: Why I wrote about Daphne Park

We did not stay in touch – she was too careful for that – but I followed her though the occasional interview she gave to selected journalists; the Daily Telegraph was one, The Times another, she was interviewed by Woman’s Hour on BBC Radio 4 and by Alan Judd (a former SIS colleague) for an address she gave to the Royal Society of Literature. All helped to build the picture.

Park passed away in 2010. Two years later I decided to write her biography and commenced my detailed research. I had the basic information on file and to this was added material from obituaries written by former colleagues and a detailed memorial tribute given by Sir Gerry Warner, an old friend and former deputy-chief of her service. For the book I interviewed some 20 of her former MI6 colleagues, most on condition of anonymity but those who can be named include the (late) Hugo Herbert-Jones CMG and Brian Stewart CMG, recently deceased, Julian Harston, Hugh Bicheno and her former No 2 in Leopoldville, John de St Jorre. I was helped too by her friends, former academic colleagues and students. The culmination is Queen of Spies, only the second ever biography published about a Cold War career officer in MI6.

The Niemba ambush, in which nine Irish soldiers on UN peacekeeping duties were killed by Baluba tribesmen in the breakaway province of Katanga, took place on November 8th, 1960. Documents (JB1015/400) unearthed in the British national archives as part of my research into the overthrow of Lumumba suggest that one reason for the ambush may have been the displeasure felt by (the then) Colonel Joseph Mobutu, the effective ruler of the Congo, at the visit by Jason Sendwe (an opposition leader in Katanga) to the Baluba and which took place under United Nations auspices.

Mobutu was reported by the British ambassador Ian Scott, to have “protested strongly” to the UN over the visit. It may be that he wanted to reassert his authority and ordered the tribesmen to attack the next available UN target, which turned out to be the Irish soldiers. That sort of behaviour would have been in character.

At about the same time (November 3rd, 1960) a Major CG Hunt of the Royal New Zealand Army Engineers submitted a report to London marked “SECRET- UK EYES ONLY” on the military state of the various UN troop country contingents (JB1015/411). About the Irish soldiers he remarked “Good, but their morale is dropping. The troops are not keen on overseas service.”

He was more critical of the Swedish contingent, saying “In Congo for a good time rather than to do a job”. Interestingly Swedish troops on duty in Elizabethville airport were probably the only UN soldiers in a position to save Lumumba when he was transported to Katanga to be murdered, but they choose not to intervene.