Heroes or Traitors? Experiences of Southern Irish Soldiers returning from the Great War 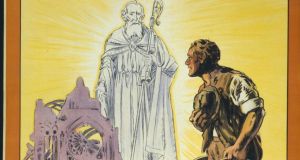 As a direct consequence of the Great War at least 30 million people, mostly men, were removed from battle zones to almost every country in Europe and many beyond. A hundred thousand of them came to Ireland. They made the journey in organised contingents, without the help of people-smugglers, although others had incurred fearful risks by fleeing the battlefields and 10 million had died. Tens of millions more had been prematurely withdrawn, mutilated, wounded, or shell-shocked; few of those who lasted the distance were untouched. These men, though they had fought for opposing armies, were united by one overwhelming experience that no civilian could share or fully comprehend. Scarred by war’s brutality, they had little in common with those in the host countries, where economic dislocation and rising unemployment made their arrival disruptive and, for many, unwelcome. They were not refugees, although the war also displaced millions of civilians. They were demobilised servicemen coming home – only to find “home” transformed in their absence.

The fate of Ireland’s war veterans is one of the least understood and most understudied stories of modern Irish history. Returning to an island increasingly engulfed by revolutionary violence followed by partition and civil war, they considerably outnumbered the IRA. One’s neighbours were more likely to have served in the Great War than the War of Independence. Yet it was the republicans who cornered the historical and commemorative market in southern Ireland, while veterans were politically sidelined.

The southerners who had answered “Ireland’s call” after August 1914 were mainly Catholic supporters of Home Rule within the British Empire, but by 1918 Sinn Féin’s ascendancy had prompted most nationalists to repudiate Irish participation and vilify those who had betrayed their patrimony by accepting the king’s shilling. These latent tensions between veterans and civilians were bound to produce further conflict and suffering as the veterans came to terms with their unexpectedly marginal status in the new Ireland. Historians confront three big questions: how much did veterans suffer during the revolution, how badly were they treated by their neighbours and rulers in the new state, and to what extent did they form a cohesive community?

Paul Taylor is the first to devote a book to Irish veterans – Heroes Or Traitors? Experiences of Southern Irish Soldiers Returning from the Great War, 1919-1939 – although many of his findings duplicate or expand on the work of other scholars, such as Jane Leonard. (Here I must declare an interest in the subject, having spent years living with Leonard and her veterans!) The book is based on an Oxford doctoral thesis, and thesis tunnel vision shows in what Taylor chooses to ignore or downplay: veterans’ associations, commemoration, Northern Ireland. (The story of northern veterans merits sustained comparative treatment.) Few Irish archives or newspapers are cited, many relevant studies are absent from the bibliography, and Taylor is unduly dismissive of previous scholarship in asserting his own originality.

The strength of Heroes Or Traitors? lies in its methodical use of personal documentation in selected archives, which are extensively extracted if thinly contextualised. Taylor looks at the quite generous provision of housing for veterans, already the subject of three studies, chronicling interminable battles between tenants in the Killester estate for ex-soldiers and the UK-funded administrative trust. He makes good use of pension files to suggest that southern Irish veterans did better than their British counterparts in provision for the disabled. Taylor echoes Leonard’s finding that the new state treated veterans fairly well, in that it did not interfere with material benefits funded by the hereditary enemy. This did not apply to civil service posts, to which veterans in the UK had preferential access. But tens of thousands of southern war veterans were briefly and controversially enrolled in the new National Army.

Taylor’s most provocative contention is that veterans, as a class, were not victimised during the revolution. As more than 100 ex-servicemen were murdered, and hundreds more sought compensation for injuries to property or the person, scholars such as the late Peter Hart detected parallels between the victimisation of veterans and of other “marginal groups”, such as Protestants. In each case it is seldom possible to prove that victims of violence were targeted solely or primarily because they were veterans (or Protestants). Their attackers may also have been motivated by greed, envy, personal grudges or the belief that the victims were helping the enemy. But if ex-servicemen were profoundly distrusted by republicans, and if they were targeted out of proportion to their numbers, it is reasonable to conclude that anti-veteran sentiment, like sectarianism, was among the forces driving republican violence.

Of greater interest is Taylor’s methodical extraction of compensation files for southern loyalists, held at the UK national archives in Kew and already sifted by many scholars. Having inspected all 3,000-4,000 case files, a barely credible feat of masochism, Taylor identifies 262 claims relating to civilian war veterans, of which “only” 73 cited war service as one of the required proofs of loyalty. Who can tell how many others have escaped even Taylor’s vigilance? His illuminating summaries of individual claims demonstrate that many veterans were indeed unpopular for various reasons apart from war service. Yet Taylor’s analysis raises problems. First, compensation was available only for injuries incurred after July 1921, thus excluding the entire revolutionary period during which veterans were most alienated, vulnerable, and at risk. Second, although the terms did not preclude applications from “loyal” Home Rulers, the Irish Grants Committee was clearly biased in favour of unionists. As only about 15 per cent of those enlisting from the 26 counties were Protestants, most victimised veterans had little prospect of securing compensation.

Crucially, Taylor’s denial of republican hostility to veterans as a category seems unsustainable. Abomination of “traitors” who joined the forces was a major propaganda theme for Sinn Féin from its foundation; “separation women” were repeatedly abused; local boycotts were directed against veterans; and republican councils often discriminated against them when allocating funds for jobs, land, or housing. On November 30th, 1922, Liam Lynch, republican chief of staff in the civil war, ordered that “all ex-British Army officers and men who joined F.S. [Free State] Army since Dec. 6, 1921” should be “shot at sight”. Twice citing this order, Taylor perversely implies that it did not reflect animus against war veterans in general. Determined to affirm their national credentials, he declares that “many ex-servicemen joined the IRA” (100 or so), and that “a majority became Fianna Fáil supporters” (an unverifiable claim). As in the debate about republican sectarianism, historians will continue to differ about the force of hostility to veterans as a factor in republican violence. Taylor has reopened but not resolved this thorny issue.

Taylor concludes that veterans as a group were neither heroes nor traitors, being a mixed bunch embodying broader communal divisions of class, politics, and religion. Never does he grasp how crucial the war experience was for those who endured it, forging a powerful bond of comradeship refreshed in pubs or clubs and consecrated on Remembrance Day, transcending social and political differences. This is a book about war veterans that scarcely mentions what they did in the war. Though neither the first nor the last word on a momentous topic, it is nonetheless a substantial contribution that should provoke others to invigorate the debate.

David Fitzpatrick, professor of modern history at Trinity College, Dublin, is the author of Descendancy: Irish Protestant Histories since 1795