‘Here is a woman looking at all that life contains and saying yes, I’ll take it’

Anne Tannam’s poetry lifts you out of the ordinary and shows you why all experiences are worthy of appreciation, how grief is as important and beautiful as joy 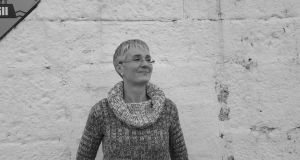 Anne Tannam: thanks the world for what it has given her, praising all the sadness and beauty

I first met Anne Tannam in the dimly lit basement of the Twisted Pepper. Upstairs, drums throbbed and mascara was rampant. Downstairs, a jungle of leather stools and wooden benches were occupied by writers who seemed oblivious to the shenanigans going on above. There the writers sat, pints to one side, heads bent over bundles of paper, marking them carefully with pencils and pens, as a middle-aged man read nervously from his page.

I was late, new to Dublin, and stressed out. I’d been wandering along the Luas track, around Mary Street and Capel Street, asking strangers if they knew where the Dublin Writers’ Forum was. Of course, they did not. Changing tack, I asked about the Twisted Pepper and was promptly pointed in the right direction.

Standing in the basement, my first instinct was that I’d made a terrible mistake and that I should forget this and stop being so ridiculous. But then, just as I was formulating an escape plan, a slight, grey-haired woman looked up from behind glasses, smiled and gestured towards a stool. There was something about the way she did it, which made me feel instantly at ease. Without saying a word, Anne Tannam gently nudged me to take a seat in the poetry world.

A seat which I perched tentatively on for most of the night. I remember the exact moment when I forgot about my own anxieties, when I stopped fidgeting or wondering what I could hope to add to the conversation. It was when Anne’s turn to read came along, and the poem she workshopped was Rise. A poem which ends this collection – and for me that feels as if life is doing one of those elegant full circles.

The poem was effortless and honest, describing the exact moment when all troubles lift from your shoulders, and for an instance you simply are: “And just today on the canal / twenty swans or more / took sudden flight /their wings low and heavy / gathering speed / over startled waters. / Passers-by stopped /in their tracks, mesmerised, / and for one weightless moment / forgot they could not fly.”

I sat rereading those words, as comments filed in from the other writers in the room. Her poem was having the same effect on me, as the swans in the poem were having on the passers-by. I had forgotten everything but the poem, its immediate grace, as it lifted me upwards. The words were walking around, stretching their poetic legs and filling up all the rooms in my head. I don’t know if I knew then, but I had found a new favourite poet. There she was sitting in front of me, eating chocolate biscuits and chatting away, in her no-nonsense manner, as if she was just another ordinary person.

I didn’t know much about poetry, I liked the poems which made me feel something. And her work made me feel

At the time, I didn’t know much about poetry, I liked the poems which made me feel something. And her work made me feel. This collection is among many things the story of a middle-aged woman as her children grow up and her mother slowly dies of cancer. Perhaps that sounds like it might be depressing, but the poetry lifts you out of the ordinariness and shows you why all experiences are worthy of appreciation, how grief is as important and beautiful as joy. Yes, some poems are devastating, but they also reach out, give you an auld pat and let you know that everything will be okay.

I’ve read along as Anne has written the Tides Are Shifting Across My Living Room Floor. The poems have brought me into Anne’s life and I find myself in the most privileged of positions, watching the world from inside her head. Here is a poet whose work gives thanks at every corner. Perhaps this is best exemplified with an extract from Thanksgiving, a poem which gives praise to the wealth of living:

“See here, seven stitches/ gained twenty-eight years ago/ cycling into an open van door. / When I touch the faded scar / I feel again the surgeon’s hands / small and expert, gentle on my broken skin, / give thanks for the gift of his confident touch /and this unshaken body I’m still cycling in.”

Even when questioning, unsure, or faced with the sadness of her mother’s terminal illness, her words reach out and grab at the life she’s been given. These poems present life to us, with thanks, with knowing, with purpose. So that we learn something, our ideas shift a little, and the world seems different by the end of the book.

Just as Anne nudged me to take a seat in the poetry world, this collection could serve as a gateway for the uninitiated (those who were put off by the Leaving Cert, or feel that poetry is too big a word to bother with). This book takes the stuff of life, subtracts any shade of sentimentality or nostalgia, and serves it to us in simple language, with honesty and integrity:

“I’m not myself today. / Or if I’m being honest / I am myself, just not the version / I want the world to see. / The self I am today / – this porous, fragile thing – / tries so hard to stay contained /while my appropriate self looks on”.

Here is a woman looking at all that life contains and saying yes, I’ll take it. Even when she is considering alternative selves, the illness and death of her mother, or her children becoming not her children anymore, the reader feels strangely uplifted. As if through the direct nature of the language, we are given permission to understand and accept the very humanness of being.

Anne documents the shifting times, but more than that, she thanks the world for what it has given her, praising all the sadness and beauty. The poems gently nudge the reader to sit awhile in the poetry world and let it lift them from the ordinary – because if this poet knows anything, it is that life is an extraordinarily beautiful thing.

The world spun on –
same rotation from West to East,
same speed, same seasons
in the same order.

Tides did their usual thing,
waves made their lapping sounds,
seagulls screeched their indignation.

Over in No. 80
small changes were noted:

the kitchen table
listing to one side,

no back and forth
of a conversation
sixty years
in the making.

the faint sound of

and Louis Armstrong
having to remind us
it’s a wonderful world.

That First Year first appeared in The Stinging Fly Summer 2017 (Issue 36, Volume 2). For more information on Dublin Writers’ Forum, contact Anne or Fióna at dublinwritersforum@gmail.com or check out their Facebook page . Tides Shifting Across My Sitting Room Floor is launched at 6.30pm on Wednesday, May 10th at Books Upstairs, D’Olier Street, Dublin 2. For more information or to purchase a copy of the collection, go to salmonpoetry.com