Latest Potter instalment should be read for what it is: a play and not a novel

Fans crowd a London bookstore for the midnight release of Harry Potter and the Cursed Child. Billed as the eighth installment in the series, the play and a book based on its script have helped awaken a new wave of Pottermania. 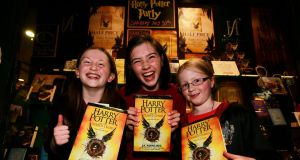 Roisin O’Neill, Lucia Kelly and Emer Feeney in Hodges Figgis book store with their copies of Harry Potter and the Cursed Child which went on sale at midnight on Saturday. Photograph: Nick Bradshaw/The Irish Times

The release of Harry Potter and The Cursed Child is surely the most highly anticipated publishing event of the last decade. It is almost 10 years since the publication of the final Harry Potter instalment, and creator J.K. Rowling was adamant at the time that there would be no more novels in the series.

However, she has frequently given fans updates on the characters’ futures and further details of their histories on her encyclopedic digital platform, Pottermore. With The Cursed Child she has not broken her promise.

This new Potter book is not a novel, nor is it actually written by Rowling. It is a playscript written by Jack Thorne, which is currently running in production at the Palace Theatre in London, based on a story co-authored by Thorne, Rowling, and the play’s director John Tiffany.

So, Potter fans expecting Rowling’s authorial stamp or the depth of magical and fantastical description that created an entire alternative world for them in their imaginations, will be disappointed with this offering.

The Cursed Child is composed of dialogue and scant stage directions: fundamentally, it is a text that is made to be staged. Still, as an incentive to try procure a ticket to the entirely sold-out run, it will have you wishing for an Elder wand and an accio charm to materialise the impossible for you.

The plot of The Cursed Child has been a secret as heavily guarded as the entrance to The Chamber of Secrets in Potter Book Two, where Harry defeated the fearsome Basilisk who was waging war on Muggles (non-magical citizens of the fantasy realm).

The Cursed Child picks up where the 7th instalment, The Deathly Hallows left off. The novel’s controversial epilogue reached 19 years into Harry’s future, where Harry is Minister for Magical Law Enforcement, Hermione is Minister for Magic, and peace has reigned since the defeat of Voldemort at the Battle of Hogwarts.

Harry as a dad

Harry is married to Ginny Weasley, with three young children, and as The Cursed Child opens, Harry’s second child, his 11-year-old son, Albus Severus, is about to leave home for Hogwarts, where he will be schooled in wizardry, just like his father.

The excitement is building. Doors open at 10pm. #CursedChild pic.twitter.com/AYQ91ILhsZ

For everyone wondering what the pages of #CursedChild look like (& haven't gotten the book yet), here's a glimpse... pic.twitter.com/Pm0iwBIbIF

7 may be the most magical number, but these #HarryPotter and the #CursedChild stats are pretty spellbinding pic.twitter.com/E75kfz4jsq

If the central theme of Rowling’s novels is the power of friendship, The Cursed Child focuses on family. Harry Potter is the most famous orphan of 20th-century children’s literature, and The Cursed Child allows the writers to explore how a grown-up Harry might try to compensate for his miserable childhood in his relationship with his own children.

Being a father is not as easy as conjuring an Amortentia love-spell, however. Indeed, being a father, as Harry confesses to Albus in one of the most sentimental scenes (and there are a few that vie for the title), is “the thing that scares me the most... Because I’m operating without wires here. Most people have a dad to base themselves on... I’ve got nothing – or very little. So, I’m learning okay? And I’m going to try with everything I’ve got - to be a good dad to you.”

Albus doesn’t make it easy for him. Named after two of the most complex heroes of the Potter novels , Albus Dumbledore and Severus Snape, he struggles to come to terms with his father’s legacy at Hogwarts and to forge his own identity.

As The Cursed Child begins he is “an irrelevance. Even portraits turn the other way when he comes up the stairs”, as one of the popular students puts it. The theatrical format allows us to skip quickly through his first few years at Hogwarts in short snappy scenes, and the repetition earmarks a structural device that Thorne will rely on to great effect as the time-travelling plot develops.

As the main thrust of the narrative begins to unfold, Albus is a sullen 14-year-old, rebelling against his father’s heroic reputation. He doesn’t quite turn to the forces of darkness, but he does decide that his father’s deeds were not quite so heroic.

With the help of his best friend Scorpious Malfoy, son of the much reviled Draco – who can always be relied on “to make the world a murkier place” – and a stolen Time-Turner, the action rolls back to the famous Tri-wizard Tournament in The Goblet of Fire, in which Cedric Diggory was killed and Harry’s status as future saviour of the realm was confirmed.

The Time-Turner device allows the authors to rewrite familiar plotlines and imagine alternative endings. The “never-world of time change” is also an every-world of endless possibilities, something that Potter fans who have flirted with fan-fiction will surely delight in.

Indeed, The Cursed Child will probably appeal to this readership the most, as it develops various slash-fiction strands that have dominated the digital tribute genre.

In particular, the homo-erotic tone of the evolving friendship between Albus and Scorpious feeds into the LGBT appeal of the series, although this section of the audience will surely be disappointed in how the writers quickly re-establish romantic “norms”’ in the final scenes of the book.

Laid out as a four-act play in two parts, Thorne’s text does make some concessions as a document to be read, injecting brief but atmospheric descriptions and distinct tonal definitions of action at various points. There is none of the fulsome world-building however, although super-fans will surely have a vast visual universe from which to draw their own imaginings.

Since the final instalment of the Harry Potter novels, Rowling has focused on developing her literary voice in The Casual Vacancy and her crime alter-ego Robert Galbraith, in the Cormoran Strike trilogy.

The fact is that it is Thorne’s signature that defines The Cursed Child rather than her own is telling. This is Harry Potter as franchise rather than the real deal.

Even so, I would happily join the queue for tickets to the play when the next batch are released to the public for sale, and you would be better off following my lead, saving the €19.99 for some popcorn at the interval.