Hankering after something vanished

The thoughtful, ambitious poems in Leanne O’Sullivan’s new collection bring the past to life 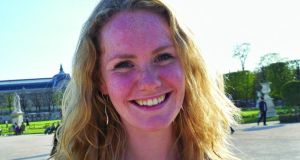 Townland , the opening poem of The Mining Road (Bloodaxe, £8.95), is a brilliant example of the way Leanne O’Sullivan can conjure distance and intimacy as she returns to images of the past. It begins with what seems like a straightforward if unusually assured invocation of a particular place:

A hankering in the skull, uttered and worked,

the stagger of heather beds cleaved in the throat;

Gorth and Ahabrock, and in the old stone walls

For three lines O’Sullivan stays with the grounded sound of “hankering”, and its hard K sounds, before reaching for the long O and sibilance of “old stone walls / the swallows going”, a shift in sound pattern that reflects the way the poem itself hankers after something that vanishes before it can be fully grasped or understood. At this point the poem changes direction, turning away from a simple snapshot depiction of place and following instead the “windborne rumours”.

Now, as she will do in many poems in this impressive book, O’Sullivan reveals something else: that this hankering itself might be what is desired, that the place or townland would have no meaning anyway without this feeling for it. The poem ends in “the roofless village a thousand times passed, / and beyond, the waning lift and turn of a gate, / the fall of banked moss, and all of us listening”. As in the opening lines, O’Sullivan gives us the place, but then in addition she gives a name to the kind of attention that brings that place to life.

Here and elsewhere in The Mining Road O’Sullivan shifts away from the kind of “topographical” poetry of place that has become common in Irish writing, choosing instead to locate the place’s meaning in “all of us listening”. O’Sullivan repeatedly presents us with objects or places, which then act not as statements of arrival or recovery but as points of departure.

Things we have seen before, often in other people’s poems, come alive again in her hands: grandmothers, antiques, emigrant parcels and, in Puxley Castle, Dunboy , a burnt-out big house, although O’Sullivan’s poem seems to lament not the destruction but the restoration of the castle. The “vaulting birds” and “starlings banking in the eaves” are absent since the ruin was (partially) renovated by a property developer; “Toe the ash” goes the poem’s refrain, before its mysterious close: “I’ll mind an uncle who comes striding / from the fires. Oh boys, says he, / We’re all a sea door down.”

Seamus Heaney’s early books, with their vivid looks at unregarded lives and places, are an obvious reference point for The Mining Road , but her interest in the past and her reclamation of sidelined traditions are slanted through a sure sense of her own imaginative preoccupations. In the title poem O’Sullivan imagines her grandmother, like Penelope in Ithaca, unravelling and reknitting a cardigan again and again, a process O’Sullivan sees thus: “like grass swallowed down a shaft / the wool quivers up again towards her lap”. This surreal image is stunningly reused to describe her mother and grandmother “leading each other where the road winds down, / and carries on, past where they thought it would end”.

O’Sullivan’s poems often find these kinds of places. Where the road should end, she finds a rich underground world whose dark spaces she moves around with familiar ease; the worked-out mine offers paradoxically fruitful material from which she will quarry her poems.

The sequence Man Engine describes the copper mines of Allihies, in west Cork. At the initiative of a local landlord (the Puxley who built Puxley Castle), the mines were worked in the early 19th century, mostly by Welsh and Cornish migrants: it is easy to see the attraction of the material for O’Sullivan, who describes the mineshaft as “the dark / always ascending // and the light / retreating softly”, but this sequence feels barer even as its narrow stanzas and emphatic stresses nicely imitate the work it describes.

A different historical moment is the subject of the outstanding Safe House , which reflects on the War of Independence: a child’s discovery of an on-the-run IRA man’s gun leads to a tragic misadventure that is erased even as it is told: “There was never a map that could lead back to / or out of that place, foreknown or imagined, / where the furze, the dark-rooted vetch, turned / over and over with the old ground and disappeared.”

This stanza seems to declare the insufficiency of maps, and by extension any writing that impossibly attempts to make up a lost past, but then such a declaration is countered by the force and ingenuity of O’Sullivan’s poem, which does offer a new “map”, one in which a house is made completely unsafe.

The Mining Road is a strong and varied book of poems: it includes lighter moments, a couple of stabs at imagining the future – a cosmic apocalypse mediated by Stephen Hawking – and witty love poems. Its best poems, however, are slow and concentrated pieces that register with great clarity the mystery of stories and images that exercise power over us, images and stories on which readers will dwell.

At a time when historians, novelists and journalists are again revising our national narratives, these thoughtful, ambitious poems bring the past to life, but they also ask if any imagination of the past, no matter how rich and inevitable it feels, can ever be quite enough.

John McAuliffe’s third collection, Of All Places (Gallery Press), was a Poetry Book Society recommendation in autumn 2011. He codirects the Centre for New Writing at Manchester University, where he also co-edits The Manchester Review .