The poet, as a professor in 19th-century UCD, could not control his students 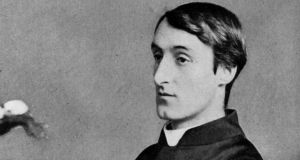 To a non-Irish observer like myself, it does Ireland immense credit that the country has taken Gerard Manley Hopkins so enthusiastically to its heart. It is Ireland, not his native England, that honours the Victorian poet with an annual festival, houses the world’s leading Hopkins archive and gives an annual set of awards in his name. This is more than fair, considering that Hopkins himself did little but grouse about the “hard, wearying, wasting, wasted years” he spent on Irish soil.

Of the 28 poems he wrote in Ireland, the six known as the Terrible Sonnets are the most arresting. For anyone who has known depression, the gut-wrenchingly bleak No worst, there is none, which ends with the crumb of comfort that “all life death does end and each day dies with sleep”, is the poetic equivalent of Munch’s The Scream. It’s hardly complimentary to his adopted home, and the best we can say is that Hopkins’ misery was literature’s gain.

In fairness, he had a genuinely awful time of it. In episodes I dramatise in my novel The Hopkins Conundrum, the unhappy soul who would eventually be recognised as a literary visionary arrived as Professor of Classics at University College Dublin in 1885. The Irish province of the Society of Jesus, which had taken over the running of the university, was dead against English Catholic converts joining their staff, so his appointment was bitterly contested. It was a bad start for a sensitive, frail creature who was already a misfit as on his own side of the Irish Sea.

The university itself was a sorry institution, operating out of a rat-infested building on the south side of St Stephen’s Green, bereft of books because the committee that gave the place to the Jesuits decided they wouldn’t need a library. Although he took his responsibilities seriously, Hopkins was a terrible teacher with no ability to control unruly students. When those students found out that the funny little man trying to teach them Latin and Greek was an English conservative with an Oxford accent and hopelessly hostile views on Home Rule, they made themselves as unruly as possible.

The eldest child of a London shipping insurer, he had converted to Catholicism after leaving Oxford and then joined the priesthood as a Jesuit. Without telling his superiors, he toiled privately for years composing verse in a radical system of metrics of his own devising. His most ambitious work, written in north Wales, was inspired by a shipwreck in the North Sea whose victims included five German nuns. Unfortunately, with its complicated syntax and unconventional form, The Wreck of the Deutschland baffled all who saw it and Hopkins’ attempts to get it published came to nothing.

He was still writing when he reached Ireland, but his sense of failure was intense and his mood was not helped by his disappointment at finding how far Dublin had fallen from its Georgian elegance of the previous century.

It was not all misery. He befriended the future novelist Katharine Tynan and the painter John Butler Yeats, whose studio was on the other side of St Stephen’s Green. There he met the latter’s underwhelmed son William, who later wrote: “A boy of seventeen, Walt Whitman in his pocket, had little interest in a querulous, sensitive scholar.”

He also enjoyed holidays in Co Kildare, home of today’s Hopkins Festival, and some of the poetry he wrote was relatively cheerful. The pagan-style Epithalamion which he composed for his brother’s bride on her wedding day positively bubbled with happiness. Unfortunately he couldn’t finish it. As the Hopkins scholar Norman White observes: “[He] was writing a poem of joy in Dublin, where he could not write joyous poems.”

The real problem was the city, and his job there. Having dreamed of a genuine academic posting, he discovered he was mainly expected to mark exam papers. He loathed this work with a vengeance, especially as eye strain gave him great pain. Some worried friends tried to arrange a transfer back to a Jesuit post in Britain, but before that could happen he fell sick and died of typhoid – most likely a result of leaking drains at St Stephen’s Green – in 1889, aged just 44.

He lies in Ireland still, in Glasnevin Cemetery. It was not until 1918 that his Oxford friend Robert Bridges – by that stage the poet laureate – published a collected edition and Hopkins came to be regarded as a genius who was way ahead of his time: one of the finest 20th-century poets the 19th century had produced.

The centenary of that first publication falls next year. Having written a novel which blends Hopkins’ life with a modern-day satirical comedy – otherwise it would just have been too grim – I hope the coming anniversary will see a resurgence of interest in the poet on my side of the Irish Sea.

Happily that will not be necessary on yours. For all that he suffered and complained, you have been generous enough never to forget him.
Simon Edge’s novel, The Hopkins Conundrum, a tragic comedy about Gerard Manley Hopkins and five shipwrecked nuns, is published by Lightning Books, at £8.99.
The Gerald Manley Hopkins Festival runs from July 21st-27th in Newbridge, Co Kildare