Daniel Mulhall, Ireland’s Ambassador to London, highlights a poet who was not as gifted as Yeats but whose inclusive approach to the events of 1916 was ahead of his time 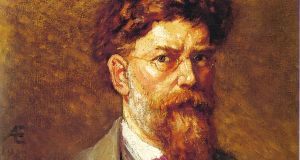 George Russell (AE) Self Portrait, 1923: “AE was well ahead of his time as it is only in recent decades that an inclusive attitude to the past has prevailed. He also acknowledged the role of women in the Rising, but without the condescension of Yeats”

For this centenary year, I plan to post a series of blogs on aspects of the Easter Rising and its legacy.

There are many approaches to the events of that momentous year for Ireland, but I want to begin with a literary angle. This is a rich vein, for remarkably three of the seven leaders of the Rising – Patrick Pearse, Thomas MacDonagh and Joseph Plunkett – were published poets, which has led to 1916 being described as a poets’ revolution. It was more complicated than that, of course, and there are many ways to explain why the Rising took place. To my mind, the main causes were the delayed arrival of Home Rule and the impact of the first World War.

Another feature of the Rising is the fine writing it inspired – WB Yeats’s Easter 1916 and Sean O’Casey’s Plough and the Stars being the two star examples. On this occasion, I want to look at another, less well-known poet, who also wrote about the Rising. George William Russell was born in Armagh in 1867 and moved to Dublin as a teenager. He met WB Yeats at art school in Dublin and the two formed a lifelong, if sometimes testy, friendship.

Russell, a somewhat unworldly dreamer and dedicated mystic in his early years, adopted the pen name, AE. His life changed in 1897 when he agreed to join the emerging agricultural co-operation movement as an organiser and later as editor of the organisation’s journal, The Irish Homestead.

AE shared with Yeats a belief in ancient Ireland’s spiritual qualities and this drew him into the broad nationalist tradition at the turn of the century. He was part of the Irish literary revival and was involved with Yeats and Lady Gregory in the founding of the Abbey Theatre, but soon parted company with them, devoting himself tirelessly for a quarter of a century to the demands of weekly journalism. As editor of the Irish Homestead, AE was the first to publish some of James Joyce’s stories that eventually became part of Dubliners. Joyce repaid this generosity by gently lampooning him in Ulysses (“AEIOU” – Leopold Bloom, and probably Joyce himself, owed him money!)

Unlike Yeats, AE did not normally produce poems on public themes, but tended to write in a broadly mystical vein. On behalf of some Irishmen not followers of tradition is an exception. In this poem, he is critical of those who wallow in “the dreams of worn-out yesterday”, “the worship of an extinct fire”. He describes himself as someone who would “gladlier hail”

The firstborn of the Coming Race
Than the last splendour of the Gael.

This was his riposte against those in the early 20th century who aspired to a Gaelic-speaking Ireland, which he saw as an unduly narrow aspiration. Russell was more forward-looking. He was all too familiar with the poverty of rural Ireland and believed in the creation of a better Ireland through the application of co-operative principles. He took the side of Dublin’s workers during the 1913 Lockout and came to know and admire James Connolly, who went on to become the leader of the Irish Citizen Army in 1916.

Like most people, Russell was taken by surprise by the events of Easter 1916 and responded with a poem entitled Salutation. AE was nowhere near as gifted as Yeats and his 1916 poem lacks the memorable phrases (“vivid faces”, “casual comedy”, “terrible beauty”, “too long a sacrifice can make a stone of the heart” etc.) that abound in Yeats’s Easter 1916, but Salutation deserves to be better known as we mark the 100th anniversary of those formative events for modern Ireland.

AE’s poem’s sub-title is “To the memory of some I knew who are dead and who loved Ireland” and its outstanding feature is that it deals not only with the leaders of the Easter Rising – Pearse, MacDonagh and Connolly – but also with those like Tom Kettle, the former Irish nationalist MP and UCD professor who died on the Western Front in September 1916.

You proved by death as true as they,
In mightier conflicts played your part,
Equal your sacrifice may weigh,
Dear Kettle, of the generous heart.

In taking this approach, AE was well ahead of his time as it is only in recent decades that an inclusive attitude to the past has prevailed. He also acknowledged the role of women in the Rising, but without the condescension of Yeats’s references to Constance Markievicz’s “ignorant goodwill” and her voice grown “shrill”:

Though the world cry on you in scorn,
Here’s to you, Constance, in your cell.

AE was a strict pacifist and could not share the attitudes of those who fought in 1916.

Here’s to you, Pearse, your dream not mine,
But yet the thought for this you fell
Turns all life’s waters into wine.

Like Yeats, therefore, AE harboured serious reservations about the Rising but could not help admiring the bravery and determination of those who died. He was close to Connolly and tended to see him as the Rising’s chief architect:

This hope unto a flame to fan
Men have put life by with a smile.
Here’s to you, Connolly, my man
Who cast the last torch on the pile.

AE brings his 1916 elegy to a close by recalling the complexities of that fateful year, “the confluence of dreams”

That clashed together in our night,
One River born of many streams,
Roll in one blaze of blinding light.

AE played a role in public life as a member of the Irish Convention of 1917-18 that tried unsuccessfully to broker a compromise between nationalist and unionist Ireland. He supported the Anglo-Irish Treaty of 1921 and, through his work as editor of the Irish Statesman, sought to influence the direction of the new Irish State. Like many others, he became disillusioned by developments during the 1920s, especially the introduction of literary censorship, and eventually left Ireland in 1933 and died in Bournemouth in 1935.

AE was no zealot; far from it, but yet he was captivated by the Rising and the sacrifice of its leaders. His response, and that of Yeats, helps us to understand how the events of Easter 1916 had such a profound impact on Ireland’s political development a century ago.