Gandhi, an expelled future president and first aid crews: the Indians of 1916 Rising

Indian law students from the King’s Inns served as an ambulance volunteer corps in the Easter Rising. Another, VV Giri, expelled for rebel links, became President of India 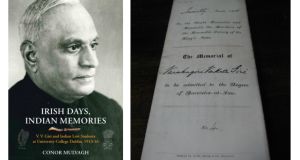 VV Giri, who went on to become President of India (1969-1974), was taught by Thomas McDonagh and called to the bar in King’s Inns in 1916, just before he was expelled from the United Kingdom for his links to leaders of the Rising. Giri wrote in his last letter to fellow president, Eamon de Valera: “Irishmen and Indians always tell me that next to being an Indian I am an Irishman”

At the outbreak of the first World War, Mahatma Gandhi was in London. Fresh from experiencing the horrors being suffered by Indians in South Africa, Gandhi believed that service in the war could prove the loyalty of Indian subjects. Just like Edward Carson and John Redmond in Ireland, Gandhi hoped that this loyalty would be rewarded at the war’s conclusion.

On the margins of mass militarisation how did Gandhi’s policy of non-violence fit with his desire to prove India’s loyalty in the conflict? His solution was found in the hospitals rather than the trenches. Indians living in Britain and Ireland were encouraged to volunteer for service with ambulance corps. This was to be Gandhi’s contribution to the British Empire in the first World War.

During the first World War, there were approximately 50 Indian students studying in Dublin. The vast majority came here to study law at the King’s Inns, UCD, and Trinity College Dublin. Among them was 20-year-old VV Giri from Berhampore in the Ganjam district of the Madras presidency. He studied for the bar at the King’s Inns and studied arts (English and political economy) and Law at UCD between 1913 and 1916. The Home Rule MP, John Gordon Swift MacNeill, taught Giri constitutional law at UCD. Meanwhile, one of Giri’s lecturers in English was none other than Thomas MacDonagh. Giri was no different to his classmates in Dublin at the time, indeed academically he was unremarkable. However, he is exceptional because, after a career as a prominent trade unionist and labour leader, he became the fourth President of India, 1969-74.

One of Giri’s biographers recounts the meetings between Gandhi and the young Giri in the summer of 1914 as war loomed. GS Bhargava claims that Giri “felt that England’s difficulties were India’s opportunity” and disagreed with Gandhi’s desire to assist the imperial war effort. When Gandhi appealed to the Indian youth in Britain to join the Red Cross, such was Gandhi’s spell on Giri that, as Bhargava explains “one day [Giri] gave in to the Mahatma’s persuasion and signed up as an officer to the Red Cross. But in his heart of hearts Giri was against rendering any assistance to the British in the war effort. After a sleepless night of introspection, he came to the conclusion that his agreement with Gandhiji was superficial. He, therefore, wrote a letter to Gandhiji saying that he had joined the Red Cross in a weak moment and wanted to give it up after rethinking. He asked for Gandhiji’s forgiveness for retracting from his promise.” Bhargava states that Giri made it clear to Gandhi that he “was prepared to own the responsibility for his action by publicly proclaiming the reasons for resigning from the Red Cross. This would have exposed him to potential prosecution under the Defence of the Realm Act.

“If Gandhiji had chosen to forward Giri’s letter to the Red Cross authorities, Giri’s tenure as a student in Ireland would have come to an abrupt end and he would have been sent home to suffer imprisonment,” explains Bhargava. “But Gandhiji with his characteristic magnanimity relieved Giri of the obligation to join the Red Cross and did not breathe a word about it to anyone.”

In the Benchers’ minute books at the King’s Inns, evidence shows that at least one of Dublin’s Indian students did answer Gandhi’s call. Aftab Rai, who entered the King’s Inns at Michaelmas 1914, was granted a memorial “that he be given credit for his First Year, having passed the Final Examination in the subjects of the lectures he did not attend owing to absence from Dublin on Military Duties.”

Among the roles taken on by Indian ambulance volunteers was care for Indian war wounded, who were shipped to military hospitals in Britain. In contrast to the approximately 200,000 Irishmen who served in the first World War, India provided 1.5 million troops to the war effort, according to the British Library. This constitutes the second largest volunteer army in world history; the largest being the 2.5 million Indians who served in the second World War. One well-documented concentration of Indian war wounded was at the converted Royal Pavilion in Brighton. The Pavilion accommodated over 600 Indian casualties from the western front and it is likely that Rai, whose military service card now resides in the British National Archives, served in a facility such as this.

However, Rai was by no means the only one of Dublin’s Indian law students to serve under the Crown during the war. When the 1916 Rising broke out, a corps of ambulance volunteers consisting of Indian law students from the King’s Inns saw service in Dublin city centre. Evidence for the existence of this unit has proved remarkably elusive. However, reference to it can be found in an account of a review of military and ambulance personnel who served during the Rising presided over by General Maxwell and prime minister Asquith in the grounds of Trinity College Dublin on May 13th, 1916. This was the day after the final executions of James Connolly and Sean MacDermott had taken place. The Irish Times estimated that a thousand personnel were assembled on this parade. Among the units and groups listed were “Indian students of the King’s Inns, who performed ambulance work [and] paraded with the Rathmines unit [of the Voluntary Aid Detachment]”. This is the only reference which has been found to indicate that Indian students served in an ambulance and first aid capacity during the 1916 Rising. While it gives tantalisingly little evidence about the nature of this service, it confirms conclusively that an unknown number of the Indian law students in Dublin were actively engaged in medical work during the insurrection.

However, Dublin’s Indian student community was anything but a monolith when it came to political outlooks. A month after the Rising, on the very first Empire Day, May 24th, 1916, police raided the homes of a number of Dublin’s Indian students believing a plot was under way for some sort of action that day. These raids appear not to have uncovered substantive evidence of an Indian student conspiracy. However, VV Giri, whose association with some of the Easter insurgents was known to authorities, was served with a month’s notice of expulsion from the United Kingdom on June 1st. Luckily for him, he was called to the Bar on June 21st, 1916 and left Ireland bound for India on July 1st. He never completed his studies at UCD.

Giri was heavily influenced by socialism while in Dublin. In later years, Giri emulated the tactics he had seen on his arrival in Dublin in August 1913. He organised a strike of transport workers on the Bengal-Nagpur railway line in 1927. What started as an industrial dispute in a single railway station in Khargpur grew under Giri to a strike of an estimated 35,000 of the railway’s 60,000 employees. It ground the entire line to a standstill for almost an entire month. After a subsequent lockout, unlike the Irish precedent, concessions were eventually granted to the workers.

Despite his socialist leanings, it was to de Valera that Giri gravitated in later life. The two exchanged several cordial letters while they were both presidents of their respective countries. Their hope to meet as presidents was never fulfilled but in one of his last letters to de Valera, Giri remarked: “Irishmen and Indians always tell me that next to being an Indian I am an Irishman.”