From the Battle of Clontarf to Stalingrad – history brought to life 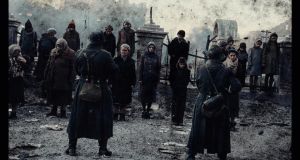 Calamitous: a scene from Stalingrad, about the Nazi onslaught on the Russian city in 1942-43, the subject of Nicola Pierce’s City of Fate. Photograph: Non-stop Production

If all the books that constitute Irish children’s literature were to be classified thematically it would soon become obvious that a very sizable number of them, perhaps even the majority, fall into the category usually referred to as historical fiction. In turn most of these would be seen to use events from Irish history as the background for their narratives.

This is hardly surprising, given that our centuries of historical development can easily be characterised as a series of confrontations and conflicts, the stuff of which vivid historical fiction, dealing with clashing ideologies and divided loyalties, is made.

Some excellent novels have resulted from this concentration on our evolution as a nation, but recent years have brought a welcome addition to our children’s literature, in the form of historical fiction dealing not merely with times past but also with places apart. Two recent novels from Irish writers provide interestingly varied examples of these two approaches.

The “historical note” appended to Eithne Massey’s Blood Brother, Swan Sister (O’Brien Press, €7.99) begins by reminding us that “the Battle of Clontarf is a historical event so enmeshed in folklore that it is hard to know where the story ends and the history begins”. In pointing this out Massey raises straight away the difficulty encountered by anyone setting out to write a historical novel: the balancing of fact and fiction.

Whatever balance is eventually attained, the lasting impression must be one of authenticity, allowing the reader of today to establish and develop a relationship with a time that, as here, may be 1,000 years distant and about which the amount of surviving factual material, as Massey acknowledges, is fairly thin.

The thinness of this available material makes Massey’s decision to “use the folklore surrounding the event to create a new version of the tale” totally understandable. It is an approach that, on the whole, works satisfactorily.

Readers unfamiliar with such facts as there are may initially have some difficulty with precise details of the various warring factions, their names, their allegiances and their rivalries.

Similarly, the “folklore” dimension of the story demands close reading if all its nuances, coincidences and parallels with the factual elements are to be appreciated. But, in more general terms, a clear and atmospheric picture soon emerges of a city under siege and of the everyday lives led by its “ordinary” citizens, as distinct from the complex existences of its rulers.

It is an important element of the narrative that Elva, Dara and Skari, its principal young characters, come from their differing perspectives to understand something of these complexities, especially where battlefield heroics “on the sands of Clontarf at dawn on Good Friday” are concerned. By the time we leave Dara surveying “the earthen mounds that had been raised on the dead men and boys” we are beginning to realise the full import of his experiences of April 23rd, 1014.

There is another “city under siege” in Nicola Pierce’s City of Fate (O’Brien Press, €7.99) but on this occasion the city is Stalingrad and the year 1942. “I wanted to use,” Pierce writes in a concluding note to the novel, “as much real material as I could to lay the foundation for – and with luck enhance – the fictional part of the story in my head”.

Few readers will not be impressed by the degree to which this aspiration has been fulfilled.

This is a consistently compelling novel, combining rich chacterisation with a powerfully evoked sense of time and place. If, as Umberto Eco argues, the historical novel “is not so much a fictionalised version of real events as a fiction that will actually enable us to better understand the real history”, then Pierce could easily have written her book to meet his requirements.

At the heart of the novel are the separate and interlinked lives of six teenagers and a five-year-old boy, all of them living through an experience that is devastating in its revelation of man’s inhumanity to man.

In a “tattered” city where “it was as if the gateway to Hell opened” they are fated to pursue their largely powerless lives, for power, in this adult-dominated world, lies elsewhere. As Tanya, one of the teenagers, points out, echoing a viewpoint to be found also in Massey’s novel, “it’s all about money and power”.

And yet, in spite of their powerlessness, the young people’s courage, determination and resilience – though expressed in different ways – are never in doubt. It is greatly to Pierce’s credit that she has achieved this balance without resort to easy sentimentality or oversimplification: complex moral situations merit complex exploration.

‘This could be Belfast in 1968’: How political conflict in the US could descend into violence
Real news has value SUBSCRIBE