From the archive: Starving to death – what it really means and how it was avoided

In The Irish Times on December 20th, 1980, David McKittrick explained the physical effects of a hunger strike and how British proposals swayed prisoners to end the strike 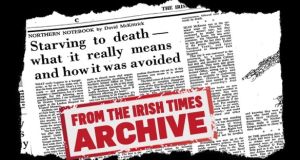 What really happens in a hunger-strike, as far as I can make out, is that the body eats itself. That’s a very crude – and probably medically incorrect – description, but it’s close enough. For the following more precise description, I am indebted to Dr Graeme Clubston, a nutrition expert at the London Hospital for Tropical Diseases.

Anybody can lose up to a quarter of their body weight without any ill-effects at all, and quite a few people have lost up to half before getting into trouble. It seems the average Western man can survive reasonably easily for around 50 days living off his own supply of fat and protein.

The first week or so is the hardest, but after that hunger pangs disappear. Under prison regulations, each meal has been left into the hunger-strikers’ cells: but after the first week there is likely to have been no temptation to tuck in.

In this middle period people can quite enjoy themselves: some become euphoric, a few undergo some sort of spiritual experience. The body brings a defence mechanism into play, making the starving man feel lethargic. Consequently he tends to stay in bed most of the time- which is what the hunger-strikers have done. This helps to conserve energy.

After 50 days or so comes the danger period. Having finished off the fat and protein, the body then starts to absorb more vital organs such as the muscles. According to the Northern Ireland Office on Thursday, the main risk to life at this stage is the “progressive disruption of vital bodily functions due to Vitamin B deficiency affecting the brain”.

But according to Dr Clugston, it’s very rare for a starving man to suffer from any vitamin deficiency, however strange that may sound to the layman. The eyesight trouble which affected Sean McKenna is quite an unusual symptom, and is presumably the result of a vitamin deficiency; but it seems impossible to believe that the rest of the hunger-strikers have it too.

Two vitamin deficiencies can affect the eyes; and if both get bad enough the effects are irreversible. With a lack of Vitamin A, the lens of the eye eventually becomes pulpy. With the lack of Vitamin B, little blood vessels start going across the front of the eye. These can’t be removed: if enough vessels appear blindness results.

DR Clugston lists three factors which are usually the specific causes of death in starvation. The first is the heart. The heart is a muscle, and it gets smaller as the body asbord muscle tissue. This can lead to heart failure.

The second cause is the muscle and cells lining the walls of the intestine These shrivel up and a profuse diarrhoea can set in. If this becomes very severe it is almost irreversible.

The third cause of death can be the weakness, or complete disappearance, of the muscles of the chest and diaphragm. The diaphragm doesn’t breathe properly and chest infection sets in. This combines with the general drop in body immunity- the body isn’t making antibodies anymore because of the lack of protein- to make it much more likely for some form of fatal infection to set in. Bugs which are usually harmless can at this stage be deadly.

Surprisingly too, experience in Nazi concentration camps and other studies have shown that a starving man usually remains lucid almost until the point of death. But although he can rationalise quite satisfactorily, his personality will often change: he can’t stand noises, he becomes irritable, his relationships with friends and family often break down. In the final stage, the starving man may become hypochondrical and obsessed with food. The presence of food may become a temptation. The end comes with a coma or unconsciousness, followed soon afterwards by death.

SEAN McKenna was in the terminal stage on Thursday. The doctors weren’t sure, but they reckoned he might only last another 24 hours. He was semi-comatose. On Thursday morning he was given the last rites by one of the prison chaplain, Father Thomas Toner, and later transferred to Musgrave Park Hospital.

That day it was conveyed to the prisoners, by a source they trusted, that the British Cabinet had met and decided to make no concessions. They were also given two documents from the Northern Ireland Office, setting out in very great detail the rights and privileges available to conforming prisoners. (Extracts from the documents were carried in some editions of yesterday’s Irish Times.

The documents broke no new ground, but they were couched in conciliatory language, they were tactful, and – without making any promises – they held out the prospect of generous treatment if the protest was to end. For example, prisoners would have to do work, they said – but work would not be “interpreted narrowly,” and could include education and other things.

The Government was standing firm but clearly, it was determined that the criticism of being “inflexible”– as the European Commission of Human Rights had labelled Roy Mason’s approach – should not be levelled at it again.

Everything was now up to the other six hunger strikers. Says an inside source: “They knew Sean McKenna was going to die. That was the choice they were faced with on Thursday. It wasn’t a question of their demands or anything else. It was a question of their mate dying within 24 hours, and knowing they were the only ones who could save his life.” With their skilfully drafted documents, the Northern Ireland Office made it easier for the hunger-strikers to choose life rather than death.

IN THE preceding days, Stormont Castle had been a hive of activity as Atkins and his senior aides explored ways of ending the dispute. Cardinal Ó Fiaich played little part in it all, but John Hume met Atkins three times during the week. One of Hume’s proposals showed the kind of subtle trains of thought they teach you at Maynooth. The authorities insisted that inmates wear prison-issue clothes for work periods; the prisoners demanded their own clothes. Hume suggested that both sides might be satisfied if prisoners were allowed to buy the clothes from the authorities.

But all these ideas went out the window with the Cabinet decision: and that decision, it turned out, was the right one. The Northern Ireland Office is diplomatically suppressing its jubilation, the Provisionals are dressing it up as best they can, Paisley is carping, but the inescapable fact is that the British Government won a major victory.

The exact extent of the damage inflicted on the Provisionals as the fighting force will take some time to emerge. In the meantime, the authorities will be flexible, even generous, in their treatment of prisoners. It has taken a year and a half and a hunger strike to do it, but the harshness of Roy Mason’s policies has been successfully reversed. For Humphrey Atkins, his permanent secretary Ken Stone and the rest of his officials, this will be a weekend for celebration.