The tricky role of priests in the War of Independence is chronicled in this important, thorough but awfully expensive work, writes Diarmaid Ferriter 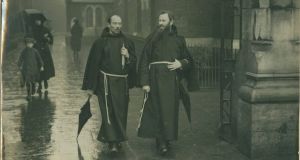 Fr Albert Bibby and Fr Dominic O’Connor, Franciscans who served as chaplains to the IRA from 1916 to 1922

In May 1921, after an ambush near Tourmakeady, Co Mayo that left two Royal Irish Constabulary constables and an IRA volunteer dead, the remains of the three men were removed to the same church in Ballinrobe.

Here, the parish priest, Edward D’Alton, had the IRA victim’s coffin placed in front of the high altar and both constables’ coffins before the side altars. Despite a protest from the RIC, the priest refused to alter the layout. D’Alton then accompanied the Archbishop of Tuam, Thomas Gilmartin, to Ballinrobe RIC barracks, offering his condolences, describing the victims as men of “excellent character”.

This extraordinary balancing act was one of the many responses of Irish Catholic priests and bishops to the War of Independence documented in Brian Heffernan’s hugely impressive, illuminating and excellently researched book. It is a great pity that Freedom and the Fifth Commandment: Catholic Priests and Political Violence in Ireland, 1919-21 is so ridiculously overpriced, because Heffernan has vividly filled a large gap in historical knowledge about how priests navigated exceptionally difficult circumstances and volatile times, and the book deserves wide readership.

Drawing on diocesan archives, newspapers, witness statements and contemporary correspondence, Heffernan skilfully weaves these sources together into a judicious, well-written overview. It largely focuses on the parish level, dealing with different attitudes of priests to the IRA and the impact of the British campaign on the clergy. And it underlines how they and their bishops by no means sang from one hymn sheet.

Early in 1919, Joseph Hoare, Bishop of Ardagh and Clonmacnoise, argued trenchantly that revolution would make the Irish “the prey of their enemies”, and suggested that secret societies “did not bring the rebirth of nations, but their devastation and destruction”. A conservative strand of largely older clergy also voiced fears about “red ruin”, but many younger priests were republican-minded.

Some of these generational tensions are captured in contemporary correspondence. At parish level, some clerics who sympathised with Sinn Féin could also condemn the IRA. While it is “futile to aspire to a precise figure” of priests who condemned IRA violence, denunciations were widely reported: between January 1919 and July 1921 there were 243 instances of reported comments made by a total of 149 priests and bishops.

Given that there were 3,700 priests in Ireland, this was a tiny fraction, a reminder that “a majority of the clergy simply tried to avoid becoming involved at all”. Of 380 priests in Cork, for example, only six were known to have given material support to the IRA.

Some two-thirds of reported denunciations came from senior clergy, but there was also much ambiguity about what was permissible for priests to say. Archbishop Gilmartin suggested that a priest could have views about politics but should not “take an aggressive part on either side, because we belong to you [the parishioners] and you are all belonging to us”.

But where did politics end and morality begin? The horror of sudden and unprovoked death was a frequent theme of sermons; there was a strong belief that individual deeds affected the moral status of the community.

The longer the conflict raged, however, the more the focus changed. A joint pastoral issued by the bishops in October 1920 focused almost exclusively on the horrors of British rule, “merely counselling self-restraint to its own people”. The first priestly fatality occurred when Fr Michael Griffin was killed in Galway in November 1920. Afterwards, Bishop Thomas O’Dea said this was the beginning of an attack on the church and religion.

Only one bishop, Daniel Cohalan of Cork, issued a decree of excommunication; his was upon anyone “who, within this diocese of Cork, shall organise or take part in ambushes or kidnapping, or shall otherwise be guilty of murder or attempted murder”. The point is wisely made that “the fact that Cohalan’s decree was greeted by silence on the part of his colleagues is even more significant than the decree itself”. In a private letter to the rector of the Irish College in Rome, a hotbed of republican-minded Irish priests, Sinn Féin’s Seán T O’Kelly denounced Cohalan as “a cowardly slave and traitor to Ireland”.

Statements from the Bureau of Military History suggest that priestly interaction with republicans was “part of a conversation with the flock” rather than involving “authoritative monologues”. While priests were occasionally able to prevent planned IRA ambushes, much depended on the prestige of the priests; there were numerous “psychological contests”. John Godley, the parish priest of Adrigole, Co Cork, saw his motorcar stolen and destroyed after a pulpit condemnation of the IRA.

IRA volunteers were rarely dissuaded by clerical denunciation, a stance summed up succinctly by Dan Breen: “we kept our own course”. They were more concerned that criticism could weaken the morale of supporters, but they also had support from the media; the Catholic Bulletin newspaper (more strident and republican than the Irish Catholic) did not hold back, for example, in excoriating Bishop Denis Kelly of Ross for his “slavish statements on our national aspirations”.

Nor were the flock or priests beyond taking on their hierarchy. When Bishop James Naughton of Killala was hearing confessions in Ballina, IRA man Stephen Donnelly argued with him for nearly two hours. “Worn out by these lengthy exchanges, Naughton eventually absolved Donnelly, giving proof to the Ballina company that they could expect forgiveness rather than support.”

Disagreement was also apparent in relation to what constituted a just war or how to define a revolt against tyranny. Both Bishop Cohalan and Walter McDonald, a professor of theology at Maynooth, rejected the right to use physical force on the grounds that Ireland was not a separate, sovereign state.

In contrast, Cork academic and influential lay Catholic Alfred O’Rahilly insisted there was a right to revolt based on “the natural right to self defence against an unjust invader”.

The plight of the Royal Irish Constabulary, because it was mostly composed of native Catholics, ensured that “priests did not abandon the idea that Catholics in the RIC belonged to the Irish Catholic community”.

Heffernan also pours cold water on the idea that clerics in any general sense saw the IRA campaign as sectarian; even priests who strongly condemned the IRA rarely raised the charge of sectarianism, and some priests condemned attacks on Protestant churches.

Overall, the most common type of republican-minded priest was a Sinn Féin rather than an IRA priest. There were numerous police reports of their activities as collectors for the Dáil loan, and their strong presence in Galway and Clare on SF constituency executives (45 priests held office in the SF party at constituency level in 1920).

They also served as judges in SF courts; trials in Kilfinane in Limerick, for example, were held in the parochial house and church sacristy, but much evidence also exists that presbyteries, religious houses and churches were used to store arms.

Curate Fr Michael McKenna in Mullagh, Co Clare was unusual in joining the IRA, but other priests refused to recognise the legitimacy of British courts. It was difficult, however, to secure convictions; the one priest charged with knowledge of an ambush was acquitted. They could provide legitimacy and moral reassurance by hearing confessions of men on the run and as brigade chaplains. Well known Capuchin priest Dominic O’Connor styled himself “brigade chaplain” to the Mid-Cork brigade of the IRA and told them to ignore excommunication threats.

Priests who absolved IRA men on the way to commit murder were essentially saying such killings were not murder as “Canon law and theology required that persons receiving the sacraments should at least have the intention of living lives that accorded with the precepts of morality”.

There was, however, the grey area of “conditional absolution”. Officially, this was a matter of preparing the men for death, “not of soothing consciences to make them ready to kill others”. In contrast, Stephen Donnelly experienced a Father Ted-esque moment after he was asked by a priest how many police he had shot; when he answered three, the priest responded: “You’re no bloody good if that’s all you have shot!”

Priests were also “skilled public relations managers”, capitalising on raids (the author uncovered 130 instances of priests’ houses being raided and 80 instances of intimidation and violence against priests, allegedly by crown forces) and arrests of their members to tell tales of sacrilege and desecration.

Heffernan says there was no concerted murder campaign against priests. But “after mid 1920 priests were exposed to interference by the Crown Forces to a higher degree than the general population”.

This book does not deal with the Civil War, but observes that, “for the conservatives, the foundation of the Irish Free State in 1922 was equivalent to the reaching of dry ground again”. Heffernan expertly chronicles the period at sea before that.

Diarmaid Ferriter is professor of modern Irish history at UCD. His latest book is A Nation and not a Rabble: The Irish Revolution, 1913-1923