Four irreconcilable perspectives on the Famine: The Great Irish Famine – A History in Four Lives

Review: This edition of Enda Delaney’s book does not break fresh ground in research, but it is riveting, insightful and pacy 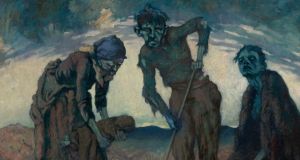 For more than 30 years Cecil Woodham-Smith’s haunting The Great Hunger: Ireland 1845-1849, from 1962, was a lone presence in the Famine firmament. Although often dismissed by historians for its emotionalism, The Great Hunger in many respects holds its own and remains a compelling read.

There was a dearth of publications before the 150th anniversary of the Famine, in the mid 1990s, but there has been a deluge since. To important works by Cormac Ó Gráda, Peter Gray, David Lloyd, David Nally, John Kelly, Ciarán Ó Muirchadha, James Donnelly, Breandán MacSuibhne, Christine Kinealy, Luke Gibbons, Chris Morash, Oona Frawley and Margaret Kelleher, for example, can be added the magisterial Atlas of the Great Irish Famine, edited by John Crowley, William J Smyth and Mike Murphy, which has expanded the field considerably.

As publications proliferate it is worth asking what their new contribution to knowledge is and whether they have a way of telling the story likely to engage new readers.

First published in 2012 as The Curse of Reason, this edition of Enda Delaney’s The Great Irish Famine: A History in Four Lives does not break fresh ground in research, but it is riveting, insightful and pacy, and, far from appearing tired, it invigorates standard historical methodology.

Individually, we know much about Charles Trevelyan (1807-86), the detested assistant secretary to the treasury in London, responsible for government relief in Ireland; the journalist John Mitchel (1815-75), seen as a rabid revolutionary; and John MacHale (1791-1881), the patriot archbishop of Tuam. Their contributions to the Famine, and other aspects of political, social and religious life, are extensively documented elsewhere. But in the case of Elizabeth Smith (1797-1885) it is only relatively recently that her life and work have come to light, through the publication of her diaries.

The opinionated and articulate mistress of Baltiboys House, in Co Wicklow, Smith, in her journal, tells the story of her personal life, interwoven with that of her tenants. Her diaries are a rich resource for the social historian, informative as they are about landlord-tenant relations during the period. Although ideologically unyielding, Smith was personally humane, thereby bucking the landlord stereotype, especially in her belief in the benefits of secular education for the Irish poor, making her unusually progressive for her time.

The anticipation that the four protagonists in the book would come together, to clash in some great ideological crescendo, is soon dispelled, but neither does the book atomise into separate parts. Paradoxically, part of its originality lies in the disconnect between its leading characters, in the sense that no two interests agreed on cause or solution.

Nor is this a traditional chronological account of the Famine; instead it is a way of contrasting the ideologies of the Catholic Church, the government, the landlords and the nationalist fourth estate. Far from falling short, given the limited space available to each character, the book’s narrative technique greatly surpasses standard history-through-biography expectations. It deftly segues from one protagonist to another, drawing out the opposing perspectives that characterised responses to the greatest demographic catastrophe of 19th-century Europe.

The perniciousness of the Victorian ideological apparatus is revealed in the righteousness of a government that believed the Famine was “a calamity sent by providence” to teach the Irish a much-needed lesson. The “moralist” view, that Ireland’s problems were due to the moral failings of Irish Catholics, formed the basis for the handling of the Famine. It followed that “relief must contain a penal and repulsive element” to prevent the growth of a dependency culture among an already indolent people. Trevelyan maintained that the Irish peasant worked less than six weeks of the year: two weeks planting, a week to 10 days digging, and two weeks cutting turf, with the rest of the time given to his own leisure. Elizabeth Smith did not disagree.

Of course, the Irish were no less ideological, just differently so. Their response to the providentialist view was to see the wrath of God not in the Famine but in “the greedy and cruel policy of England”. As Mitchel put it, “starving children cannot sit down to their scanty meal but they see the harpy-claw of England in their dish”.

Archbishop MacHale would not have argued with the will of God either, but his response diverged from the logic of classical political economic theory that insisted on noninterference in the market. Although historians differ as to quantities, the country continued to export enough to feed a sizeable portion of the suffering population. Had exportation been stopped, the extent of the crisis would have been less, to the extent that Mitchel declared Ireland “died of political economy”.

Although Protestant, the Smith family supported the new national-school system that radical Catholics deplored as undermining clerical authority. Archbishop MacHale saw their ilk, even when benevolent, as subverting the social, economic and religious rights of the Irish. And, of course, hardline landlords saw recent religious and emancipatory equality as deeply antipathetic to their interests.

Even within the landlord class, largely Protestant but also Catholic, there was little common ground, although all saw the need to modernise, by which they meant clear the land of lazy, backward tenants, so as to increase profits. More than a million people died in the Famine, and 1.5 million fled; by 1901 Ireland’s population had dropped from 8.2 million to 4.5 million.

Delaney’s book is a serious contribution to publications on the Famine, but there is one quibble: the visuals are handled in a pedestrian way, dropped into the centre of the book without rhyme or reason, as if they could have nothing to say for themselves.