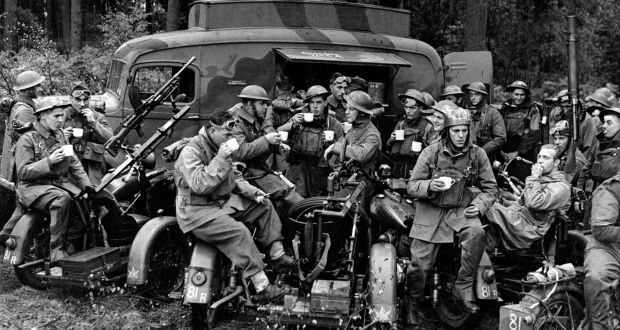 The 1st Canadian Reconnaissance Squadron, armed with motorcycle-mounted Bren and Lewis machine guns, having tea in an English wood during the Second World War. Photograph: PA Images via Getty Images

Book Title:
Fighting the People’s War: the British and the Commonwealth armies and the Second World War

Having experienced the recent series of commemorations connected to the First World War and also Ireland’s decade of commemorations, it is perhaps difficult to believe that yet another significant anniversary will occur this year. This September will mark the 80th anniversary of the beginning of the second World War and a programme of commemorations is already planned across Europe to mark that major event. The general public may well be forgiven for having become jaded with this cycle of commemoration and much of what appears in print will probably be overlooked amidst the general outpouring of new books on the second World War. This important new volume by Jonathan Fennell deserves not to be overlooked in that process.

All historians tend to herald their research as being unique and ground-breaking but this is especially true in this case. The title might suggest a workmanlike discussion of the operational history of the British army between 1939 and 1945, but this book actually offers much more. Based on a deep mining operation amid the available archives, this volume offers much new information and more importantly, it takes a new approach in dealing with the development of the British army and its role during the second World War. Alongside analysis of the major military campaigns, it offers a socio-political study of an army that played a crucial part in winning the war and also in shaping post-war Britain and the Commonwealth.

Fighting the People’s War provides a narrative account of the history of the British army from the 1930s. Addressing many of the issues of investment and doctrine, Fennell examines the condition of the army in the 1930s and then its wholescale expansion following its defeat in 1940 and the subsequent evacuation from Dunkirk. He then goes on to discuss the role and performance of the army in all theatres up to the close of the war in 1945. En route, he discusses the challenges faced by this massive expansion and discusses the equipping, training and deployment of these troops to various theatres, illustrating that the soldiers who fought in the North African deserts, the jungles of Burma, Italy and then mainland Europe had mostly been civilians just a short time before.

The role of Commonwealth forces is a major feature of this volume and Fennell charts the mobilisation of forces in Canada, Australia, New Zealand and Africa. Local forces would also be later mobilised in Burma and elsewhere. By discussing the motivations of these troops and also the political debates connected to their mobilisation in their home countries, Fennell shows that decisions were driven by personal and local contexts. For decades, the accepted narrative has been that all the actors in the British Empire and Commonwealth put their ‘shoulders to the wheel’ in a united effort to defeat the Axis powers. While this is true to some extent, this volume examines the differing attitudes and objectives among the various populations operating under the British remit. In Australia, for example, the main concern was curbing Japanese expansion in the Pacific - the German/European context was of secondary concern and many Australian MPs objected to sending troops to other theatres of the war. In South Africa, there was significant pro-German sentiment and some debate whether to become involved in the war at all.

This volume also does not shy away from other less-palatable truths within the British forces. The history of this conflict is often portrayed in an heroic format but Fennell has identified some problems with the standard narrative. He discusses morale and discipline problems, showing that the army was far from being the well-disciplined and cohesive force that we have been led to believe. For example, during the Italian campaign (1943-45) more than 13,000 British troops deserted – the equivalent a whole division. During the Normandy campaign of 1944, there were over 10,000 courts martial for desertion and other offences. In the Eastern theatre, some Indian troops joined the Japanese forces after capture. Indeed, morale issues became so serious that the reintroduction of the death penalty for serious offensives was debated in the British parliament. There is also discussion of statistics for “battle fatigue” and wider health issues, including the alarmingly high statistics for venereal disease within the army.

In research terms alone, this volume represents an important addition to the literature on the second World War. For example, Fennell analyses the censorship summaries developed during the war – a vast undertaking in itself based on the contents of more than 1.4 million letters. The final chapters of Fighting the People’s War discuss the role of the citizen soldier in the post-war world and also the army’s reputation, legacy and legitimacy as a national force. This is an important book and it deserves to become one of the standard texts on British and Commonwealth forces during this period. It also suggests new approaches that, if applied more widely, could deepen our understanding of the second World War and wider conflict during the 20th century.