Fifty years of ‘The Barracks’ 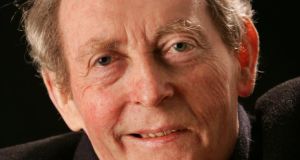 A Way of Seeing: 50 years of John McGahern in Print, takes place in Queen’s University Belfast on March 15th and 16th.

John McGahern’s first novel, The Barracks , was published 50 years ago, thus marking the arrival of one of Ireland’s most significant writers of the latter half of the20th century. The following year, 1964, saw the book awarded the prestigious Macauley Fellowship, which allowed McGahern to avail of a one-year sabbatical from his teaching duties in Scoil Eoin Baiste in Clontarf.

The critical response to the novel was largely enthusiastic. Anthony Burgess, in a review that appeared in the Observer on March 9th, 1963, noted that nobody “has caught so well the peculiar hopelessness of contemporary Ireland”. Kate O’Brien, writing in University Review , dwelt more on the artistic achievement of the young writer: “It is difficult to find words exact enough to express my admiration for this subtle, close-woven, tender, true, poetic work”. While Burgess was correct in underlining the sombre and depressing picture The Barracks paints of the Ireland of the 1960s, this is tempered to some extent by passages of rare beauty, which may explain why O’Brien found it “poetic”.

With the value of hindsight, it is possibly easier to assess why The Barracks was warmly embraced by the same Irish public that would react so negatively to McGahern’s second novel, The Dark , in 1965. Readers in 1963 were able to identify with the plight of the novel’s middle-aged heroine, Elizabeth Reegan, who discovers early in the narrative that she has cancer. In spite of her illness, she still has to look after her husband, a disgruntled Garda sergeant and veteran of the War of Independence, and the children from his first marriage. The opening lines capture the tedium of a life devoted to the care of others: “Mrs Reegan darned an old woollen sock as the February night came on, her head bent, catching the threads on the needle by the light of the fire, the daylight gone without her noticing”.

Right from the off, we are given access to the heroine’s most private thoughts. She is exhausted, but cannot afford to idle. Darning, cooking meals, washing and putting away clothes, her life is a series of tiring, dreary chores. Soon her husband returns, wet to the bone and in foul humour as a result of his latest altercation with his superior officer, Quirke. Reegan finds it galling to have to accept orders from this younger man whom he holds in contempt. He nostalgically remembers how during his youth he had been in charge of a flying column in the IRA. His fight for Irish freedom has resulted in disappointment and professional frustration and he pours out his bile to Elizabeth at every opportunity.

Uncomplainingly, Elizabeth listens to Reegan’s customary rant against Quirke and thinks about the lumps in her breast that will later necessitate a painful mastectomy, followed by a relapse into cancer, and eventually death. Before meeting her husband, while working as a nurse in London she had a brief liaison with a troubled doctor called Halliday who asked her on one occasion: “What the hell is all this living and dying about anyway, Elizabeth?” In a sense, all of McGahern’s work was an attempt to unravel Halliday’s existential quandary.

The remarkable achievement of The Barracks is the ability of a writer as young as McGahern was to get into the mind and body of a middle-aged woman. He lays bare her moments of joy and despair, her visceral attachment to a physical world which, when on the threshold of death, she sees in all its awesome glory for the first time. She can only utter “Jesus Christ” as she looks out on the woods across the lake, the rust of the beech trees, the withered reeds, a familiar scene that suddenly assumes a poignant beauty: “and now it was a wild call to life, life, life and life at any cost”.

There is a wonderful moment at the end of The Barracks when Garda Mullins, standing with his colleague Casey at a discreet distance from the funeral party, observes to himself: “It’s Elizabeth that’s being covered and not me and I’m able to stand in the sun and watch”. This is pure McGahern; it captures the understandable relief felt by people attending burials at the realisation that they at least are still above ground.

The 50th anniversary of the publication of The Barracks is a good opportunity to remind people of the existence of a novel that will in time come to be accepted as a true modern Irish classic.

Eamon Maher is among the participants at the conference A Way of Seeing: 50 years of John McGahern in Print , in Queen’s University Belfast on March 15th and 16th.