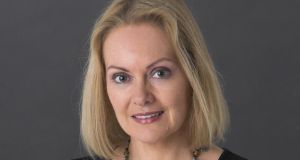 Helena Mulkerns: tries to show the humanity behind the wars in faraway lands

Ferenji, a word for foreigner from old Byzantium, appears in various guises in langugages across the world. Derived from the historical term “Franks”, or Europeans, it ranges from affectionate to pejorative, depending on how and where it is said.

It is a fitting title for Helena Mulkerns’s themed collection of short stories, depicting the lives of soldiers and civilians working in conflict and postconflict zones. Each of the narrators, many of whom make repeat appearances, are foreigners trying to help or document worlds that are vastly different from their own. An Irish lieutenant struggles to remain professional while dealing with a child ravaged by a landmine. A photographer can’t handle the chasm between life in Dublin and his experiences in the field. An Afghan woman who has spent years training abroad comes back to Kabul with her degrees to be treated like an animal.

Ferenji is an engaging and highly readable collection that seeks to show the humanity behind the wars in faraway lands that are often dismissed as “other”. Mixing real and fictional settings – Paris, Dublin, Kabul and the imaginary but all-too-real east African landscape of Zohmea – the author brings interesting aspects of the violence to life.

From Dublin, Mulkerns was an arts journalist in Paris and New York before joining UN peacekeeping missions in Central America, Africa and Afghanistan. The niece of the short-story writer Val Mulkerns, she has edited two literary anthologies and been shortlisted for the Pushcart Prize, Hennessy New Irish Writing and the Francis MacManus Short Story Competition.

Most of the stories in Ferenji have a naturalistic style, interspersed with a few experimental flourishes. Blue Tarpaulin is told from the perspective of the titular object: “I am a stretcher for a bleeding mine victim. I am the bed on which babies are born. I am the shroud in which the massacre victims are covered.” A brief but effective piece, it recalls the British author Harry Parker’s debut earlier this year, Anatomy of a Soldier.

Acacia Dreaming is a powerful short about groups of women gathering to pray for an end to the violence, “for something beyond truth – the biggest small word in the world – peace . . . as persistent and vulnerable as soft-winged moths that batter night after night at a window.”

Other stories, such as Image of the Day and The Package Man, offer snippets of ludicrous bureaucracy and immigrant lives in turmoil, although they ultimately feel unfinished.

Returning narrators offer mitigation, however, such as the memorable Tahmina, who, after standing up for a distressed Cambodian immigrant in a Paris post office, is viciously suppressed herself in a later story depicting an arms handover in Afghanistan. Scorned as a prostitute by the district administrator for not wearing a burka, Tahmina is supported by an Irish photographer, Emily, as they’re left stranded for hours in the baking midday sun in the aptly titled Dogs.

A Child Called Peace introduces us to Lieut Dara O’Neill, who vividly describes the trauma in war-torn Zohmea, where five-year-old Selam has stepped on a landmine: “Her mouth was half open, a tiny rosebud split open on one side.” Dara tries to escape the atrocity in The Thousand Mile Rule through a doomed affair that both parties cling to in the hope of some redemption or relief.

Operation Cat Lift, meanwhile, is a somewhat clunky allegory that sees Trini and Bren smuggle a cat on to a diplomatic jet in Africa while their colleagues can’t get visas.

More affecting is Bren’s earlier depiction, in The Biggest Liar, of his estrangement on landing in Dublin from Zohmea. As his sister picks him up in her new Land Rover, and brings him to Valumart, he is mesmerised: “He gazed up at the high, vaulted rafters, and then from side to side. It was like a cathedral . . . Rice, soups, eggs, biscuits for dogs.”

There are slippages here and there in this short collection, from a character noting “the Alanis Morissette irony of it” to a David Lynch-esque hotel, or a description of the process of taking a memorable war photo as “Wham bam thank you mam”.

Philippe’s shot of a young woman entering “a horror camp” on the Sudan-Ethiopia border has made the front page of an international edition. His reflections on the composition of a good war photo – from his sunbed at the Addis Hilton – call to mind last year’s short-story collection from the Hungarian photojournalist Sándor Jászberényi, The Devil Is a Black Dog.

Like Jászberényi, Mulkerns conjures up landscapes that are frightening and foreign: “Ahead, the heat was rippling up the view, twisting the horizon into a row of drunken amoebas.” From the “adamantine Afghan sky” to “a valley carpeted in brilliant green vegetation like an emerald lake”, there is the sense throughout that her narrators are at the coalface, dispatching their stories home.