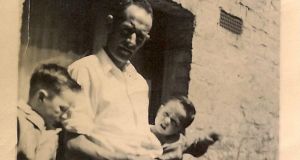 Thom Hickey with his father Wally and younger brother Gerry in their back yard in Church Street, Paddington, London in the late 1950s

Fathers and sons. Sons and fathers. Sons carry their fathers in their bloodstream, in their mannerisms and gestures and in the echoing halls of their memories. No matter what you do in life, no matter how radically you roam from where you started, you remain in some part of you (in more parts that you usually like to acknowledge) your father’s son.

The process of becoming a man might be defined as honouring and taking the best from the experiences of your father’s life while finding through your own experiences the kind of man and father you want to be yourself.

Coming to terms with your father, the son you were and are and the man and father you have become is the work of a lifetime. A story that’s always unfolding, always being rewritten as you learn more about the man you are and understand more about the man your father was. Sons, schooled by the abrasive tides of life, sometimes learn to have a certain humility about the easy certainties of their youth as to who their father was and what made him that way. It’s easy to be a father until you become one.

Sons writing about fathers is one of the great themes of all literature and songwriting because that story is always current, always unfolding, always full to the brim with all that is human in all its bloody and terrible glory. No two stories of fathers and sons are the same, though most will recognise something of themselves in every story.

Here’s a cry from the soul. Paul Simon’s Maybe I Think Too Much from his aptly-titled Hearts And Bones record. Fathers and Sons – Hearts and Bones, Hearts and Bones. Sons never know when they will need to call for their fathers to appear in their dreams.

“They say the left side of the brain dominates the right
And the right side has to labour through the long and speechless night
In the night my father came and held me to his chest.
He said there’s not much more that you can do
Go home and get some rest.”

The song about fathers and sons that grips my heart every time I hear it and which calls to me in the middle of the night is John Gorka’s The Mercy Of The Wheels. Forgive the initially muffled sound.

I miss my father. My Dad.

I miss the smell of Old Holborn tobacco as he smoked one of his thin, roll-your-own cigarettes.

I miss the days of childhood when I would buy him a pouch of Old Holborn for Father’s Day.

I miss getting up in the middle of the night with him to hear crackly radio commentaries on Muhammad Ali fights.

I miss the early Sunday mornings when we walked to a church two parishes away because he had been advised to walk a lot after his heart attack.

I miss hearing him roar home Lester Piggott as he brought the Vincent O’Brien horse into the lead in the Derby with half a furlong to go!

John Gorka sings The Mercy of the Wheels

Paul Simon sings Think Too Much

I miss hearing him say “There’ll never be another like him” as Jimmy Greaves scored another nonchalant goal for Spurs.

I miss hearing him say “That was a complete waste of electricity” as he glanced at the TV screen as some worthy drama concluded.

I miss sharing a pot of very, very strong tea with him well before six o’clock in the morning – because as anyone with any sense knew the best of the day was gone before most people bothered to open an eye.

I miss sitting with him in easeful silence.

I miss his indulgence in Fry’s Chocolate Cream bars.

I miss him saying “You’ll be fine so ...” whenever I had to face a daunting new challenge in life.

I miss him calling out the names of the men who worked with him on the building sites – Toher and Boucher and O’Rahilly with me double-checking the spellings as we filled out (creatively) the time sheets accounting for every hour of effort in the working week.

I miss watching him expertly navigating his way to a greenfield site not marked on any map to start a new job and then watching him get hopelessly lost a mile from home on a shopping trip.

I miss watching his delight as David Carradine in the TV show Kung Fu, unarmed, took on another gang of armed swaggering bullies and reduced them to whimpers in a few moments – “You watch, he’ll be catching bullets next”.

I miss hearing his wholly unexpected but wholly accurate estimation of Bruce Springsteen’s cultural importance when seeing him featured on a news special when he first came to England: “He’ll never be Elvis”.

I miss the way he remained a proud Tipperary man and Irishman despite living for more than 40 years in England.

I miss his quiet certainty that there was an afterlife – a world where fathers and sons divided by death could meet again.

I regret not being able to introduce him to the beautiful woman who, amazingly, wanted to be and became my wife.

I regret not watching him watch my daughter and my son grow up into their glorious selves.

I regret not watching him enjoying the pleasures of retirement and old age.

I miss the shyness of his smile.

I miss the sound of his voice.

I miss the touch of his leathery hands.

I miss the way he swept his left hand back across his thinning scalp when he was tired (exactly as I do now).

I miss the sound of my name when he said it.

I miss my Dad.

My Dad lies in the green pastures of his beloved Tipperary now under the sheltering slopes of Slievenamon (he would never have forgiven me had he been buried anywhere else!) You can almost hear this song echoing in the silence all around him.

I walked many roads with my father. I’ve walked many miles without him by my side now (though I sometimes feel his presence). I hope I have many miles to walk until I join him again. As I walk I will lean on him as I face the twists, turns and trip hazards ahead, accompanied by the words of Seamus Heaney:

“Dangerous pavements … But this year I face the ice with my father’s stick”.

Thom Hickey blogs about music and popular culture at theimmortaljukebox.com