Quitting a well-paid job as a poker writer was a gamble, but Dublin’s literary scene, secret places and historic streetscapes and a move to west Cork inspired The Book of Learning 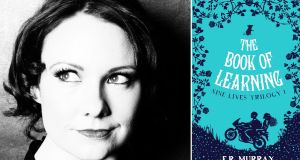 ER Murray: I found that my new city was invaluable for my writing. My Lower Hatch Street apartment transformed into 23 Mercury Lane, a Georgian house full of mystery and unusual events. The Botanic Gardens morphed into the secret Headquarters for the Order of Nine Lives and its villainous judge

It wasn’t until moving to Ireland that I realised being a writer was a real possibility; that it was an actual profession, and something I could aim for. Books were my first love and have always been my sanctuary, and I always wrote as a child. But growing up in 1980s Cleveland in the north of England during the Thatcher years, writing seemed such an elitist and impossible thing to do. Writers were wonderful creatures, but they were mystical beings from privileged backgrounds, not inner-city council estates where you were told that if you aimed high and really fought your corner, you might be able to find “a job of some description”.

After putting myself through university – I was the first in the family to go – I tried a variety of careers. Teaching, business coach and trainer, and eventually online poker writing; I enjoyed success in all, but never felt satisfied. I moved countries and positions, always earning promotion and more money, and in 2008 I was headhunted for a job in Dublin – lead writer for the world’s biggest online poker room. I moved from Spain to Ireland at the time the recession had just hit. I had more money than ever before, while the country was at its lowest ebb. And yet, despite the privileged position I was in, that familiar feeling of discontent crept back.

This is when the writing really started. I’d been playing around with some short fiction and poetry, with a degree of success. Pieces started getting accepted for various literary journals and shortlisted in competitions, including the Francis McManus Short Story Competition, and I realised that this was something that brought true satisfaction to my day. I attended some Inkwell workshops, met Vanessa O’Loughlin (who introduced me to my agent, Sallyanne Sweeney), and the rest is history. Fast forward a few years and I now have two book deals. My first book, The Book of Learning, is on the shelves, and three more are on their way.

The Book of Learning is about 12-year-old Ebony Smart. After the death of her beloved grandpa, Ebony’s world is turned upside down. Sent to Dublin to live with an aunt she didn’t know existed, she soon discovers that her new home, 23 Mercury Lane, is full of secrets. Learning that she is part of an ancient order of people who have the power to reincarnate, Ebony quickly discovers that a terrible evil threatens their existence. With just her pet rat, Winston, and a mysterious book to help her, she must figure out why her people are disappearing and how to save their souls, including her own, before time runs out …

When I started writing The Book of Learning, Book 1 of my Nine Lives Trilogy for 8-12-year-olds, I was still reasonably new to Dublin and infatuated with exploring this beautiful, friendly city. The parks, museums, theatres, cathedrals: there was so much to see. And with all the festivals and literary events on my doorstep, I was truly spoiled. As I immersed myself in my new surroundings and its writing community, the characters of Ebony Smart and Icarus Bean – who had been lingering in my head for some time – became so noisy and infuriating, that I had to start writing about them.

I didn’t exactly intend to write children’s and young adult fiction. All my short stories and poetry were for an adult audience, and I just wanted to write a book that I would enjoy reading. However, I’ve always had a deep love and respect for children’s literature, from picture books to novels. They play such an important role in a person’s development and yet they are often overlooked. Thankfully, Ireland has a deep-rooted respect for storytelling, and we have lots of amazing advocates for children’s books and writers here, including Children’s Books Ireland and the Laureate na nÓg. As for the children’s writers themselves, they form a close-knit, warm, and supportive community. It’s a really exciting time to be writing for children and young adults in Ireland; there’s still a way to go, but children’s books and writers are starting to get the recognition they deserve.

My own love for children’s literature may be because books were my one staple; I spent some time in foster care as a child and books were the one thing I could rely on. Or perhaps it stems from experiencing first hand as a primary school teacher how much books can affect young readers and bring joy to their day. Whatever the reason, writing for children and young adults felt right. I’ve heard Louise O’Neill discuss how she feels like she’s channelling her books when she’s writing. My experience isn’t quite the same, but I know exactly what she means; my characters and environment certainly led the way.

When you’re writing about fantastical worlds, the details must be realistic so the reader will believe in your characters and your settings. I soon realised that Dublin’s hideaways and historical buildings suited my storyline and characters perfectly. Following in the footsteps of Irish authors such as Derek Landy, Alan Early and Ruth Frances Long, I found that my new city was invaluable for my writing. My Lower Hatch Street apartment transformed into 23 Mercury Lane, a Georgian house full of mystery and unusual events. The Botanic Gardens morphed into the secret Headquarters for the Order of Nine Lives and its villainous judge. The pond in St Stephen’s Green became a magical underground lair, and other landmark buildings like the National Library and the Natural History Museum provided the perfect backdrop for many weird and wonderful scenes.

But this was only half of the story solved. I’d always planned for The Book of Learning to be set in two different locations. In 2010, I was considering taking a career break to concentrate on my writing. I felt like I was close to my aim of getting published, but I needed to dedicate more time to my craft. I visited Schull in west Cork for the first time in the February and fell in love with the place. I returned to Dublin and did what everyone says not to do: I handed in my notice and moved to west Cork that December. Everyone thought I was crazy. I was walking out of the best-paid job I’d ever had, without any guarantees. The only person who truly believed in me was Mick O’Callaghan, a friend I’d met in west Cork; it will come as no surprise when I tell you that we’re celebrating our fourth wedding anniversary this year.

West Cork provided the ideal second backdrop that I needed for The Book of Learning – and even when the rejections came flooding in and my savings ran out, I didn’t once question my decision to move there to write. However, I decided – like Louise O’Neill in Asking For It and Sarah Webb’s new Songbird Café Girls series – to create a fictional village, rather than use an actual place. West Cork is the first place I’ve called home, and it’s the warmth and strong sense of community that I wanted to portray. However, some localities and events are real; Gallows Island is based on a mixture of Long Island and Cape Clear. Gun Point is the name of a real spot (though I have moved it geographically), and the channel is my version of Roaring Water Bay. There’s a scene in my book that involves a stormy boat trip, and this is based on real events; while I was visiting Cape Clear, my husband and I were caught in bad weather returning home, only I exaggerated events to make them much more exciting.

Book 2 of the Nine Lives Trilogy is out in September 2016, but my next novel, Caramel Hearts, is due in March 2016 (Alma Books). It’s for young adults this time, and it is set in the north east of England. The story follows the life of a teenage girl with an alcoholic mum. Although it isn’t set in Ireland, it was written here, and without the thriving Irish writing community that has welcomed me, I honestly believe it would never have existed. A career in writing isn’t without its challenges; working with two separate publishers means lots of tight deadlines, and I still have to work full-time to pay the bills – but I can’t think of a better place to be situated. Ireland really does have a deep-rooted respect for the arts, and for children’s literature, which is something to be championed and appreciated.