Eoin McNamee on Patricia Curran’s murder: still haunting after all these years

Irish Times Book Club: the author reflects on his fascination with a murder victim and her ‘gothic’ family that began when he was eight and has fuelled his outstanding Blue trilogy 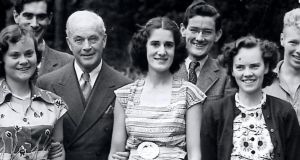 Patricia Curran, centre, in March 1952: “Innocence lost in the noir world of white mischief, corruption and transgressive sex. Haunted and haunting. As the case against her alleged killer was built, a parallel case seemed to be come into existence against the 19-year-old. That she was wilful, promiscuous, consorted with older men. The sly narrative that takes hold in cases like this, that somehow the victim had brought the whole thing on herself”

The first time I saw her name. The first time I saw her face. I’m eight years old and I open a drawer in the hot press of a childhood home. The drawer is lined with an old newspaper, yellowed and brittle. A 1952 Belfast Telegraph. The headline: Judge’s Daughter Slain. A photograph of the dead girl below the headline. Patricia Curran, 19, wearing pearls and a cowl-knit dress. You note the high cheek bones, the sensuous, down-turned mouth. But it is the eyes that draw you. The face is dominated by the shadow of them, the mesmeric void. Thirty years later a man whistling a tune in the shadow of the gallows gave me the title and the noir texture of a book about the murder. The Blue Tango.

Patricia’s body was found on the driveway of the Curran family home in Whiteabbey. She had been stabbed 37 times. From the start the whole thing stank to high heaven. Judge Lancelot Curran would not allow members of the family to be interrogated, nor the house to be searched. Suspicious circumstances, evasions and outright lies piled up. It would appear that Curran covered up the murder of his own daughter. It would also appear that he colluded in the conviction of an innocent man for the murder, a man who would have been hanged were it not for some collusive sleight of hand from his colleagues in the bar library.

Lancelot Curran was a legal high-flier, attorney general at 36, Orange stalwart and high court judge. He was also a gambler, up to his neck in debt. His wife, Doris, was at odds with her daughter. Desmond Curran, Patricia’s brother, was a barrister and proselytiser for Moral Rearnament, an influential Christian movement which demanded that sinners be pursued with “loving relentlessness”.

But that isn’t all there is to the Currans. There is always something heightened about them, a reaching for the gothic. Desmond, Patricia’s brother, jumped ship after her murder, became a Catholic priest and served in a South African township for four decades. Doris was admitted to a mental hospital following her daughter’s murder and remained there until her death. But it wouldn’t be Doris’s first foray into the far precincts of the mind – she was brought up in Broadmoor Hospital for the criminally insane where her father was superintendant. There is always an echo of madness, the distant voices of the fiendish and the damned when it comes to Doris.

And the judge himself? Nine years after his daughter’s death Lance Curran went on to become Ireland’s last hanging judge. In 1961 he convicted Robert McGladdery from Newry and sentenced him to death for the murder of 19-year-old Pearl Gamble. The evidence was circumstantial and McGladdery maintained his innocence but Curran weighed in with a well-timed and cynical steer to the jury and McGladdery was hanged in Crumlin Road gaol that December. That story became Orchid Blue, the second book of an unintended trilogy.

It seemed that Lance Curran provided the unity between three books, three murders – his dark theatre of corruption and malice echoing the history of my own family. In 1949 Curran, then a young QC, prosecuted Robert Taylor for the murder of Mary McGowan. Taylor an imp of malice caught red-handed, but the wink and the nod was given. Taylor was one of the chosen people and he wasn’t going to hang for the murder of a Catholic. Curran was righteous – fought brilliantly to convict Taylor – but the fix was in, and Taylor, convicted of murder, was allowed to walk free on a technicality.

Blue Is the Night was supposed to be about this case. How the idealist is confronted with a corrupt system and destroyed by it. How desire consumes men. The thoughts that ran through Lance Curran’s mind as he found himself in a Roman basilica at his son’s ordination. He had played his hand and now collected his bitter winnings – his daughter murdered, his wife in an asylum, his son a papish priest. A man trapped in his own deceit and folly.

And yet…Patricia…that face looking out from the yellowed newspaper. Innocence lost in the noir world of white mischief, corruption and transgressive sex. Haunted and haunting. As the case against her alleged killer was built, a parallel case seemed to be come into existence against the 19-year-old. That she was wilful, promiscuous, consorted with older men. The sly narrative that takes hold in cases like this, that somehow the victim had brought the whole thing on herself.

Did Doris hold the answers? The mother who was described as “nervy”, as “a cat on a hot tin roof”? The woman who had to climb through a rear bedroom window to access the house while her husband gambled in the Reform club? A paranoid schizophrenic would be capable of murdering a child in the belief that they were someone else, some devil sent to torment then. Delusions of grandeur, paranoia, auditory hallucinations – the symptoms a lunatic’s charter. Years after the murder a massive bloodstain was uncovered on the floor of Patricia’s bedroom. Circumstances pointed to her not being killed at the location where her body was discovered. Was it Doris?

It was never meant to be a trilogy. Each book stands on its own. Nor does it set out to name the killer. In the end you find yourself deeper in the mystery. In the end the whole thing becomes about that photograph of Patricia, those eyes. The sombre, violated gaze. Haunted and haunting.

Blue is the Night by Eoin McNamee is published by Faber, priced £7.99

Next week: a Q&A with the author