Enda Kenny doesn’t care about our culture. Thank God the IDA does

No Taoiseach since Éamon de Valera has been so culturally destructive. IDA Ireland understands far better the importance of our global image as a creative hub 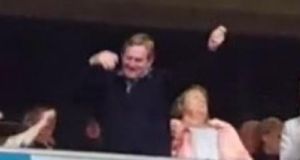 Bruce Springsteen’s Croke Park concert: short of impounding Enda Kenny’s air guitar and holding it to ransom, it seems impossible to force the Taoiseach to grasp the value of the arts

Short of impounding his air guitar and holding it to ransom, it seems impossible to force Enda Kenny to grasp the value of the arts. It does not seem unfair to suggest, indeed, that he is actively hostile to the Irish cultural world in general. No Taoiseach since Éamon de Valera has been so destructive.

Kenny’s effective abolition of the department of arts and heritage, now reduced to a bizarre appendage to the Department of Rural Affairs, is for him a crowning achievement. (Perhaps the department could be called the Plough and the Stars.) The infrastructure created under Michael D Higgins between 1993 and 1997, when Ireland got a proper department of state that brought together arts, culture, heritage, the Irish language, broadcasting and communications, has now, at last, been completely undone.

So let me suggest, only partly in facetious mode, a thought experiment: why not place the arts and culture under the industrial development authority? IDA Ireland has a far better understanding of the importance of Ireland’s global image as a hub of creativity than the Taoiseach does. There is, indeed, an increasingly surreal disjunction between the language of economic development in Ireland on the one side and the reality of an impoverished cultural infrastructure on the other. People in the hard-edged business of competing for foreign direct investment know the value of soft power; government doesn’t.

The IDA cares about the idea of a creative Ireland because the people it is wooing care. Just this week Amazon announced 500 new high-end tech jobs for Dublin. On Morning Ireland on Monday, Jeff Caselden of Amazon Data Services was asked why the corporation had chosen Ireland. “First and foremost”, he said, “is the access to the talent that we’re able to get in this country. Ireland’s got a very creative culture.” He went on to talk about infrastructure and growth, but he was clear that the primary attraction of Ireland is its “very creative culture”.

This notion of Ireland’s creative culture is going to become an ever more vital national interest. Over the next decade the big attraction for most multinational investors – Ireland’s facilitation of global tax avoidance – is likely to wane as the international revolt against such practices gathers pace. We’ll be competing on the idea that we have an imaginative, creative, distinctive culture. Culture doesn’t just mean the arts, of course: it also embraces scientific and social innovation. But the arts are a huge part. They’re the springs that feed the flow of ideas, especially the awkward and contrary ideas without which nothing new can be made real.

Yet, by European standards, the infrastructure for supporting the arts in Ireland is not even third class. The fairest comparison is to look at cultural spending as a proportion not of gross domestic product (a dodgy measure in Ireland) but of total public expenditure. On this measure Ireland’s official outlay is staggeringly low. The Council of Europe’s Compendium project gives the median share of cultural spending in 24 countries as 1.54 per cent. Ireland’s is 0.3 per cent – a fifth of the median. It’s not just that this is much lower than in Germany or Sweden: it’s lower than any other European country – lower even than Azerbaijan. The only country that comes even close to being as bad is Greece, with its imploding economy.

This is perverse in itself, but it becomes positively bizarre if you listen to IDA Ireland. In March, for example, the IDA brought an Irish theatre company, Macnas, to a music festival in the US, South by Southwest, in Austin, Texas. Why on earth is the IDA getting into the business of arts promotion? Martin Shanahan, its chief executive, explained: “Ireland has a strong creative culture that attracts organisations from all over the world. South by Southwest, with its celebration of creativity, is the perfect place to showcase the innovation and talent that differentiates Ireland internationally.”

Look at the IDA website and the way it pitches parts of Ireland as attractive locations for investment. Letterkenny: “rich tradition in literature, culture and the arts”. Dundalk: “rich heritage and passion for the arts”. The Midlands: “rich tradition of literature, culture, arts and music”. And so on. And the IDA is absolutely right. It gets the irony that the corporations creating global cultural homogenisation find that homogenisation dull and unproductive and are desperate for difference. It knows, as the Taoiseach does not, that differentiating Ireland is a vital national interest and that those who serve that best are artists. They don’t set out to serve it: they achieve it by being good at what they do.

Only the pragmatic technocrats understand that words like culture, creativity and innovation are more than seasonings to be sprinkled on otherwise indigestible speeches.