Review: While the world was at war, Ireland was catapulted back to a ‘horse-and-cart economy’ 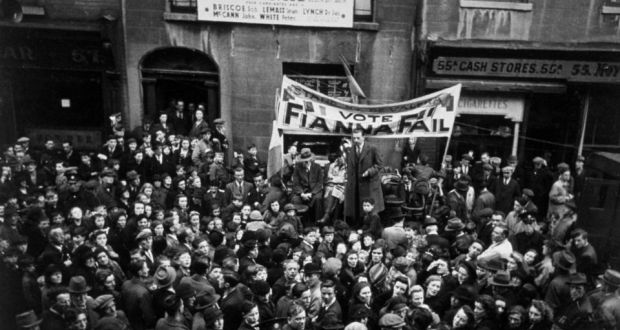 ‘Economic dictator’: Seán Lemass, above, addressing a crowd in Dublin in 1943, probably had more control over the economy during the Emergency than when he became taoiseach. Photograph: Haywood Magee/Getty Images

Given that the second World War was probably the deepest economic crisis in the State since independence, particularly with regard to food and energy supplies, Bryce Evans’s new book raises a number of important issues, which go far beyond the traditional focus within the literature on diplomacy, neutrality and security.

The book sets out to provide “a clear summary of Ireland’s economic survival at the time as well as an indispensable overview of every published work on Ireland during the second World War”. While it does not comprehensively achieve those ambitious objectives, it makes a convincing case that the war was the high watermark, after independence, of centralised State intervention in the economic sphere.

While the existential security threat to Ireland never fully materialised, the implications of the war created arguably the most challenging economic circumstances faced by Irish society since the formation of the State (including the recent crash), due to the threat to food and energy security.

With Ireland’s policy of neutrality (albeit as an un-neutral neutral), Anglo-Irish relations took a turn for the worse, and Britain imposed major restrictions on Irish trade from January 1941. This starkly revealed Irish trade dependence on Britain. The situation was compounded by a general lack of raw materials, most notably coal.

Abnormal trading conditions prior to the war, Evans writes, had already given rise to the establishment of the emergency supplies branch within the department of industry and commerce, in September 1938, in Seán Lemass’s ministerial backyard. Its powers were extended early in the war, when Lemass became the new minister for supplies, subsequently controlling prices, profits and the storage and movement of goods.

This dramatically increased his influence as the core figure in government in economic matters. He was instrumental, for example, in the establishment of Irish Shipping, in March 1941, which predominantly focused on importing wheat. Evans has revisited this key phase in Lemass’s career, which he covered in his excellent critical biography, the best yet written. The subtitle of that book, Seán Lemass: Economic Dictator, was most apt during the Emergency when he probably had more control over the economy than when he became taoiseach. Yet Evans argues that under Lemass’s guidance, the department of supplies performed somewhat more unevenly than generally supposed, with its undoubted dynamism offset by ineptitude and failure.

The first chapter takes a top-down perspective on the department and “Lemass’s stewardship of the Emergency economy”, as the severity of wartime austerity deepened. Evans concludes Lemass was g caught by surprise and had not prepared and stockpiled vital supplies before and in the early years of the war. This harsh judgment on both Lemass and his wartime department certainly challenges the received wisdom.

The second chapter covers the increased reach and capacity as employment in the department was cranked up from 169 staff in 1940 to 1,069 in 1944, including inspectors (largely male) who became the public face of the operation, policing everything from cycles and tyres, to gas and electricity supplies. A smaller female contingent handled areas less appropriate for male policing, including, for example, the “irregular sale of ladies’ underclothing”.

This intrusive micromanagement, rationing and control of sugar, tea, candles, fuel, tobacco, spirits etc gave rise to a lively black market counterculture. Moreover, supply differentials further accelerated cross-Border smuggling “as a reciprocal trade developed in commodities restricted in one territory but more readily available in the other”. Evans has ably documented how the population circumnavigated the best efforts the department of supplies to curtail the black market and smuggling.

Despite broad opposition to further State encroachment in the public and private spheres, the Catholic church backed the efforts of the State to deal with the crisis. But the officials of the department viewed themselves, in Evans’s words, as “the real policemen of the Emergency moral economy”.

Evans inverts EP Thompson’s bottom-up concept of a moral economy to a top-down variant constructed, he argues, by the State to counter profiteering and the operation of the black market.

The book successfully documents the ambivalent reception to these new State directives. Yet despite the unprecedented degree of State intervention – including wage controls, rationing, expansion of the Army, emigration embargoes, compulsory tillage and turf-harvesting schemes – this public opposition to supply directives should not be overexaggerated; broad support for the government’s handling of the emergency economy are implicit in the victories of the Fianna Fáil party in two general elections during the war. This suggests recalcitrant resistance to State mobilisation in the economic sphere was limited and localised.

A chapter contrasting conditions in rural and urban Ireland reveals rural dwellers had advantageous access to food supplies – from fields, gardens and through foraging for nuts and berries – while the black market operated most effectively in providing alternative supplies in urban contexts.

The finest chapter in the book deals with compulsory tillage, which “formed the centrepiece of the Irish government’s control on agriculture”. Although the quota demands for tillage were somewhat lighter than in Northern Ireland for most of the war (albeit with far greater adoption of tractors for this purpose north of the Border), the back-breaking and less profitable work of ploughing by horse was highly unpopular among farmers.

Yet for all the huff and puff, prevarication and court cases, the land under tillage in the State, Evans writes, increased from a five-year average of just under one million acres between 1935 and 1939 to 1.5million between 1940 and 1944.

Market restrictions and shortages during the Emergency catapulted Ireland back to a “horse-and-cart economy”, according to Evans. But much of the prewar economy, notably in agriculture (by far the dominant sector in terms of employment), was still very much of a “horse-and cart” nature. Horse power still ruled in much of rural Ireland.

If the chapter on the church could have been left out, the book might have benefited in economic terms with a chapter focusing on the Irish industrial sector, where supply shortages proved far more problematic than in agriculture. Moreover, in illustrating what was going on in the service economy, for example, Evans might have drawn more upon Peter Rigney’s excellent study of the Irish train system and the Emergency, highly revealing on the wartime economy.

But these are minor quibbles. The book has opened up important vistas in terms of the subaltern experience of the Emergency and the department of supplies. Evans writes well and this book will reach a wide audience and increase interest and research. It is nicely produced by Manchester University Press but, as with many British publishing houses, the hardback price is excessive, driving readers of fine books like this back into Plato’s cave.