Edward Power, a poet whose work was marked by gentleness, tenderness and love 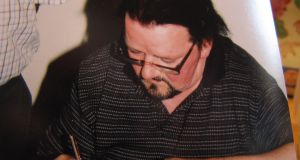 Edward Power: towards the end of his life he wrote several poems, one of which demonstrates his great courage, in facing up to his coming death

The poet Edward Power died at the age of 68 on  October 22nd, 2019, at the family home, surrounded by family and friends. He was born on the small farm at Kilcraggan, near Mooncoin, Co. Kilkenny, in 1951. At the age of five, two events occurred which would in many ways shape the rest of his life. He set them down in a poem:

Ghost
It came along the hospital ward
Calling my name when I was five
And not expected to survive.
The terrible dent on my temple.
I’d have died to get away from it.
Yelled and wept till they moved my bed
To the west end of the ward.
Someone playing a trick on you, they said
And I believed them. For forty years
I wondered: why should anyone want
To scare, pretend to haunt,
A boy with a broken head?

Alone one day on the prairie
Of middle age,
It came to me
Shadowy, naked
Except for the ragged white lie
They’d wrapped it in,
Fearsome as the billy-black horse
That stove my temple in,
And I saw that I was the only one who’d seen
The cowled grey shape that called my name
When I was five
And not expected to survive.

The kick he received from a horse left a permanent, deep scar on his forehead. It was the precursor of the many accidents which would befall him throughout his life. Despite the unique career he carved out for himself, there was always a sense that he was at the mercy of something beyond his control. He never forgot the ghost which appeared to him in the hospital. The poetry and fiction he wrote would always be haunted, not least by the deeply poignant question with which he ends the first stanza of this poem.

His talent for writing showed itself early, when he had a piece accepted for the English comic, Victor. A poem was highly praised by the eminent TV personality Eamon Andrews. Many poems were taken by David Marcus for the Irish Press New Irish Writing. Contact with the Carrick-on-Suir poet Michael Coady led to lifelong friendship, and joint trips into the poetry world, in particular to the Listowel Writers’ Festival.

Power worked at a local paper factory (where his arm got caught in one of the machines). He worked for a while in London, living on Narcissus Road in Hampstead. He kept the letters his father wrote to him while he was away, and saved them for the rest of his life. On his return to Ireland he worked as a journalist. He edited and produced the four issues of the literary magazine Riverine in the late 1980s. Later he ran his own publishing imprint Rectory Press, producing some 14 titles between 2002 and 2005. Their subjects matter included poetry, memoir and history.

The quality of his own poetry was widely recognized. Many poems were published in magazines and journals. He won the Listowel Prize for a full collection in 2003. Bad luck would dog his effort to publish this collection. Although versions were accepted by two publishers, they would go out of business before managing to bring the book out. Another publisher would change their mind at the last minute.

Eventually he brought out two books with his own Rectory Press, the collection Where The Sun Drowned in 2004, and John Condon in 2005, a sequence of short poems about the youngest Allied soldier to die in the First World War. He also wrote short stories, novellas and a novel.

Power’s poems were written with gentleness, tenderness and love. A typical poem might complicate and subvert the language with puns and composite words. There would be an unexpected leap of imagination, a pervasive sense of the present being haunted by memory and history, of love being haunted by loss. There would be lines of heartbreaking lyricism. Power was a naturally instinctive poet; he was also naturally talented in his literary judgements concerning work in progress - his own or other writers’. He was a much valued mentor, editor, sounding board for many poets. Some of his last poems make mention of the English poet John Clare, with whose work and life Power had many affinities. He was particularly drawn to the suffering of the soldier poets of the first World War, in which his grandfather had fought.

Flanders Poppy
My root sucks the red
Memory of a shot boy’s lips,
Colour of the life he spilled
Face down among the dead.
He’s skull now, grave and snapshot.
Earth’s replaced the marrow of his bones.
Even the grief has passed on.
But I kept the breath of his last kiss,
And now my petals blow, still paint
This century of war and peace,
And great and little griefs.
I die in everyone’s lapel,
For boys who walked among
Great blooms of shellburst,
Vainly came with whispers
Of a kiss still about their lips,
And khaki swagger all about their hips,
And dangling cigarettes,
Found one brief love or loneliness
Among my millioned heads
And lay with it,
And then lay down with death.

On  October 25th, Edward Power’s funeral service took place at St Paul’s Church of Ireland, Piltown, Co Kilkenny, with burial in the adjoining churchyard and a grave of his own choosing. The switch he made from Catholicism was very important to him: he embraced Protestantism in many different ways. Towards the end of his life he wrote several poems, one of which demonstrates his great courage, in facing up to his coming death, and in being able to write about it. The poem also displays the depth of his faith.

I want to rest where I have prayed
the deepest that my soul allowed;
where plaques upon the walls
within St Paul’s have made me proud
with a pride that is no sin.
Tombe, Gethin, and all the others:
I have marched away with them
in song and poem, pictured mothers
try the pockets of sad Sunday suits
for some least, forgotten thing.

My grave is first on the left
of the aisle between rows
of memorial stones tilted
forward like Anglicans at prayer
or backrests for the memory of souls
that warmed the wood before me in St Paul’s;
old epitaphs made intermittently new
by the Burial of the Dead.

It’s an odd things to look on your own grave,
undug, unmarked, un-epitaphed
under a mean skullcap of grass.
Banter with the warden raises a laugh.

Mark Roper is a fellow poet

It’s hard to watch MacGowan in this state, wheezing and hissing from his wheelchair