Ebooks: Short fiction treats that are perfect for travelling

Round-up: Digital publishers have been quick to spot the potential in brief reads that help shorten journeys 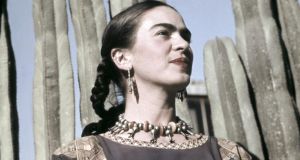 Betrayed: Frida Kahlo is the subject of Nuala Ní Chonchúir’s The Egg Pyramid in Flash Fiction

Summer is a bumper time for book publishers, of both the traditional and the digital kind. As people head off on holidays they pack their paperbacks or load digital books on to their ereaders, eager to catch up with the year’s bestsellers. Before hitting the beach with a blockbuster, however, there is travelling to be done, and this is where short reads can be ideal.

Digital publishers were quick to spot the potential in this form of literary concision, and Amazon’s Kindle Singles led the way, with traditional publishers following suit. In the US some houses, such as Penguin Random House and HarperCollins, have even developed partnerships with companies such as Amtrak to distribute digital short fiction and essays to passengers as they travel.

Honey, We Forgot the Kids! by Paul Ham and Bernie Brown (Kindle Single, £1.99) will surely lure a swathe of holiday readers with its playful title. “Wishful thinking”, parents will secretly murmur to themselves as they swipe the book open. But Ham and Brown’s extended essay on the challenges of modern parenting is a serious proposition, “a defense of children in a family-unfriendly world”.

“Many unhappy families are alike,” they observe, but they counter Tolstoy with contemporary sociological analysis: “Many are unhappy for the same reasons.” Ham and Brown argue that society is failing the family, neglecting the needs of children in the face of capitalist imperatives. Governments don’t adequately support working parents, and working parents don’t adequately consider what is best for the children.

The ambiguous legacy of feminism gets a whole chapter; for “today’s ‘bad feminists’,” they write, “motherhood is a lapse to which one confesses in guilt-ridden essays”.

Despite its sobering conclusions, Honey We Forgot the Kids! is written in a breezy, readable style. The authors are American but draw their testimony from across the western world, and as Ireland grapples with issues of parental leave and the rights of the child their analysis is more than pertinent.

At 60 pages, however, the solutions they offer are sketchy. Two years’ leave for parents? Nothing like a bit of romantic idealism to lift the holiday mood.

Penelope Lively’s long short story Abroad (Penguin Specials, £1.99) opens optimistically. Narrated by an elderly artist who is reflecting on her travels through Europe in the 1950s, it details the deflation of sentimental national stereotypes as well as the dissolution of a relationship.

As artists, the narrator reflects, “we needed Abroad.” “We needed subject matter. Arresting, evocative subject matter.” Industrial postwar England had nothing inspirational to offer; nor did its countryside. “We didn’t have peasants. Just the rural working class . . . Not colourful. Not picturesque.” But when their car breaks down in rural Spain they realise that their continental counterparts are not bucolic bumpkins but are driven by the same imperatives as their fellow countrymen. Instead of finding the “authentic” experience they are looking for, the idealistic pair realise how “pathetic we were”.

If the narrator feels short-changed by her Spanish hosts, so the reader will feel let down by Lively’s story, which at 24 pages is a thin exploration of cultural difference and the ironies of cultural tourism. Commissioned for the Penguin Specials series, it comes across as a cynical move by both publisher and writer, a way of exploiting marketing trends.

Flash Fiction International: Very Short Stories from Around the World (WW Norton, Kindle Edition, £5.69) also taps into a publishing trend being driven by digital developments: the contemporary popularity of microfiction, which its editors, James Thomas, Robert Shapard and Christopher Merrill, describe as “big ideas in tiny spaces, as short as a sentence”.

Most of the stories are two or three pages long, and within this tight framework writers from China to Zimbabwe express emotions and ideas that range from the scatalogical to the political to the profound. Many of the voices emerge from translations, and this is especially welcome in a publishing sector that is reticent to promote the work of foreign-language authors.

Contributors include contemporary masters of the short story such as Jim Crace, Jon McGregor, Sherman Alexie and Peter Stamm. There are contributions from the Irish writers Nuala Ní Chonchúir, James Claffey, and Ethel Rohan too.

Ní Chonchúir’s The Egg Pyramid is one of the collection’s strongest tales, transforming the brutal facts of Frida Kahlo’s relationship with Diego Rivera into a moving, tragic meditation on betrayal: “when your sister sleeps with your husband, it is like balancing a pyramid of eggs on a glass platter on the top of your head. You dare not move much for fear of what might happen.”

There are also selections from classic authors; as the editors remind us, “flash wasn’t born on the internet.” Petronius’s story The Young Widow, “all the way from Ancient Rome”, is a chilling parable about love and grief that speaks across millennia. Appointment in Samarra, “as retold by W Somerset Maugham”, channels Death himself to relate a wry narrative joke.

With 86 stories — or minicontos, as they are known in Portugal, Kurzestgeschicten in Germany, splancfhicsin in Irish – Flash Fiction International offers the reader brilliant variety and great value. It is just the sort of thing you need for a journey. Even the constant interruptions from young travelling companions whom you might wish you’d left at home won’t dispel the joy in this diverse collection.