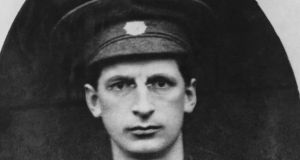 Book Title:
Éamon de Valera: A Will to Power

In 1969 Charles de Gaulle visited Ireland and met Éamon de Valera. The French president paid his Irish counterpart the rare compliment of talking in English, and the two men seem to have got on very well. De Valera was, of course, a tall man, the “Long Fellow” – or “Long Hoor”, as Michael Collins had it – and his son Terry was struck by how rarely he had ever seen anyone walking with his father who was distinctly taller than him.

Their meeting figures in one of the photographs in Prof Ronan Fanning’s crisp, lucid new biography. It helps make the point that de Valera was a world-famous leader, with, as Fanning suggests, “a larger claim than any other Irish politician to the title of statesman”.

Their rapport was perhaps not surprising. Both were above all else nationalists (and, not irrelevantly, Catholics). De Gaulle famously declared that he had, all his life, “a certain idea of France”. It was de Valera’s equally certain idea of Ireland that gave him a pivotal role in the creation of the independent Irish State.

The French leader added that his “idea” was as much a matter of feeling as of reason, and the tension between these things was, as Fanning skilfully demonstrates, a constant element in de Valera’s political career. His almost obsessive attention to detail, especially in drafting political documents, bespoke a cautious, conservative nature, which he threw over now and again – with awful consequences.

Both de Gaulle and de Valera were conviction politicians, and both entered politics from the military. Fanning’s biography, however, introduces us to a comparatively unfamiliar figure: Edward de Valera, a young man who had no interest in either military or political power.

Until his late 20s this Eddie had made a miraculous escape from the depths of the Irish countryside to the fringes of the academic world. It is something of a relief, in light of the almost oppressively austere dignity of his later years, to find that as a junior teacher he stayed out after hours and indulged in “totty-twigging”, watching the girls go by.

Eddie became a lifelong rugby enthusiast in spite of the GAA’s ban on foreign games. He did not Irishise his name until 1908, when he joined the Gaelic League and fell in love with his Irish teacher. His exotic surname could not be Irishised, although it provided the soubriquet by which he would always be known; he would even sign his love letters to his wife (written in English) “Dev”.

Despite his obvious reluctance to join the oathbound Irish Republican Brotherhood (a product, perhaps, of his closeness to the church) de Valera was given a garrison command in the 1916 rebellion. Although his military performance was indecisive, the fact that he was the only garrison commander to survive catapulted him from obscurity to national leadership.

Yet he was still sceptical of politics. He took his time to decide whether the Volunteers should contest elections, as Collins urged. When he did enter politics he carried with him an expectation of command, which could, as Fanning more than once notes, stray outside the bounds of democracy.

Remarkably, de Valera’s ascendancy persisted in spite of his decision to leave Ireland during perhaps the most crucial 18 months of the independence struggle, and his subsequent harping on his life in the Waldorf Astoria while his colleagues were on the run in Dublin. Even Collins, his only real potential rival, stayed surprisingly loyal.

If de Valera remains, as Fanning says, “the most divisive figure in the history of modern Ireland”, it is above all because of the consequences of his rejection of the 1921 Anglo- Irish Treaty. Fanning argues that, unlike the republican purists, he opposed the Treaty not because it was a compromise but because it was not his compromise.

Long before he formulated the idea of “external association” with Britain, de Valera had run into big trouble with Irish-Americans by suggesting an analogy between Ireland and Cuba. External association was a sophisticated concept, but de Valera failed to explain it to his colleagues and get them committed to it, which makes his decision not to lead the negotiating team in London all the more difficult to understand.

Fanning judges his response to the Treaty “petulant, inflammatory, ill-judged, and profoundly undemocratic”. Although it did not create the anti-Treaty IRA (which sidelined Dev with some contempt) it made the split more catastrophic.

The author takes a generally positive view of other controversial issues, such as de Valera’s personal redefinition of the Irish State through the 1937 Constitution. The recognition of the “special position” of the Catholic Church was, as he notes, not so much a surrender to episcopal power as a studied sidelining of it, although that was inevitably lost on those people in Ireland who found the idea of a Catholic state threatening. To make the 26-country State more “Irish” was to further raise the barriers to “reunification”, but for de Valera it was a price worth paying.

Fanning argues plausibly against the negative view of Ireland’s wartime neutrality. Notwithstanding his controversial visit to the German embassy after Hitler’s death, 1945 may have been Dev’s finest hour. Certainly he won the verbal battle with Winston Churchill, whose condemnation of Irish neutrality was outrageous.

Yet it is hard to square Dev’s pious talk of “helping, as far as a small nation can, to bind up some of the wounds of suffering humanity” with his government’s notably ungenerous attitude towards Jewish refugees.

As the title of the chapter “Marking Time” suggests, Fanning does not find much dynamism in de Valera’s postwar career. Still, he argues that if economic growth was retarded by his conservatism, the stability he provided outweighed this.

“De Valera’s Ireland” was less grim than current orthodoxy would have it. But what are we to make of the fact that de Valera never spoke publicly about the grimmest consequence of lack of growth: emigration? Ireland perhaps paid a price for having a statesman fit to stand alongside Charles de Gaulle.

Charles Townshend’s most recent book is The Republic: The Fight for Irish Independence, 1918-1923