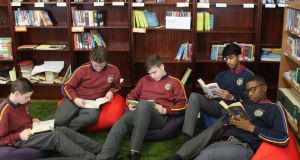 When a teacher posted a request on the Rick O’Shea Bookclub Facebook page, he had no idea the effect it would have. John Menton, the librarian in O’Connell’s Secondary School, near Croke Park, posted a request for any second-hand children’s books in the hope that he might receive donations from locals who no longer needed them.

He explained that the students were in “one of the most socially disadvantaged areas of Ireland, and we accept migrants with very little English. We receive very little funding, and most of our books are donated by staff and parents.”

The post explained that a variety of books would be appreciated, “suitable for readers with a very basic age range, from 4 to more able readers.” He also encouraged donors to “enclose a return address so that the students could send thank-you cards”.

The message touched many of the 10,000 members of the bookclub, and Menton soon received pledges from Dublin-based members and was responding to queries about drop-off venues and receiving book tokens in lieu of physical books. The post found its way to Twitter, gaining more traction than had ever been anticipated. Writers and celebrities including Neil Gaiman and Lenny Henry retweeted the post and the story went viral.

O’Connell’s School, on North Richmond Street, Drumcondra, is steeped in history. Founded in 1828 by Blessed Edmund Rice and the Congregation of the Christian Brothers, its foundation stone was laid by the patriot Daniel O’Connell. Menton said: “With Croke Park casting its broad shadow across our school and grounds, it is hard not to feel inspired walking through the front door every morning.”

I dunno if anyone posted this already but loads of people I know have kids in Dublin who'd probably have a few books, right? pic.twitter.com/IF5cYQI2DG

If you have spare books in Dublin... https://t.co/FVtUufSNBC

However, for most of us, it can be easy to forget that not all children have access to the books that we often take for granted. Menton would like to see more children have access to a variety of books. “The student body in O’Connell’s varies greatly. Our catchment area in the inner city means our school comprises students from a variety of races, beliefs and socio-economic backgrounds. We have students travelling from all across the city, including local places like Sheriff Street and Dorset Street. It is imperative to make sure we send these students home with a book to keep them off the streets.”

“We have targeted our younger readers mostly with books by the fantastic people at Barrington Stoke. Not only are these books dyslexic friendly, but they are accessible for our students who have a lower reading age than their chronological age. The students enjoy the usual teenage lad favourites: Marvel and DC comics, Jeff Kinney’s Diary of a Wimpy Kid, anything by Eoin Colfer! We are eager to get some of the Tom Oldfield biography series in to boost our sports section. Since John Kavanagh’s visit last year, we can’t keep the few copies of Win or Learn on our shelves!” He would love to see some more copies of titles from Jonny Zucker, Alison Hawes, David Orme and John Townsend as they “are accessible to our younger students”.

Menton does all he can to ensure that the boys have an inspiring environment in which to read and learn, with limited funding and a bit of imagination: “The previous librarian had raised funds from staff, pupils and parents alike. When I first arrived, I brought posters from a Movies to Teach society I had set up in college as well as some of my own books and resources from home to boost a library that was aesthetically uninspiring. I cleared out volumes of encyclopaedias and purchased film/football magazines and put them on display to brighten the room. With a sense of devilment, I contacted Hodges & Figgis, Sub-City Comics and Penneys and they sent in some fantastic resources for the library to aid it visually. We have our own Hogwarts castle as we mark the 20th anniversary of Harry Potter and the Philosopher’s Stone, thanks to the wonderful staff at Penneys, O’Connell Street.”

As the school has such a broad spectrum of cultures and nationalities, Menton says “ the highlight of school year is International Week, when diversity is celebrated. It is an exciting place to work!” It also explains why there is a need for easy readers as the library “entertains small groups of EAL (students who are just learning English after arriving in Ireland)” and he organises paired reading for them. “We are very proud of our Gaisce students.”

The librarian had no idea how many people would donate. “I was hoping for a few replies and maybe some dog-eared copies of Diary of a Wimpy Kid or Roald Dahl books, and braced myself for a tidal wave of Dan Brown’s The Da Vinci Code. But the people of Facebook and Twitter have been amazing! I have been inundated with emails, DMs and PMs for requests for specific age ranges and reading levels. People aren’t just clearing out attics or cardboard boxes, they are sending in age-appropriate books! We have gathered Irish, French and German language books to get those classrooms stocked with age-appropriate resources.”

Since then, the books have begun to arrive at the Dublin school and Menton recently shared a photograph of the deliveries with the bookclub. The boys are gearing up for a batch of thank-you notes and they will help sort through all the donations. This is a truly inspiring story which shows how thinking “outside the box” can result in something extraordinary. The students of O’Connell’s are lucky to have Menton. He has ensured that shelves of their school library shall not be bare and that they have access to the wonderful world of the written word.