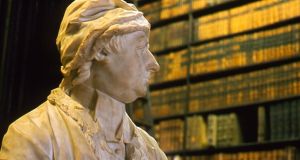 A bust of Jonathan Swift in Trinity College Dublin

Trinity College Dublin is marking the 350th anniversary of Jonathan Swift’s birth this year with a number of activities. There is a display from the Trinity Library’s world-renowned collection of Swift-related books and manuscripts (including a death mask) in the Long Room and an international conference – Swift350 – on June 7th-9th. Leading Swiftian experts will be speaking on themes such as Swift and politics, travel, family and friends.

To reimagine Swift’s Dublin, the Library of Trinity College Dublin has curated a collaborative online exhibition which draws on artifacts relevant to Swift from Trinity and other Dublin institutions: St Patrick’s Cathedral, where Swift was Dean; Marsh’s Library, the oldest public library in Ireland, and much frequented by Swift at the time; and St Patrick’s Hospital, which was built thanks to a bequest left by Swift. The Royal Irish Academy and the National Library have also collaborated.

The library in Trinity has a special role in the history of Swift because the very first piece of documentary evidence of Swift’s existence is among the university archives – his student results. The online exhibition, Discovering the Dean: Jonathan Swift, Trinity College and Dublin City contains the record of Swift as a student in Trinity. He entered College in 1682 at the age of 14. The record of his final year exam reveals that he was male (bad) in philosophy and negligenter in theology, a subject he never cared for even in later life. Among the manuscripts in Trinity is Swift’s memoir in which he records that his degree was awarded speciali gratia, meaning that he only just passed.

Among the mysteries of Swift’s life are the details of his intimate relationships. Hester (or Esther) Johnson, whom Swift named Stella, met Swift in 1689; they became lifelong companions, so much so that there were rumours of marriage. Esther Vanomrigh, whom Swift called Vanessa, met Swift in 1707. They too became very close. The Swift collection in Trinity College has developed partly through gift and bequest and Stella’s “word-book” was the bequest of American Swiftian AC Elias.

Dr Jane Maxwell, principal curator manuscripts & archives research at Trinity, said: “This online collaboration among 21st-century institutions with Swift artifacts permits a reimagining of Dublin city as it was when Swift lived here.”

The international Swift350 conference has been organised by Dr Aileen Douglas and Prof Ian Campbell Ross of Trinity’s School of English in conjunction with UCD’s Professor Andrew Carpenter.

Dr Douglas said: “For a long time 18th-century Protestant writers, like Swift, were seen as not-Irish, but in works like the Drapier’s Letters Swift can be seen beginning to speak for the Irish nation.

“Gulliver’s Travels belongs not just to Irish literature, but to world literature and its relevance only increases over time. Gulliver is always on a voyage, never quite belongs and is in the end totally alienated. In a world of movement and dispossession there is a great deal of resonance there.”
Click here for the online exhibition: Discovering the Dean: Jonathan Swift, Trinity College and Dublin City