Diary of a Short-Sighted Adolescent by Mircea Eliade review: a likeable portrait

A Romanian schoolboy’s novel-cum-journal is funny, lively and defiant 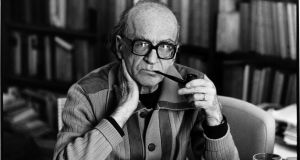 It’s not easy being a teenage intellectual, particularly if you are busy reading Balzac, spend a great time of time agonising about the soul, never do your homework and rarely understand what’s going on in maths class. Then there is the bother of tests, made even more irritating if the question is simple: “But since I didn’t know a thing - because I hadn’t learnt anything during the entire year - I stared at it uncomprehendingly. My lack of knowledge began to make me feel miserable….Around me the other boys were hard at it. Only Malureanu and Colonas were looking at their exercise books with the same fixed gaze as me. The three of us were the most useless at maths in the class.”

The only hope for the unnamed narrator of Mircea Eliade’s lively tale about everyday experience in a lycee in 1920s Bucharest, is to write a novel and get it published. That will show the teachers. It seems a good plan and his resolve is firm: “I’m going to work on it every afternoon. I don’t need inspiration: I only need to record my life, the life I know; besides, I’ve been thinking about the novel for quite some time.”

That mention of time has multiple ironies; Eliade, the great Romanian thinker and writer, who was born in 1907 and was to be recognized as one of the 20th century’s leading authorities on comparative religions, actually did write this book when he was about the same age as his uptight, shrewd and appealingly naive narrator who knows how to lie when necessary. It was never published. Instead, it lingered in an attic in Bucharest to be discovered only after his death which occurred 30 years ago this month, April 22nd, 1986, in Chicago.

By then Eliade who was always torn between eastern mysticism and western modernity, had gone a long way from his cosy boyhood attic. From Romania he had travelled to India where he studied for four years and also completed a doctorate on yoga. After having held various academic posts back in Bucharest and elsewhere in Europe, was offered the Chair of History of Religion at the University of Chicago which he occupied for 29 years. One of his colleagues was Saul Bellow. The American Nobel Literature Laureate spoke at Eliade’s funeral and later, in his final novel Ravelstein which was published in 2000, based Radu Grielescu a Jungian professor troubled by his European past, on Eliade.

Diary of a Short-Sighted Adolescent which is called ‘novel’ in the original which is cleverly acknowledged on the cover of this Istros edition, the first ever publication in English, finally first appeared in Romania in 1989.Christopher Moncrieff who also worked on the French translation published in 1992 has now skilfully guided the wistful, at times petulant and always convincing youthful voice into wry, plain English possessing a hint of an edgy, quasi- confiding quality. After all it is caught between being a journal and a novel. Our young hero has ambitions but he also has doubts.

Between the narrator’s relentless reading which may be the cause of his myopia - which is also ironic - as he does tend to youthful pomposity when not dwelling on elusive romance, there are practical problems to be endured: “It’s true that, this morning, two more spots appeared on my face. I studied them in the mirror for a long time” and he wonders what the heroine, Sonia, in the novel he has just read and which has made him cry, would make of them. “So I asked her. And Sonia replied that she was more impressed by my genius than by the number of spots on my forehead.”

Among the problems with trying to write a novel is the need to talk about it and the narrator does discuss it endlessly with his friends, some of whom not only expect to be in it, they ask to be included and want to appear as handsome and clever as possible.

For the narrator the main thing is that they are good material: “I’d very much like to get to know Dinu, to know him really well, for the purposes of my novel. It’s not enough to simply be aware that he’s handsome, decent, and intelligent. I can sense that there’s something in his soul that eludes the rest of us. Why is it that he is showing less and less interest in chemistry these days?”

Then there is Marcu: “He sits at the back of the class and reads French novels……if people climb onto the desks, he puts his fingers in his ears and keeps on reading.Even if a fight breaks out at the desk next to him, he simply moves to another desk nd continues to read..” even when a master is present. Marcu gets teased because he is Jewish and although the anti-Semitic theme appears to be about to surface, it does not. This is interesting considering the prevailing attitudes of many Romanian intellectuals who were involved in the Iron Guard. Eliade’s support of the fascist element dismayed his exact contemporary and one-time friend Mihail Sebastian, author of a landmark journal charting the years 1935 to 1944, whose philosophical second novel For Two Thousand Years was first published in 1934. It was re-issued earlier this year in a brilliant translation by the Irish writer, Bucharest-based Philip O Ceallaigh who will be participating in an event in London next week which will be looking at Romanian writing.

These two novels could almost be read as companion pieces as Sebastian’s first-person narrative takes place in the university where anti-Semitic attacks are part of the daily routine. Sebastian’s slightly older, more solemn narrator is as detached and passive as Sebastian was in life and as ambitious as Eliade’s teenager.

Most readers will think an earlier variation of Adrian Mole has surfaced with a far more sophisticated interest in literature and philosophical streak. He is less knowing than Holden Caulfield and far more likeable, more believable. It is a portrait of an artist with a heightened vulnerability: “I’ve never kissed apricot blossom. But I’ve bitten my lip because I don’t know who I am. I’ve asked myself a thousand questions and tortured myself to find the answers…..”

Yet the various sequences featuring the student drama society are very funny. Here is a self-serious narrator who admits to not knowing the neighbours as they don’t have daughters and who considers suicide as a way of avoiding an exam. It is a young man’s book; alive and defiant complete with schoolboy bravado, competitive friendship and a very human longing to succeed at something. Fresh and devoid of hindsight, it re-opens the classroom door and the days when each of us tried to read more than everyone else.