Breandán Mac Suibhne, winner of the inaugural Michel Déon Prize, on its importance 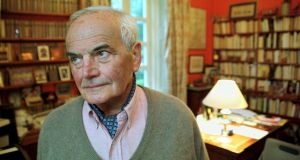 Michel Déon at his home in Tynagh, Co Galway, in 2000. Photograph: Joe O’Shaughnessy

He met her only twice, yet he never forgot her. He was Michel Déon, an emerging French writer. And she, to him, was Big Sarah. It was 1956, the year that Déon, then in his mid-thirties, first visited Ireland. “She wore a wide black skirt and waistcoat”, he remembered, “and huge boots and a multicoloured shawl thrown over her shoulders and had a long grey plait that hung down onto her chest.” And she used to walk the roads of Donegal, Mayo, and Connemara, swinging a bundle filled with a few rags, potatoes, that she would cook in ashes, and some beer, all the while repeating conversations with the dead.

The dead were her husband and six children. Her journeying had begun when her last child died: “she had left her house to walk, simply to walk and to talk to herself out loud, asking questions and providing the answers for the invisible interlocutors, without varying the tone.” To Déon, it was as if she been walking “for centuries.”

There were scheduled stops in her journey, that she never varied yet could not explain. In the towns on her “closed circuit,” she would rest in little grocers-cum-haberdashers-cum-post-offices, places piled with assorted bric-a-brac. People were kind to her. They would pull up a chair, and she would sit and stretch out her long legs. And as she sat there, piecing together those dialogues with the dead, they would slip potatoes and beer into her bundle.

Half a century later, when Déon wrote of Big Sarah in a book on Ireland, Cavalier, passe ton chemin! Pages irlandaises (Gallimard, 2005), he could still see her face: “the nose of a Greek statue stuck in the noble visage of an Inca mummy, the cheeks furrowed with wrinkles converging on lips, which were still beautiful despite her lack of teeth.” It was a face “radiant with goodness, generosity and dreams”. “Hers was really a wild beauty”, he recalled, “the reigning spirit of bogs, of dark water, and of mountains lost in fog.” And he narrated in that same book, since carefully translated by critic Clíona Ní Ríordáin for a Lilliput Press edition (2017), snatches of the dialogues that had become monologues:

She said: “Mother, I will have my own children.”

Her brother said: “He won’t give you any children, he doesn’t know how to f--“.

I said: “Are you going to stop the world from turning too? And what about me? You are both saying filthy things. Your father, who is in Heaven with the Father, can hear you, and he is waiting for you.”

Déon met her the second and last time on the road to Maam. He was driving and she was walking “in a way that is unusual in women-stubborn and steady, with big strides, like a foot soldier.” It was raining and he offered her a lift. She declined, proceeding to relate a conversation with her dead son:

I said: “The fish will be there all the other days.”

He said: “You never eat anyway.”

I said: “Your life is worth more than a herring.”

He said: “I’m not sure; that’s the way it is anyway. I have three children. Who will feed them if I don’t go out?”

I said: “Farewell, my beloved boy.”

Déon listened, as tears coursed down the woman’s cheeks, and then, when she had finished, he watched through the steamed-up windscreen as she walked away with her “magnificent step”, and years later, remembering that last encounter, he imagined that one day “she must have gone to sleep by the side of Lough Mask and sunk slowly into the springy earth where bull irises grow, spirits of the bog who delight in welcoming bodies exhausted by grief and immortal souls.” Michel Déon himself died in Galway in 2016, aged 97. He had settled in Ireland in 1968, eventually purchasing an old rectory in Tynagh, south Galway, and while there he raised a family and consolidated a reputation as one of France’s great writers.

I was born in 1969 and, in my childhood, one still encountered people like Big Sarah-“wanderers”, as Déon described them, “who spill their interior monologues on the sides of the roads”-and other footloose people and a few became familiar to me. But more familiar, more dear to me were people whose mode of living, on small holdings, I now imagine to have been similar to that of Big Sarah, before she commenced her closed circuit.

Writing The End of Outrage (Oxford University Press, 2017) was my effort to do some justice to those people-my grandparents and people of their generation, born around 1900, in south-west Donegal-by going back beyond their own time the better to understand them and what was lost and what was gained in the making of their world. I look at the book now and, for sure, I see faults, mainly things not put down on paper. But they are small things and, on the whole, I am glad that I wrote it, just as, I imagine, Michel Déon was glad to have written about a woman he met only twice, her prayers and tears.

In 2018 the Royal Irish Academy, with the support of the Department of Foreign Affairs, instituted a prize for writing named after Michel Déon. It was an enlightened initiative that will fasten Ireland’s relationship with France and perpetuate the memory of a significant cultural figure. And it is one too that, when this current crisis is over, the Academy and the Department should consider replicating, for other forms of cultural production, with other countries with which Ireland has had a long connection.

I was fortunate that The End of Outrage won the inaugural prize. And I was surprised too, for there were many fine books eligible for it. Perhaps, however, Michel Déon would have approved of the first award going to a history cum memoir centering on a few green fields that rise above a bog beyond Ardara. After all, he himself spent about half his long life in the west of Ireland, and he described one of his own novels as being “tout imprégné des paysages d’herbe brune, d’étangs noirs, de tourbières et de rocailles”, totally impregnated with brown grasses, black loughs, bogs and rocky outcrops. And he was a close observer too of the changes that came over the place in the sixty years from his first visit, back in summer 1956, when he met Big Sarah, down to 2016.

Readers – and people who have not read much in a long time are reading now – can nominate nonfiction titles for the next prize at ria.ie

Nonfiction is a capacious category, with the arc extending from research in history, anthropology and political science through criticism, biography, and autobiography. But whatever book receives the next award, the author will doubtless find, as I have found, that the Michel Déon Prize immediately opens doors and always remains an honour.